If you’re a masochist, then you’ll love the torture of SUPER GHOULS N GHOSTS

Guest Writers are authors, screenwriters, directors, producers, or anyone that we feel has something to say that needs to be heard. 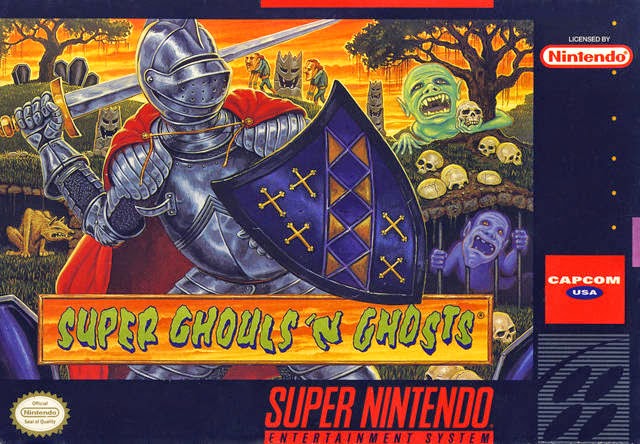 You know, I can’t say this game is SCARY, or HORRIFYING in the traditional sense, but do you know what makes it frightening? How downright difficult and unforgiving it is!

I had the luxury of snagging a copy of SUPER GHOULS N GHOSTS recently, and I couldn’t resist popping it into the ‘ol Super Nintendo and giving it another whirl. Lo and behold, and much to my lack of surprise, the game frustrated me to no ends just like it did years ago. Sure, it’s not as bad as the original for the NES, or if you happened to play the one in the arcade which is ten times as worse, probably because you had to keep feeding it quarters, but the Super Nintendo version sequel is a quest for video gaming justice in it’s own right.

When you think about Ghosts ‘N Goblins, or Ghouls N Ghosts, the first thing you really think about is a naked guy running through a cemetery, right? Half the game you’re playing as a naked dude in tighty whities. Don’t let that box art fool you. You’ll be lucky to hang on to armor for a minutes worth of gameplay.

Hell, I even did an art piece awhile back for a corporate charity event. Check it out! (have copies of this for sale if anyone wants it…NUDGE NUDGE) 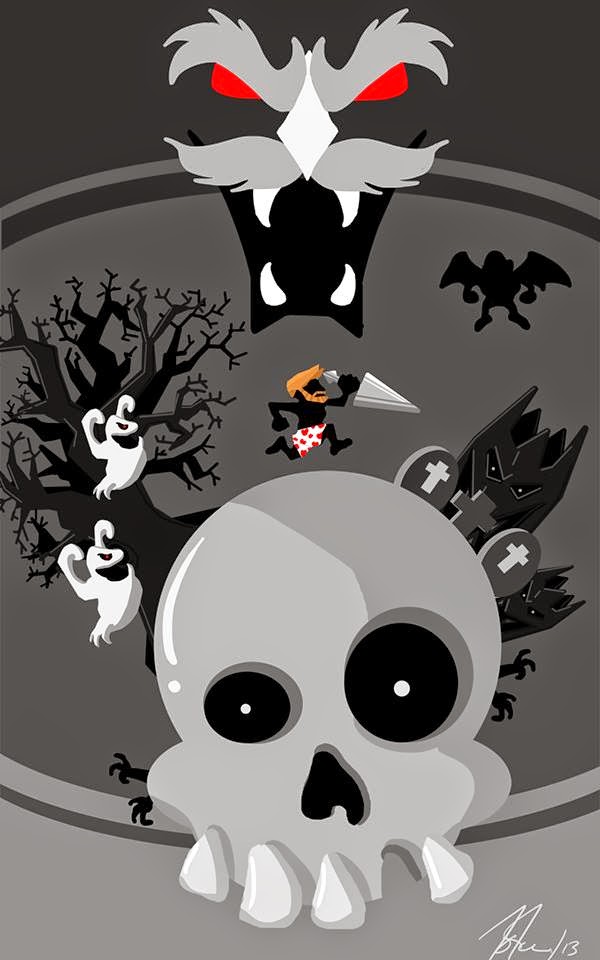 One of the things about this game, that makes it so memorable, is the fact that you really enjoyed how difficult it was. Ghouls N Ghosts and its predecessor plays games with you the entire time. It messes with your head, and the fact that moving past one screen on a single stage is an accomplishment makes you struggle for every single inch of ground. I can’t say the same for the sequels that are on the newer generation systems, as they were far too easy in comparison.

Ready to jump into Arthur’s heart undies and kick some ghoulish arse? Hope so, because here we go.

OH and side note – if you haven’t checked it out already, be sure to check out AVGN’s play through of Super Ghouls ‘N Ghosts – tis absolutely epic. 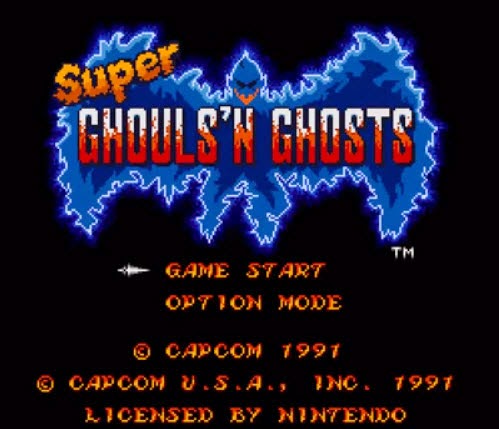 Looks like the Princess has been kidnapped by demons again, so it’s up to Arthur, knight extraordinaire to save the day. Certainly there has to be an army that’s available to travel through the confines of hell? No? No Army? Of course not…one man is all that is needed. A man named Arthur!

You must fight your way through numerous levels, reach Emperor Sardius’ castle and defeat him before he discovers the true location of the Goddess Amulet and is granted immortality. Unfortunately it’s not that easy. We’ve got one of these games here where you play through the entire game once, and get the FIRST ending, but then you have to play through it again to get the ACTUAL ending.

Yeah, no thanks. First of all, I don’t have the patience to play a game twice anymore, and especially not a game that just destroys your self-esteem and worth as a gamer like this game does. I can barely get past the first stage as it is.

And with Arthur as your avatar, you will be dying a lot. Arthur has three chances for an armor upgrade. You’ve got your standard Iron armor, which can be upgraded to bronze armor which increases your attack power. After the bronze, you’ve got gold which further enhances his attack as well as giving him special attacks and a shield. Finally, you’ve got a SUPER SHIELD which allows you to block a few projectile attacks before its destroyed. The real kicker though? One hit by ANY ENEMY..and your naked…and once you’re naked, another hit will kill you.

And you will be naked…A LOT. 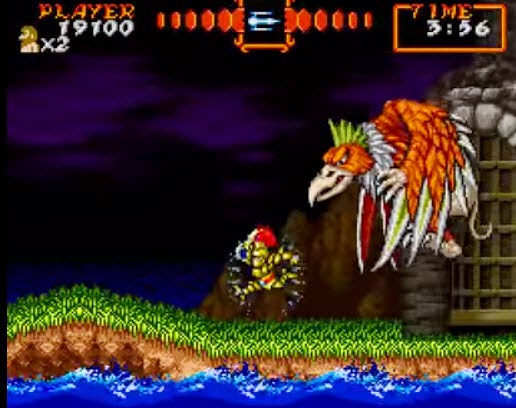 Most of your time in this game will be spent spamming whatever weapon you have available to destroy the endless onslaught of enemies that will appear on the screen. Besides being completely outnumbered, outmatched, and outmaneuvered by these enemies, you will also have to deal with semi-annoying platforming elements like jumping over death pits, and maintaining your position on floating rafts while giant fish monsters try to knock you off. Sounds like a blast right? It really is ha!

One of the best things about this game ARE the enemies. There are so many different varieties and each new level introduces a new baddie who has the sole purpose of pissing you off. They’ll appear out of nowhere, and when you least expect it. Trying to make that jump on to the next platform? Watch out for that magic ice timber wolf that just happens to spawn on the ledge. YAY!

And let’s not even bring up our favorite RED DEMON. Come on, you know who I’m talking about….damn you firebrand!

You’ll run into treasure chests quite often, but here is where you have to be careful. Treasure chests aren’t always a good thing. Occasionally you will be wanting to hold on to a weapon you have, and by opening a chest you may be stuck with getting something you don’t want. Like that epic-ally horrible seek and destroy dagger that just fires off in random directions and NEVER hits what you want. 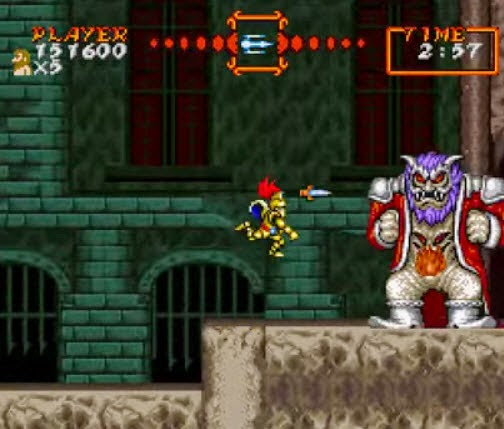 One of the best features introduced into SUPER GHOULS N GHOSTS has to be the ever-so-important DOUBLE JUMP. Trust me when I say this that I would spend the first few minutes of playing this game mastering this necessary technique, as there are points in the game where you need to be a pro at doing it, or you’re not going to be able to make certain platforming jumps. Not to mention, it’s a critical game mechanic that’ll allow you to avoid certain monsters and save your life when you need it most. 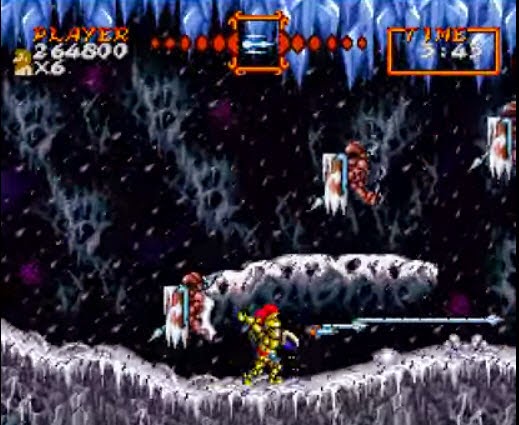 Artistically, this is one of my favorite Super Nintendo games just to admire from afar and not be stressed out by the gameplay. The level design, the maps, and the enemy / character animations are spot on. It’s really difficult to expect anything less from Capcom, so there’s no surprise that I love it so much.

The music and sound is just as astounding with one of the most dramatic soundtracks for the Super Nintendo. Each level pulls you in with this creepy, ghoulish theme that beckons you into the darkness. Buhahahahhahaa.

What can I say? This game is for masochists. For those of you who enjoy the challenge and like the fact that you never know when you reached an actual checkpoint in a level, then this is a game for you. Heck, I applaud those who have even sat through and beaten the game for it’s true ending, because I for one could never do so.

But you know what? Maybe now’s the time. So I’m going to make it my goal over the weekend to make it happen. It won’t, but at least I can say that Arthur and his heart filled underpants gave it their all.

Final Score (out of 5 Zombie Heads) :

Until next time, remember: Aim for the Head!

← Prev: The Zombies: Volume One Next: Horror-Comedies Every Horror Fan Should See → 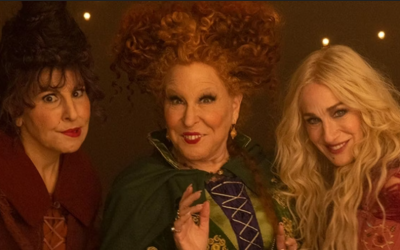 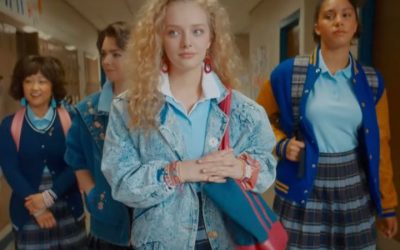 As if being a teenage girl isn't bad enough, the loyalty of a group of friends is put to the test when one of them,...