MidWest WeirdFest once again serves up cinema fare from the mythical to the mind-bending with the reveal of its first wave announcement for this year’s edition. Fans of fear fare and the fantastic alike will find plenty to get excited about regarding the first seven feature films announced. Following is the official press announcement.

MidWest WeirdFest announces its first programming wave for 2022 today. The cinematic celebration of all things fantastic, frightening, paranormal, and just plain weird, is now in its 6th year. The festival takes place March 4-6, 2022 at the Micon Downtown Cinema in Eau Claire, Wisconsin.

“Get ready for the fest’s weirdest and most wonderful season yet!” says MidWest WeirdFest founder and programming director Dean Bertram. “From a record number of films submitted to the festival this year, we’ve assembled an unmissable program of horror, science fiction, fantasy, documentary, and underground gems. The first wave announcement gives a glimpse at just some of this year’s dark and fantastic offerings: From metaphysical mind-benders featuring UFO contactees and New Age cultists, through terrifying tales of supernatural forest dwellers, re-animated monsters, and black gloved serial killers, to genre-bending sci-fi noir and a documentary loaded with your favorite horror film creators and heavy metal musicians.”

Individual tickets to each film will go on sale closer to the festival; both on the fest’s website, and directly from the Micon Downtown Cinema in Eau Claire, Wisconsin.

Full program details and filmmaker guests will be revealed in the coming weeks.

THE GIRL IN THE STRAW HAT (dir: David James Schultz) A young couple in a deteriorating relationship find themselves led down a dangerous, obsessive path of self-discovery at the hands of a New Age doctor with mysterious intentions. Captivating performances from the film’s three leads (Michael LoSchiavo, Kristen Tomanocy, and James Sharpe), pitch-perfect direction, gorgeous cinematography, and a twisting metaphysical screenplay, elevate this psychological thriller to a space all of its own. 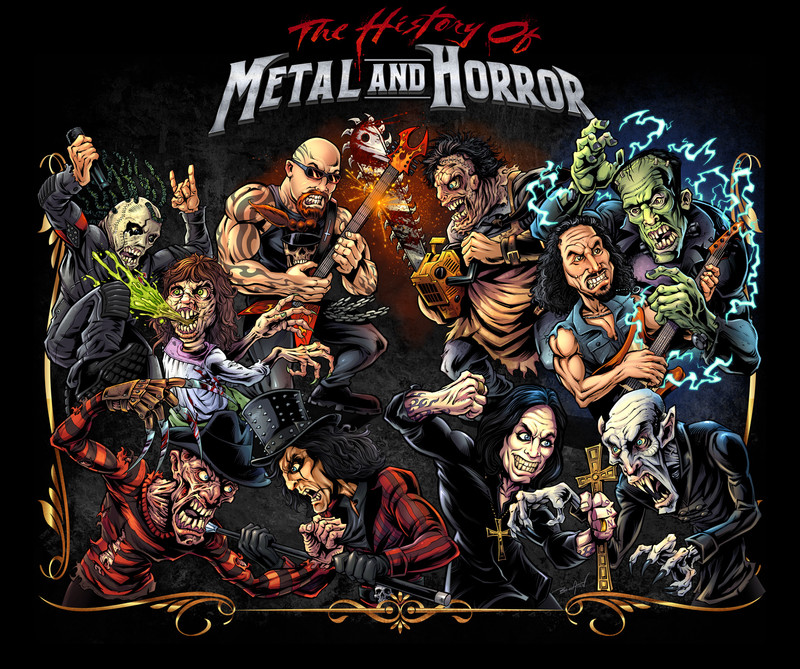 THE HISTORY OF METAL AND HORROR (dir: Mike Schiff) A captivating documentary that explores the history of heavy metal and horror films, and how the two genres merged over time. Hosted by Michael Berryman, and featuring Alice Cooper, Rob Zombie, Kirk Hammett, John Carpenter, Tom Savini, Dave Mustaine, Jonathan Davis, Corey Taylor, and many more.  THE HISTORY OF METAL AND HORROR is a bloody and unmissable buffet for horror and heavy metal fans: loaded with clips from your favorite films and accompanied by a cornucopia of fascinating interviews with the genres’ biggest names.

THE LAST FRANKENSTEIN (director: David Weaver)  Dr. Jason Frankenstein, the last of his family, finds himself frustratingly approaching the middle of his life with little progress to show towards carrying forward his family’s experiment. But after a creature from his past returns, he is catalyzed to finally complete his work. With the help of two drug dealing paramedics and a nurse with a shady past, he sets down the blood-soaked path to create a living being from the bodies of the dead. This gripping film is a brutal, relentless, and clever update to the classic monster tale.

LIGHTSHIPS (director: John Harrigan) Eve awakes in an unstaffed medical facility, awaiting diagnosis for a mystery illness. With no recollection of how, why or when she was admitted, she joins a group of outcast patients, who are attempting to recall what takes place during treatment inside a terrifying room known as the hole – a psychoactive space where testing takes place and encoded instructions are administered that each patient must follow if they wish to heal. But an alien world at the edge of Eve’s dreams begins to bleed through, compelling her to write the transmissions down. Based on the book ‘Remembrance’ by celebrated UFO contactee Maryann Rada, LIGHTSHIPS weaves a potent spell that penetrates and resonates deep inside the viewer’s subconscious.

LUNAMANCER (dir: Noah Mucci) Dr. Issac Blake returns to post-industrial upstate New York after sensing a psychic break with his estranged twin sister. He steals a car, acquires a crowbar and forces his way into her house – but she’s not there. All that remains are strange echoes from the place where she’s trapped. He traces these resonances to a Lunamancer able to draw power from the moon to shift reality around him. Issac must cross over the spectral realm to pry her soul free from the Lunamancer – no matter how many crowbars it takes. This engrossing low-fi sci-fi weaves a striking cinematic realm, that exists somewhere between THE MATRIX and TAXI DRIVER.

NIGHT CALLER (dir: Chad Ferrin) Fest alumnus Chad Ferrin (THE DEEP ONES, THE CHAIR) is back! This time with a brutal, giallo inspired, slasher flick: Wherein a telephone psychic is pulled into a complex web of mystery after receiving a call from a serial killer. True to form, Ferrin collaborates with an incredible ensemble cast to bring to screen the stuff of nightmares; all the while riffing on classic works from Hitchcock, through Argento and Ferrara, to the broader 70s crime genre. NIGHT CRAWLER cements Ferrin’s position as a new master of the genre.

WOODLAND GREY (dir: Adam Reider) A man living alone in the deep woods finds Emily, a hiker, unconscious and laying on the forest floor. He brings her back to his home and helps her get back to health so she can leave the forest and get home. After a few tense days coexisting, Emily makes a discovery. She finds a crudely built shed behind the man’s home. When she opens it, she unleashes something truly haunting. As Emily and the man come to terms with what has been released, they also attempt to find a way out of the forest, which isn’t exactly what it seems.  WOODLAND GREY resonates with the unease and mounting terror of an inescapable fever dream.

← Prev: Naomi Watts Races Against Time In 'The Desperate Hour' (Trailer) Next: Award-Winning Vampire Film 'All The Moons' Coming To Shudder →