Cynema: It’s All About Me

OK, I watched this movie a billion times and everytime it gets better and better. One time I saw it 3 times in one day. I watched it in English then dubbed in French then in English. I am actually going to watch it now. THAT’S HOW MUCH I LOVE THIS MOVIE!!! — NetflixReview for Fargo

The reviewer watched Fargo a “billion times.” The film runs 98 minutes. So 98 minutes times 1 billion…you get the point. Not only did this “reviewer” watch it three times in one day, they watched it in all the available dubbed languages and then continued to let us know that they are going to spend more time watching it right at the moment we are reading their review. Then to add emphasis, as if all of this were not enough, writes ALL IN CAPS HOW MUCH THEY LOVE FARGO! (as if we didn’t get it, the caps sure cleared things up.)

Part of Cynema is the inability of an audience to use critical thinking and separate emotion and the odd belief the movie and its subsequent review are all about them.

Where is the REVIEW for Fargo? It’s very clear this statement is all about the author. There is no criticism, no analysis and not a shred of critical thinking. It’s about me! I love this movie. I enjoyed this movie. It’s my favorite movie! Fortunately Fargo is not an example of Cynema and such enthusiasm for this quality, tight dark film can be understood. Let’s use Fargo for one other example that moves us closer to the point:

I don’t think people would be writing about how funny this movie is if they saw a real murder like I did in real life.  — Another Netflix  Review for Fargo

This is a movie review, not a therapy session. What does this have to do with this film? This is not an objective review on a piece of culture. This is a person working out mental trauma in a public forum to draw attention to themselves. If this person insists on sharing their private pain they should  see a therapist rather than putting it onto The Net. What this has to do with them and the horrible thing they experienced and their view that others would change their mind and position on Fargo leads to one answer…the reviewer needs to exorcise their demons in a more “appropriate” place.

I liked this movie except for the unnecessary comment about peanut butter and food allergies when Marmaduke goes on a date with Gesabelle. Give me a break! Don’t use movies as a tool to target people with food allergies. Almond butter is a tree nut and many have allergies to both peanuts and tree nuts. So NOT funny! — Netflix review for the movie, Marmaduke

How does this constitute a review? This reviewer, like many, seem to think the movie making process was all about them; using language like “target” and for some reason has to educate the world on nut allergies. There’s nut talk all right and it reflects a growing narcissism in the culture and the inability to use rational, intelligent thought to make a point. Self-centered emotionalism has taken over and has created a dangerous smokescreen.

The real danger in Marmaduke  is not nut allergies but rather it is a film that isn’t a film. It is a prefabricated showcase of product placement and over produced auto-tuned songs stitched together with bad CGI and mediocre human talent and passed off as “good family entertainment” to the masses that embrace it. It is mediocrity realized and seen as acceptable by an audience that doesn’t know better and doesn’t want to. The 1980 film Popeye is perhaps the most debated in Robin Williams’s career. Wrongly perceived as a boxoffice bomb, Williams criticized the film and generally regarded his first feature film choice as a grave mistake. However the film was financially successful but still drove acclaimed director Robert Altman into exile, shunned by the Hollywood studio system as Popeye was considered Altman’s Heaven’s Gate. I will argue it’s his best film. 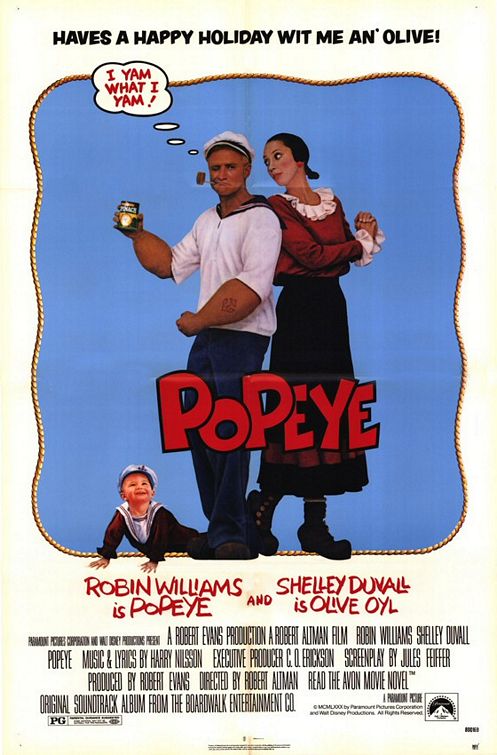 “Don’t you know Popeye was bad for everybody?!” – Robin Williams in a stand up routine on his own film

I can understand the negative reviews–the film was not what many were expecting. Popeye will be discussed in detail later as another example of when filmmakers (especially screenwriters) resist Cynema and pay a steep price for breaking the Hollywood mold.

Here is a review from a Netflix on Popeye: (All emphasis, spelling errors, etc. intact)

I LOVE Robin Williams (he and I share a birthday, 30 years apart) and I love Shelly Duvall for her acting in The Shining and other such greats as Faerie Tale Forest… But, this movie just bombed. I remember I hated it years ago, and thought Id give it another chance- and here we are— and YES it sucked again!

Once again the review is not about the film, but about the reviewer. They insist on telling us that they “share” a birthday with star, Robin Williams. No they don’t. They have nothing in common with Robin Williams except watching his movies. That’s it. How does the delusion of “birthday sharing” constitute a movie review? How does that give this reviewer any kind of credibility? The reviewer never met Robin Williams nor shares any personal relationship, so the word “love” is another example of overused hyperbole. The reviewer also “loves” Duvall so much she gets the name of Duvall’s program wrong, as it is Faerie Tale Theatre.  The reviewer then teases with the possibility of making a real critique involving Shelley Duvall’s acting. Instead it becomes another “Me” list with the reviewer’s personal favorite films. Nothing is said about the overwhelming positive reviews on Duvall’s turn as Olive Oyl, with some critics who derided the film confessing an Oscar nomination should not have been out of the question. If the reviewer “LOVES” Robin Williams, what about a look at his performance as the iconic cartoon sailor. The reviewer loves him, but won’t even spare a few sentences on his performance, even if they didn’t like it?

…thought Id give it another chance- and here we are— and YES it sucked again!

With nothing to support this review but personal feeling, the author drops the generic “sucked” to sum it all up. They could have saved a lot of time and just wrote a single line: This movie sucked. Maybe a “review” of this review should ask for the last two minutes of my life back for the time wasted in reading and writing about this idiotic assessment of Popeye.

All reviews are biased, but this trend of self-centered amateur public reviewers making reviews all about them stunts the ability of a society to objectively assess the culture it creates and improve upon it. How can filmmaking advance when the audience that consumes the product becomes less demanding and is lulled into a indifferent state of mind where anything is accepted and worse is seen as high quality or: amazing, incredible, awesome, epic…

Your Movie Sucks: Roger Ebert Chimes In With Some Critical Thinking 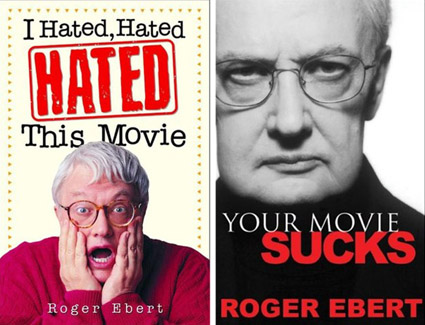 Roger Ebert, the esteemed and almost godlike film reviewer for the Chicago Sun Times had a brief feud with actor Rob Schneider. In 2005 Los Angeles Times film critic Patrick Goldstein wrote a review of Rob Schneider’s Deuce Bigalow: European Gigolo. With tongue in cheek, he wryly wrote that Schneider’s film had been snubbed for an Oscar nomination because “nobody had the foresight to invent a category for Best Running Penis Joke Delivered by a Third-Rate Comic.”

Whether Schneider was truly offended or saw an opportunity to generate press for himself (using the old Hollywood axiom that bad press is better than no press at all), he took out full page ads in major Hollywood trades. He claimed he researched Goldstein and found that he never won a single journalistic award. His ads also said this in his counter attack on Goldstein:

Maybe you didn’t win a Pulitzer Prize because they haven’t invented a category for “Best Third-Rate, Unfunny Pompous Reporter Who’s Never Been Acknowledged by His Peers.” …Patrick, I can honestly say that if I sat with you and your colleagues at a luncheon, afterwards, they’d say ‘You know, that Rob Schneider is a pretty intelligent guy, I hope we can do that again.’ Whereas, if you sat with my colleagues, after lunch, you would just be beaten beyond recognition. Rob Schneider’s response to Goldstein

Obviously wounded, Schneider went on to call Goldstein a “scumbag” on Tom Green’s TV show (17:13 into the video) and basically accused Goldstein of being a substandard critic. Patrick Goldstein did respond and publicly asked: “Who are Schneider’s colleagues and why would I want to have lunch with them?”

This public back and forth attracted the attention of film critic deity Roger Ebert and he entered the fray with some information he dug up on Patrick Goldstein. Ebert found through research that Goldstein not only had peer recognition, he had indeed won a number of awards: National Headline Award, the Los Angeles Press Club Award, a Rockcritics.com award and the lifetime achievement award from the Publicist’s Guild.

Ebert took to his internationally syndicated column and printed this information and as if enough egg wasn’t thrown in Schneider’s face, Ebert punctuated it with this now famous personal statement to Rob Schneider:

…Schneider is correct; Patrick Goldstein has not yet won a Pulitzer Prize. Therefore, Goldstein is not qualified to complain that Columbia financed “Deuce Bigalow: European Gigolo” while passing on the opportunity to participate in “Million Dollar Baby,” “Ray,” “The Aviator,” “Sideways” and “Finding Neverland.” As chance would have it, I have won the Pulitzer Prize, and so I am qualified. Speaking in my official capacity as a Pulitzer Prize winner, Mr. Schneider, your movie sucks. Roger Ebert

To Schneider’s credit, when Roger Ebert fell gravely ill with cancer and lost most of his jaw to the disease, Schneider sent him flowers with a card reading: “Your least favorite actor, Rob Schneider.” Both men have made their peace with Ebert declaring publicly that Schneider may make bad movies but he’s not a bad guy.

With a single stroke of logic and fact, Ebert put out the fire between Schneider and Goldstein and perhaps gave Schneider something to think about, and that maybe it wasn’t all about him. Ebert’s deft handling of the situation, while hardly a national crisis, showed reserve and even respect for Schneider as he stayed away from a personal attack against the actor. He assessed the actor’s body of work and found himself qualified in his usual perceptive review to criticize Deuce Bigalow while adding a humorous punchline with “your movie sucks.”

Ebert didn’t use “sucks” as the foundation of his review. He used the term in the proper context–as a useless exaggeration for fun, not to intelligently assess a piece of popular culture.

Ebert also used restrained dialogue to foster civil discourse that in the end showed he didn’t take himself or the media feud all that seriously. “True power is never having to use it.” Roger Ebert had the power to destroy Rob Schneider with the vast power of his column as well as much of Hollywood behind him. If he wanted to he could have knocked down Schneider’s career like a house of cards.

Schneider made it personal and in the end set things right personally, especially now in the wake of Ebert’s death. However for audiences, it isn’t about you. No one cares about your allergies, birthday or even traumatic events as much as you think they should.

← Prev: The Exorcism Of Molly Hartley Coming This October Next: Interview: Chris Welsh Of "Wart-The Comic" →