David McGreavy was serving a life sentence for the murder of three children he was babysitting in 1973. McGreavy was called the “Monster of Worchester” due to how he murdered the children, all siblings, but he was also called the “Real Friday the 13th Killer” as the murders took place on the 13th of Friday in April of 1973.

McGreavy was living with the Ralph family as he was friends with the children’s father, Clive Ralph. Both Clive and his wife worked nights leaving McGreavy to babysit the children but on that fateful night, McGreavy was drunk and he had a history of being a violent drunk as well. 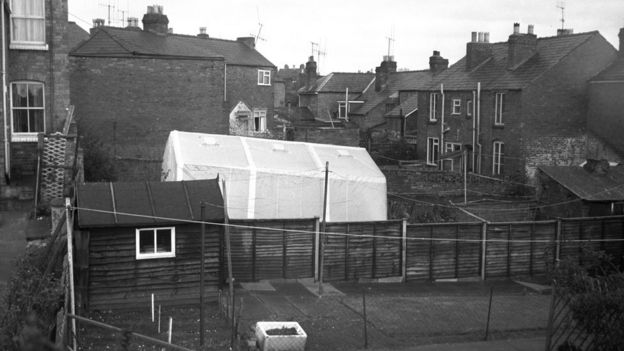 The crime scene covered by a tent

Shortly before the killings, McGreavy was at a pub with a friend and drank 5-7 pints of beer. After arriving back at the Ralph residence, he broke the skull of 8-month old Samantha, slit the throat of 2-year old Dawn, and strangled 4-year old Paul. Afterward, McGreavy took a pickax and mutilated the bodies. Then what he did next was something out of a horror movie, he impaled all three of the children’s bodies on a neighbors rod iron fence!

McGreavy reported the motive for the killing was because the youngest child, Samantha, would not stop crying and it infuriated him while in his drunken state. David McGreavy was given multiple life sentences after an eight-minute hearing where he pleads guilty. After only serving 45 years (40 of which was in protective custody after he was frequently “abused” by other prisoners) the parole board felt that McGreavy has “changed considerably” after undergoing rehabilitation for his anger.