Movie Review: ‘Halloween Kills’ But That’s About It 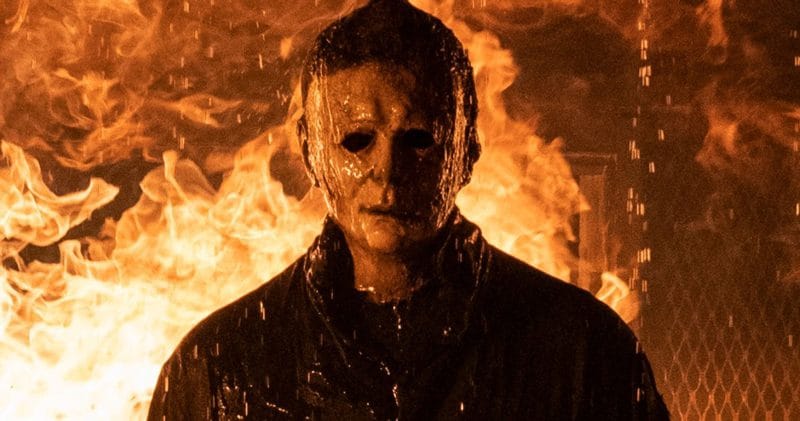 Halloween Kills has just premiered exclusively on Peacock. Those who aren’t subscribers will have to sign up for the service at the cost of $4.99 a month which isn’t bad. It’s cheaper than a rental or a ticket to theaters.

The last we saw the Strode women in Halloween, they had trapped Michael in Laurie’s basement and set the house on fire. But in true Myers fashion, “the shape” found his way out as firefighters converged on the house which was completely engulfed in flames. Laurie has survived Michael’s attack and is in the hospital when all hell breaks loose as crowds of residents gather chanting “Evil dies tonight!” led by Tommy Doyle (Anthony Michael Hall) who survived Michael as a boy. We actually see quite a few characters return from the franchise, only to quickly see them be killed off. The movie features more kills than any other installment of the franchise, but that doesn’t mean it has a good story. It just feels sloppy.

Much of the movie sees Laurie layed up in a hospital bed, taking her out of the action almost completely. Instead, we see her daughter and grandaughter make stupid decision after stupid decision, setting out to hunt Michael along with crowds of people. I think we all know that’s just insane. By now, the town should know he’s no regular killer. In fact, he’s gone from a deranged killer to an all-out unstoppable supernatural boogeyman. That’s evident from the beginning when he survives the fire no one else could. Also, his mask would have been completely melted, not just have minimal charring on one side, which was confirmed when I discussed it with a real firefighter (the little things count).

The film thrives on chaos. I mean groups of folks hunting Michael? Have they learned nothing after 40 years of attacks? To top it off, the groups are toting weapons like baseball bats, 2x4s, and firearms, and 90% of them couldn’t hit the broad side of a barn. Really? I mean really? It’s a bit insulting. Director David Gordon Green and co-writers Danny McBride and Scott Teems, spend a lot of time on the survivors’ stories and the building of the mob, putting names to the faces as survivors and neighbors in an attempt to make us feel for the characters, but they uncerimonisly kill them like they mean nothing in over-the-top ways, signaling to viewers that it’s all in the name of fun, while making sure that it isn’t.

I will give the movie this, Jamie Lee Curtis, Judy Greer, Andi Matichak, and Anthony Michael Hall did great with the roles they are given. The acting is not the problem with the movie, the story is.

Halloween Kills pays homage to the franchise in several ways besides with the survivors, including the opening credits. We also see the three masks from Halloween III in a scene where Michael kills a group and puts the witch, pumpkin, and skull masks on them as he poses them to be discovered.

The 1978 original is one of the most iconic horror films ever made, it’s intense, suspenseful, and scary, Halloween Kills is none of those things. It feels like it’s just a snack, tiding fans over until the real meal, the final film of the trilogy, Halloween Ends, arrives.