Toronto, Canada’s Blood in the Snow Film Festival (BITS) hosts a hybrid edition this year, with a virtual festival running this weekend (information at https://www.bloodinthesnow.ca/) from October 29-31 and a just-announced in-theater lineup for November 18-23 at the Royal Cinema. From hilarious horror comedies such as Vicious Fun to darker offerings such as Canadian folk horror The Family and styles of fear fare in between are world, national, and local premieres of feature-length and short fright fare films. Following is the official press announcement.

Blood in the Snow Film Festival (BITS), a unique and imaginative showcase of contemporary Canadian horror films, is pleased to announce the lineup for the in-theatre portion of this year’s hybrid festival taking place November 18—23 at the Royal Cinema.

“After being forced to take a break from in-person gatherings due to the COVID 19 pandemic and pivoting to a virtual format with the help of Super Channel in 2020, we are thrilled to be able to welcome festival fans back to the Royal Cinema this year,” said Kelly Michael Stewart, BITS Festival Director and Founder. “We can’t wait to share these exceptional films and experience them together in-person again. And with the virtual edition of the festival showcasing an entirely different selection of films on Super Channel Fuse this weekend, it’s the best of both worlds!”

BITS has two features proudly making their World Premieres at the Royal: The Chamber of Terror from writer/director Michael Pereira, featuring a who’s who of Blood in the Snow alumni including Ry Barrett (The Demolisher, The Hoard), Jessica Vano (Art of Obsession) and Robert Nolan (Mourning Has Broken), and Woodland Grey, directed by Adam Reider from a screenplay co-written with Jesse Toufexis and starring Jenny Raven, Ryan Blakely and Art Hindle.

Also making their Canadian premieres at BITS are the thrillers Peppergrass, from directors Steven Garbas and Chantelle Han (Black Summer), as well as the festival’s closing night film, The Family directed by Dan Slater (Ashes).

Below is the lineup of all the thrills and chills headed to the BITS festival for its six-night run at the Royal Cinema. Visit www.bloodinthesnow.ca for full details.

Joel, a caustic 1980’s film critic for a national horror magazine, finds himself unwittingly trapped in a self-help group for serial killers. With no other choice, Joel attempts to blend in with his homicidal surroundings or risk becoming the next victim.

6:45pm – Funny Frights (87 mins) – A collection of premieres of Canadian genre shorts that look on the “lighter” side of horror.

During a pandemic, a pregnant restaurateur tries to rob a priceless truffle from a reclusive veteran.

6:45pm – Dark Visions (100 mins) – A collection of the darkest, scariest, moodiest and the most intense Canadian short films playing this year.

Nash Caruthers is on a deadly collision course with the people that tore his world apart…along with something unexpected. Something far more sinister.

6:45 pm – Emerging Screams – A collection of short films from brilliant first-time directors and the most promising student filmmakers in Canadian horror.

A mystical horror-thriller where reincarnation, demons and sorceresses intertwine to tell the story of a spiritual search gone wrong. A psychology student delves into her sister’s psychosis, exposing herself to an ancient predator who hunts souls.

A man living alone in the deep woods finds Emily, a hiker, unconscious and laying on the forest floor. He brings her back to his home and helps her get back to health so she can leave the forest and get home. After a few tense days coexisting, Emily makes a discovery. She finds a crudely built shed behind the man’s home. When she opens it, she unleashes something truly haunting. As Emily and the man come to terms with what has been released, they also attempt to find a way out of the forest which isn’t exactly what it seems.

On an isolated farm in what appears to be the 1800s, a family is led by their tyrannical father who preaches fire and brimstone and their devout mother who preaches obedience. They live in fear of a higher power and an existential threat living beyond their farm. Promising eternal salvation and protection against these outside forces, the father demands blind faith and back-breaking labor.

Passes and tickets are on sale now at www.bloodinthesnow.ca

Horror fans across the country are reminded that the virtual edition of the BITS festival runs over Halloween weekend on Super Channel Fuse with a collection of films not screened at the Royal Cinema. The Blood in the Snow Film Festival presented by Super Channel will showcase five harrowing horror features and a variety of hair-raising shorts programs across three nights of terror-ific programming (Oct 29 – 31). The virtual film festival experience will include pre-recorded film intros and Q&A’s with filmmakers. 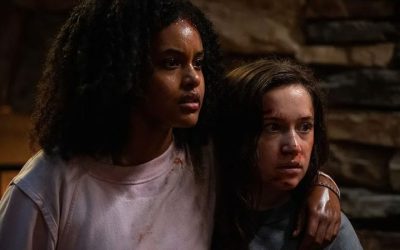