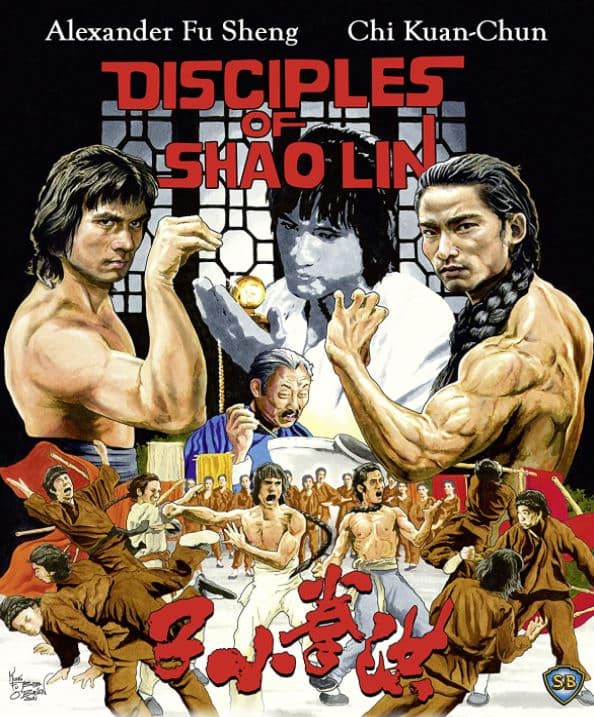 After a serious case of credits with training montage we get down to the meat n’ potatoes of Disciples of Shaolin; namely the arrival of Shaolin-style kung-fu bumpkin Kuan (Alexander Fu Sheng, who tragically died at age 28 from injuries sustained in a car accident in 1983) who arrives in town in the hopes of obtaining work at the local textile mill via his friend/fellow Shaolin kung-fu disciple Huang (Chi Kuan-Chun).

Spoiler: Kuan obtains a job at the textile mill.

And, what a job it is; fuckin’ around with looms and blatantly showing off his marital arts prowess exactly as Huang asked him not to do. Good thing too, as it’s just this kind of ass-kickin’ showboating that quickly results in our hero becoming the right hand man to the boss of the factory himself!

Now, why would the boss need someone with those skills so damn bad in an industry based on thread count and long-lasting fabric durability? Because there is a rival mill in town who uses copious amounts if kung-fu to kick the asses of the workers from Kuan’s 9 to 5… as is so often the case!

As Kuan’s success grows, so does his ego… will that be his undoing?

While nowhere near filled with wall-to-wall action, director/co-writer Cheh Chang nevertheless delivers an entertaining flick with Disciples of Shaolin.

A large part of that interest rests on the shoulders of leading man Fu Sheng who is more than capable of delivering both the kicks and chops one would expect from the material at hand, but also displays a great grasp of comedic timing and child-like wonder that makes Kuan a fun protagonist to follow, and his getting carried away by the littlest amount of success is both understandable, and at times heartbreaking.

As mentioned while the fights are sparse until the third act, but what is there is energetic and kinetic thanks to the skills of the cast and the work of stunt coordinator Chia-Liang Liu (who went on to direct Fu Sheng in his final film The Eight Diagram Pole Fighter, released posthumously in 1984) … and the action at hand can go from whimsical to brutal in the blink of an eye!

Adding to the fun, you can play “Guess what Italian movie the score is lifted from now” if that’s your bag.

Speaking of “addition”, the fine folks at 88 Films have added in some solid bonus material on this Blu-ray release including two audio commentaries; one an ultra-informative journey through the film’s themes and the careers of those involved courtesy of film journalist/author Samm Deighan, and the other an energetic, scholarly yet coming from the fans perspective chat with Asian cinema experts Mike Leeder and Arne Venema, who seem to be having the time of their lives.

Following those we get an interview with actor (and a director in his own right) Jamie Luk, and the film’s theatrical trailer… not to mention the sharp-as-fuck HD remaster of the film (from 35mm negatives, and the fact that all of the above comes with a slipcover and double sided poster featuring artwork from “Kung Fu Bob” O’Brien, and a rad collector’s booklet featuring all manner of writing and interviews detailing the film’s production!

To sum it all up: If you love a good underdog gone astray yarn where people get their asses beat, then Disciples of Shaolin has your amazingly specific cinema tastes covered… but the film is also a pretty solid entry in the Shaw Bros. catalog, and is a great deal of fun thanks to the performance of Alexander Fu Sheng.

← Prev: 'Those Who Walk Away' Trailer Explores A Haunted House Inhabited By A Demon Next: Movie Review: “Speak No Evil” (Sundance Film Festival) →