In the first trailer for Hulu‘s new true series “Candy,” Jessica Biel has transformed into an 80’s housewife turned ax murderer, Candy Montgomery, who seemed like the perfect wife and mother, until she snapped.

The next image shows Biel as Candy sitting with friend Betty Gore, played by Melanie Lynskey, who would eventually fall victim to Candy, being hit 41 times with an ax. 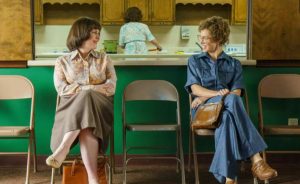 The series is an adaptation of Jim Atkinson and John Bloom‘s nonfiction book, Evidence of Love: A True Story of Passion and Death in the Suburbs, which chronicles Candy’s life, affair, and crimes.

According to Hulu, “Candy Montgomery is a 1980s housewife and mother who did everything right — good husband, two kids, nice house, even the careful planning and execution of transgressions — but when the pressure of conformity builds within her, her actions scream for just a bit of freedom. With deadly results.”

Pablo Schreiber and Timothy Simons also star in the upcoming limited series that premieres on Hulu on May 9, 2022, in a special five-night event.

← Prev: Movie Review: The Long Night Is A Surprising Horror That Pits Scout Taylor-Compton Against A Cult Next: The Expedition Bigfoot Team Heads To Wondercon For The First Time →