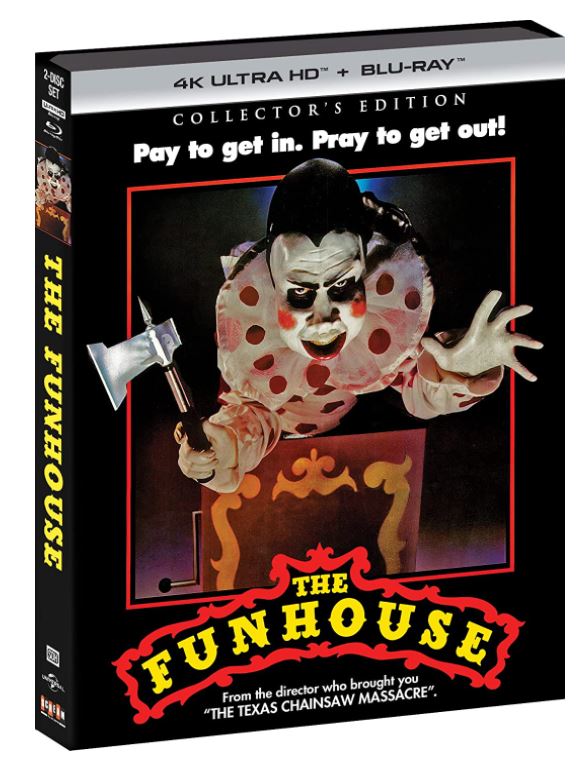 After some truly creepy shit with a young kid waltzing right into the middle of his naked sisters shower… you know the kind in these flicks, where our heroine absently soaps up her breasts more than anyone in the history of ever has done… and pretends to kill her, slasher style along with stern warning from her father (not shower based) to stay away from the local carnival/recent murder site (I bet those words have been strung together more times than we can imagine), Amy Harper (Elizabeth Berridge) and her friends head directly to the local carnival/recent murder site.

After much fairground fuckery, including a sideshow featuring deformed animals and fetuses (fun for the whole family!), a magic show featuring Marco the Magnificent (the Phantom of the Paradise himself, William Finley), and a disastrous visit to the resident mystic, Madame Zena (Sylvia Miles), Amy and the gang decide to stick around after hours and spend the night in the eponymous funhouse.

Well as fate would have it, ol’ Frankie is in truth the mutant offspring of the carnival’s barker (Kevin Conway) and it isn’t long before that rambunctious ruffian is chasing our protagonists left and right, just achin’ to lay some mayhem upon them at the behest of his putrid papa!

While dealing with some of the same themes as his previous work, 1974’s The Texas Chain Saw Massacre (a dysfunctional, murderous family was kind of his bag there for a bit), director Tobe Hooper’s (working from  a screenplay courtesy of Lawrence J. Block) The Funhouse leans closer to his 1976 feature Eaten Alive in it’s overall aesthetic with stagey sets, sweat drenched characters, and vivid color filling every frame!

Also on point is the film’s pacing with a fantastic sense of growing doom that boils over into a fantastic stalk n’ slay finale which is sold beautifully by the capable Berridge who runs the gamut from the all-natural girl next door to shrieking yet resourceful heroine quite well.

And speaking of Amy’s nemesis, the monster (Wayne Doba) is an absolute batshit maniac of the highest order; a split-faced albino with crimson eyes and razor sharp fangs who communicates by screeching it’s ass off designed by none other than the legendary Rick Baker! It’s a memorable beast and is definitely a winner through and through… which is pretty fuckin’ important in a creature feature if I do say so myself… and I just did!

Working from a 4K scan of the film’s negative, this presentation features plenty of eye-popping, cranked-up color, but the image is evened out by rich blacks and a minimum of grain… so it looks sharp and you can see every bit of that flea-bitten midway and it’s degenerate denizens in stunning detail!

As for bonus features on this 4k UHD/Blu-ray combo pack from Scream Factory, things kick off with an amiable archival chat with Hooper (moderated by filmmaker Tim Sullivan) that takes us through the film’s production, as well as the film’s theatrical trailer… at least on disc one that is…

Disc two contains the film on Blu-ray with the above commentary and trailer included, but this is where the brunt of extra material is to be found!

Following a collection of trailers and radio spots we get interviews with actors Conway, executive producer Mark L. Lester, composer John Beal, an archival audio chat with Finley, actors Largo Woodruff, Miles Chapin, Doba, and special effects wiz Craig Reardon, a collection of deleted scenes added back to the film for it’s television broadcast to replace all that boobs n’ blood goodness found in the original cut, and a commercial for the film’s novelization written by none other than Dean Koontz (Owen West my arcane ass).

Full of sleazy carnies, various bodily fluids, a memorable mutant, and a game cast; Tobe Hooper’s The Funhouse is an irresistible classic slasher by way of the sideshow and shouldn’t be missed!

*The Blu-ray Disc was utilized for this review