The Soska Sisters Are Back With ‘Unseen’ Inspired By ‘BlindSide’ Game 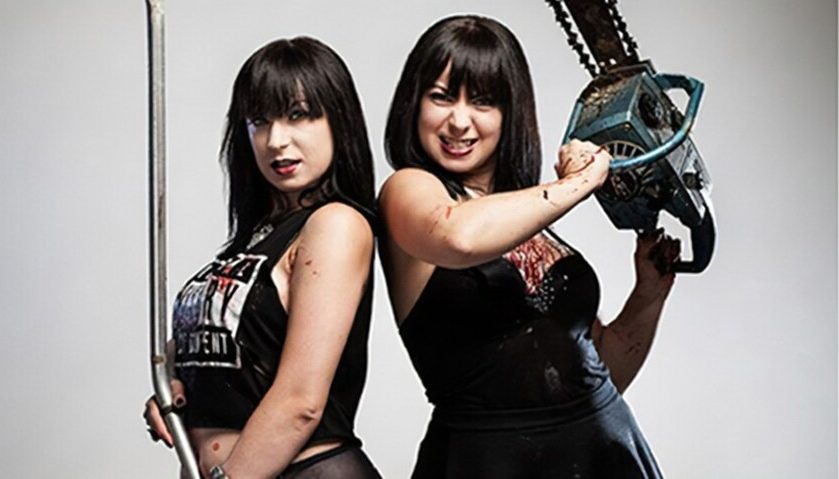 Kelli Marchman McNeely is the owner of HorrorFuel.com. She is an Executive Producer of "13 Slays Till Christmas" which is out on Digital and DVD and now streaming on Tubi. She has several other films in the works. Kelli is an animal lover and a true horror addict since the age of 9 when she saw Friday the 13th. Email: [email protected]
Film Mode Entertainment, The Soska Sisters, and Radar Pictures are thrilled to announce UNSEEN, the latest thriller/horror from the infamous, world-renown “Twisted Twins” aka Jen and Sylvia Soska, whose hit films include Vendetta, Rabid, American Mary, and ABC’s of Death. The film is written and directed by Jen and Sylvia Soska and is currently casting. The film is produced by global powerhouse producer Ted Fieldwhose impressive credits include a slew of global box office hits like Texas Chainsaw Massacre, Amityville Horror, and the Jumanji franchise.
Film Mode Entertainment (FME) is teaming up with the sisters again, after a successful run with the hit 2019 reimagined David Cronenberg horror film, Rabid.  UNSEEN is inspired by one of the world’s most innovative video games, BlindSide. FME has just boarded the project as a worldwide sales agent for global rights to the film.
UNSEEN is a psychological sci-fi thriller that takes place in the 1970s about a Boston couple who wakes up blind. They quickly discover that everyone around them has also been stricken blind and what’s worse is there is something else in the darkness with them. Their only hope is Ada, a blind woman who volunteered the day before for an experiment to allow her to see again in her dreams. They receive a panicked call — now she can see! She is at the university up the street, and they must find their way to her if they hope to survive this nightmare.
Film Mode Entertainment will be premiering a presentation reel at AFM, featuring never before seen interviews of the producers and filmmakers sharing their vision for the film along with a candid insight into their inspiration and influences on Monday, October 31, 2022 at 5pm at Tunnel Post in Santa Monica, and will begin pre-sales at the market.
The script for UNSEEN was inspired by the global sensation video game BlindSide, a terrifying audio-only thrilling adventure designed by tech gurus Aaron Rasmussen and Michael T. Astolfi set in a fully-immersive 3D world the gamer will never see, with over 1000 sound effects and pieces of dialogue, and gyroscope-enabled virtual reality. Inspired by Rasmussen’s experience of temporarily living with blindness caused by an accidental explosion, the game offers an identical gameplay experience to both sighted and visually-impaired users.
BlindSide quickly became well-known for its unique contribution to the audio-only game genre. It garnered nearly 50,000 downloads after its release, was honored with the Games for Change Most Innovative Award, and was featured on MSNBC, in The New Yorker, Wired, and Gizmodo to name just a few. The game and its creators garnered further accolades from museum exhibitions to multiple awards, and the inner workings and concept of the technology have been utilized by researchers and explorers, and now as the inspiration for a major feature film.
Producers for UNSEEN are Ted Field, Maria Frisk, Michael Napoliello, Alex Power of Radar Pictures, and Twisted Twins Productions. Martin Katz and Karen Wookey of Prospero Pictures are also producing. Clay Epstein of Film Mode Entertainment is Executive Producing.
UNSEEN is currently in development and moving into the pre-production phase with additional news on casting and more to come.
Here’s a look at the game trailer that the film is inspired by.

“Audiences have already shown an enormous appetite for sensory deprivation thrillers; and UNSEEN is going to raise the bar even higher in this high concept and suspenseful story.  With the phenomenal talent of the Soska Sisters at the helm and Ted Field guiding the team forward, we know have a hit on our hands.  Not only are we thrilled and honored to be working with Ted, Sylvia and Jen, we just can’t wait for audiences to embrace this thillride as much as we have.” Said Clay Epstein, President of Film Mode Entertainment.

“Unseen is an experiential horror film that places the audience in Kafkaesque dilemma where they wake up in a world of unknown terrors they can only hear since their sight is gone.” Said Radar’s CEO, Ted Field.

“As lifelong gamers, we have always wanted to have the opportunity to adapt a video game into a feature film experience. Breaking new ground by exploring a thriller narrative within science fiction has given us the ability to elevate our story like never before. We are excited for fans to see something completely new from us.” Said The Soska Sisters, Jen and Sylvia.

UNSEEN is the second recently announced movie from the Soskas with the S&M horror On the Edge announced last week.