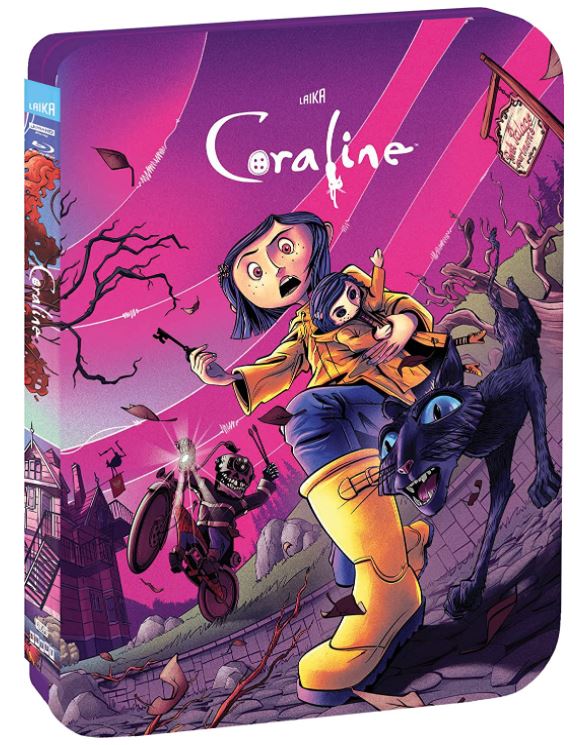 Our dear fiends over at Shout! Factory have unleashed a demonic duo of frightful family features, and I’m about to lay my eerie eyeballs on both monstrous movies!

First up comes Coraline, an impressive stop-motion adaptation from Henry Selick (The Nightmare Before Christmas) based on the yarn from Sandman’s Neil Gaiman!

Coraline Jones has it rough; she’s the new kid in town, and her parents do nothing but work their asses off ‘round the clock.

While existing in her solitude, our heroine makes the acquaintance of her parent’s landlady’s grandson; one, Wyborne “Wybie” Lovat (not to mention a black cat that always makes the scene), and before long her new pal hands Coraline a ragdoll his grandmother owns… and that thing looks just like our protagonist!

Now get this, that doll is soon up and about, and leads Caroline to a secret door in the apartment that opens upon a parallel nightmare universe populated by button-eyed, saccharine doppelgangers of her parents… not to mention other sinister surprises!

Will Coraline find the reserve to stop the evil from the other dimension, and learn to lead a fulfilled childhood in her new rural environs?

Comprised of a dark sense of the fantastic and brought to life in jaw-droppingly gorgeous and expressionistic stop-motion animation, Coraline is the type of children’s movie we don’t get much these days; bizarre, filled with fun adventure, and possessed of a stead-fast refusal to talk down to it’s audience, no matter how chilling the subject matter becomes.

Adding to this is a fantastic voice cast (whose ranks include Dakota Fanning as the titular character, and the legendary Keith David (John Carpenter’s The Thing and They Live, HBO’s animated Spawn series) as that aforementioned cat), and meticulously detailed world building that makes both the “real” settings and the fantasy that lay beyond believable… no small feat considering the visual madness that parades across the screen!

While the feature is something special on its own, there are a veritable treasure chest of special features included on this 4K release!

Kicking things off is an archival audio commentary with Henry Selick and composer Bruno Coulais, followed by new featurettes exploring the film’s characters (and the puppets used to bring them to “life”).

Next, we get the complete storyboards used to plan the picture (this runs 94 minutes and is a fascinating comparison between conception and finished film), and three behind-the-scenes featurettes.

Last comes a collection of deleted scenes, still galleries, and the film’s trailer. 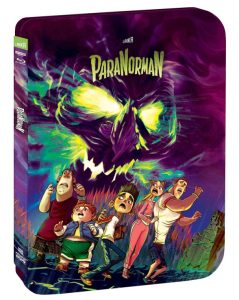 Not to be undone, Shout! Factory has also released a new 4K version of 2012’s ParaNorman, also created by the animation studio responsible for Coraline, LAIKA.

New England middle-schooler Norman Babcock (Kodi Smit-McPhee) is treated like absolute shit by everyone in his life… and I do mean everyone.

This is only exasperated by the fact that Norman claims he can talk to his dead grandmother… well he not only claims he can do it, but he actually can too!

Well, things begin looking up for Norman when he meets Neil (Tucker Albrizzi), an energetic optimist that counters our hero perfectly. This is rather fortuitous as Norman will need all the friends he can get when supernatural shenanigans begin to ensue around the 300th anniversary of the town’s execution of a witch… which leads to an ancient curse bringing the dead to life to exact revenge!

ParaNorman is every bit as charming and creepy as it’s predecessor Coraline, but it has a lot on its mind as well.
For sure we get an arcane avalanche of ghoulish goings-on filed to the beastly brim with zombies, ghosts, and witches; this is like an injection of pure Halloween straight into your putrid peepers… but we also get strong messages of the real-life terrors of bullying, as well as plenty of laughs which manage to take a bit of the edge of from the horrors at hand.

It almost goes without saying that the stop-motion animation utilized to bring this flick to vivid life is nothin’ short of tight and outta sight… almost goes, because I’m sayin’ that shit right here and now! Laika have taken the 3 years between Coraline and ParaNorman and increased their already sky-high animation standards, and the result is a vibrant, color saturated Samhain fever dream!

As before, this release is loaded with plenty of bonus material to give a wicked whirl!

First up is an audio commentary from writer/co-director Chris Butler and co-director Sam Fell, followed by another round of character and puppet explorations.

Following that comes the same fascinating feature length storyboards, and a host of behind-the-scenes featurettes… as well as still galleries, and the film’s trailer.

While not related by story content, Coraline and ParaNorman are thematically linked, that’s for damn sure… plus they share that whole “awesome as all fuck stop-motion animation” … seriously though, if you dig on arcane animation and weird-o underdogs (like us!) gettin’ their day, these are eerie essentials for your creepy collection!

← Prev: Lionsgate Releasing 'The Dentist Collection' On Blu-ray For The First Time Next: Horror-Comedy 'The Blackening' Slashes Its Way Into Theaters Juneteenth →