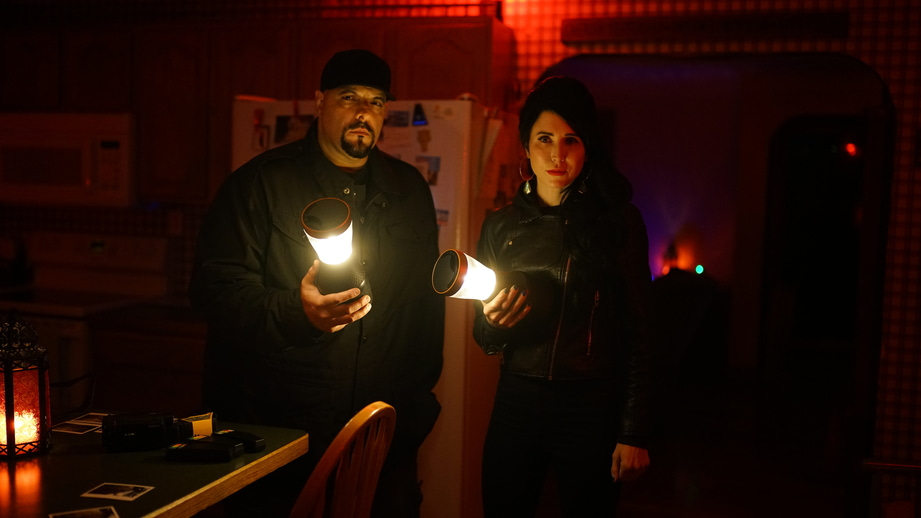 Amy Bruni, Adam Berry, and Chip Coffey visit a former poorhouse in Waynesburg, Pennsylvania, where rumors of torture tarnish an already dreadful history. The facility is now a cultural center, but intense paranormal activity terrifies employees and guests. Can the team rectify the horrors of the past and bring peace to this haunted place?

Amy Bruni, Adam Berry, and Chip Coffey are called to the haunted town of Palmyra, New York, to investigate aggressive paranormal activity at a museum. Has a recent fire triggered a family of spirits? Or is the ghost of a vicious doctor behind the haunting?

Paranormal investigator Steve Shippy broke the case seven years ago after more than 40 years of silence. He found a living nightmare that rivals horror films like “Amityville Horror” and “Poltergeist,” but this house of hell is 100% real and just as terrifying. The story takes place in a farmhouse in the tiny village of Merrill, Michigan. From the summer of 1974 to the spring of 1975, the Pomeraning family endured relentless, bizarre, and violent paranormal phenomena. Knocking, explosions, disembodied voices, and even spontaneous combustion ripped apart the home and the family living inside it. With dozens of hours of real-time audio recordings, hundreds of police reports, and dozens of eyewitnesses, this case is arguably the most well-documented paranormal case in history. Yet to this day, no one knows why an unseen, evil force ravaged this family. Was it a poltergeist? Demonic possession? Witchcraft? Now Shippy and world-renowned psychic medium Cindy Kaza, armed with new evidence, will finally uncover the source of the evil that terrorized the Michigan Hell House.

A father and son unlock a secret room full of deadly surprises. An urban explorer spends the night in a house of horrors. And two best friends dig up more than they bargained for when they discover a witch’s ladder containing a sinister spell.

Something dark and sinister lurks in Kevin’s home that drags him out of bed and leaves him with painful scratches. In an emotional and intense investigation, the team uncovers a demon entity that wants his soul.

Paranormal investigators Zak Bagans, Aaron Goodwin, Billy Tolley, and Jay Wasley respond to urgent calls for help from desperate homeowners whose lives have been thrust into turmoil from unexplained activity inside their private residences. After hearing each family’s haunted account and reviewing bizarre evidence captured in their home, Bagans sends the crew on a personal house call to meet the family and get to the bottom of their paranormal emergency. Armed with their equipment, the team conducts a thorough investigation to see what evidence they can capture. At the same time, Bagans oversees the activity from his headquarters, providing insight and applying experimental tactics from his unique vantage point. After analyzing the evidence, Bagans shares the findings in a one-on-one meeting with each homeowner, offering them much-needed advice and resolution. [Hour-long episodes]

Zak Bagans sends the team to a Pennsylvania home to investigate claims that dark aggression has overtaken a large family. The crew is stunned to discover the haunting emanates from a deceased father’s remains.

The creepy collection of haunted artifacts housed inside Zak Bagans’ Haunted Museum is getting the spotlight in THE HAUNTED MUSEUM, a new horror film anthology series produced in collaboration with filmmaker Eli Roth. The series presents frightening and hellish tales inspired by the mysterious relics on display in Zak Bagans’ Las Vegas museum. Bagans, a devoted collector of the macabre, is opening his museum vaults and sharing the secrets and stories behind a curated selection of his most prized haunted items through scripted shorts produced by Roth and his accredited team and with featured commentary from Bagans. [Hour-long episodes]

A single mother must fight to defend her family from a terrifying demon that has invaded her home and now threatens to possess her three children.

A skeptical college professor must re-examine his beliefs and face his greatest fears as he struggles to unravel the mystery surrounding one of the world’s most dangerous paranormal artifacts.

The Ghost Brothers – Dalen Spratt, Juwan Mass, and Marcus Harvey – flip the switch on paranormal lore by shining a light on its darkest secrets. In the second season of GHOST BROTHERS: LIGHTS OUT, the hype men of the haunted investigate iconic paranormal hot spots to find out if the legends are true and if these places are still plagued by the horror of the events that occurred there. They are ready to expose the haunted holdouts hanging around these locations using unconventional experiments. [Hour-long episodes]

Dalen Spratt, Juwan Mass, and Marcus Harvey check into the infamous Waverly Hills Sanatorium to confront yet another dark chapter in the building’s horrific history. The guys put themselves in a precarious situation when they use authentic body bags to provoke the spirits.

In HAUNTED SCOTLAND, renowned American medium Chris Fleming and Scotland’s Gail Porter lead an expert paranormal team to investigate the chilling crimes, supernatural sightings, and terrifying stories across one of the most haunted countries on earth: Scotland. With exclusive access to places where a film crew has never been allowed, they will try to make contact with the spirits to explain the paranormal mysteries that have haunted Scotland’s most iconic landmarks for centuries. [Hour-long episodes]

Nearly 200 years ago, the Verdant Works was one of Scotland’s deadliest factories. And reports say its exploited workers never left. The team is put through the mill as spectral children give them the run around in this Victorian factory.

← Prev: 'Cocaine Bear' Is Unleashed In New Trailer! Next: New Trailer For Twisted Thriller 'Daughter' Makes A Kidnap Victim Part Of The Family →