Movie Review: Smoke and Mirrors: The Story of Tom Savini (2015) 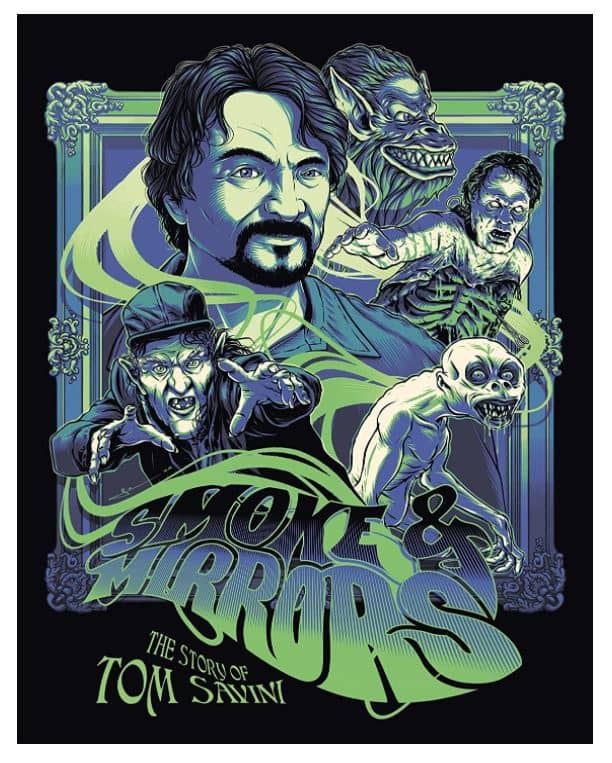 Look, if you cats n’ creeps don’t recognize the name Tom Savini, then you are most likely readin’ the wrong column… that being said, if you’ve seen the likes of Dawn of the Dead, Creepshow, and the original recipe Friday the 13th (to name a few) you sure as shit know his handy work in the field of special effects!

Speaking of which; the flick under the monstrous microscope today is all about Savini! Let’s focus our putrid peepers on Smoke and Mirrors: The Story of Tom Savini…

Filmmaker Jason Baker, himself a professional special effects artist, begins his documentary with a quick montage of the maestro’s work before getting down to the first 1/3rd of the picture’s main concern; exploring Savini’s personal life, from his formative years in Pittsburgh, some of which were spent working a travelling spook-show, to his service in the Vietnam War, in an effort to learn what led him to become one of the greatest special effects artists to ever live.

To that end we get stories both related and unrelated to that ghoulish goal, before we jump into his work itself (at least up to around 2015, the film’s production date)  with the main focus on the power players of his filmography (though mention is made of lesser known titles)… so if you are familiar with the man you have probably heard most of the anecdotes contained within.

We also get a score of celebrities (including the likes of Alice Cooper, George A. Romero, and Corey Feldman) chiming in on Savini, as well as an examination of his first directorial effort; 1990’s remake of Romero’s 1968 zombie classic, Night of the Living Dead… an experience which Savini was ultimately disappointed by.

A focus is also placed on Savini’s work as an actor in Robert Rodriguez’s 1996 vampire masterpiece From Dusk till Dawn, where he played the unforgettable gun-crotched madman, Sex Machine.

Of special note to fans are the special features contained on this Blu-ray release from Wild Eye which boast some deep dives into Savini’s archives, as well as a commentary from the director and Savini himself!

At the end of the day, hardcore fans probably won’t learn anything new about Savini’s work from Smoke and Mirrors: The Story of Tom Savini, but the glimpses of his personal life make it an interesting and entertaining watch!