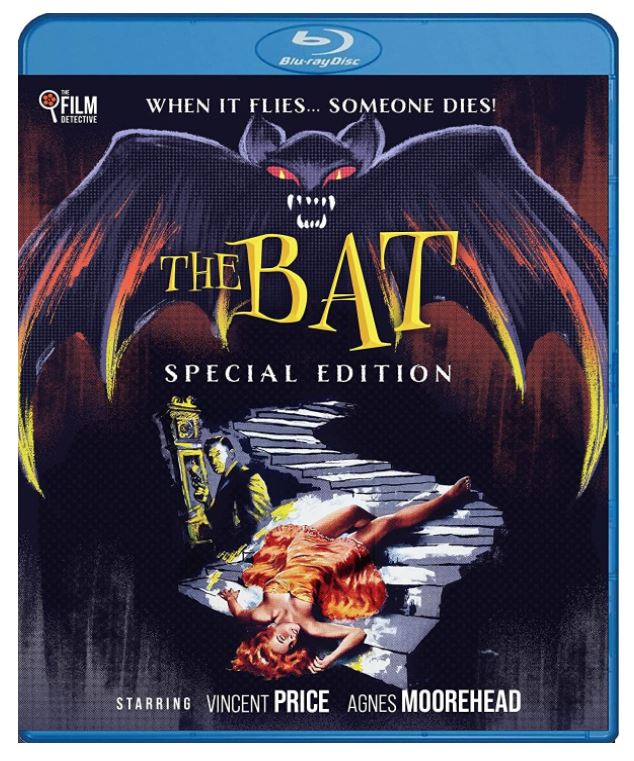 After one hell of a swinging opening theme, writer/director Crane Wilbur’s The Bat gets underway…

Mystery author Cornelia Van Gorder (Agnes Moorehead, known best these days for her regular appearances on ’60s sitcom Bewitched) along with her assistant Lizzie (Lenita Lane), rents The Oaks; a Gothic mansion/summer home owned by bank prez John Fleming (Harvey Stephens)… who just so happens to have embezzled a million dollars from said bank, and is planning on faking his death with his doctor, Malcolm Wells (Vincent Price) who quickly pulls a double-cross in order to grab those sweet-ass greenbacks!

Meanwhile the are has been plagued by woman-killer The Bat; a mysterious shadow-figure who soon makes the scene at The Oaks, and releases a bat which puts the bite on Lizzie which causes a fear of “the rabies” infection… and who do you think they call in to take a look-see? None other than Wicked Wells!

Will the wily Wells get his hands on the loot, or will the cagey Van Gorder be his match… and just who is The Bat?

The Bat (based on a play from Mary Roberts Rinehart and Avery Hopwood) is a peppy lil’ “old dark house” thriller that cooks along at a good clip, helped in no small part by the chemistry and snappy interplay from Moorehead and Lane, who’s fast-paced witty dialog sets the pace for most of the proceedings.

As things roll quickly onward we are also treated to some decent suspense, tons of shadow-drenched atmosphere, and a sharp looking villain (The eponymous Bat wears a black suit and fedora, his face obscured completely by an ebony-hued mask, and his gloves tipped with sharp talons), not to mention the presence of the ever-classy Price… it all adds up to a very fun, and often funny, Gothic whodunit (complete with thunderstorms and secret passages)!

For trivia’s sake, look for The Little Rascals Darla (Darla Hood) in a supporting role as an adult.

While the main event is definitely a winner, the transfer utilized by The Film Detective on this Blu-ray release is gorgeous, and features beautiful chiaroscuro images with rich blacks that make the black and white photography really sing in crystal clarity.

Enhancing the experience are a few choice bonus features which include a look at the fascinating life and career of Wilbur, an informative audio commentary by Professor and Film Scholar, Jason A. Ney (who also provides an essay for the included booklet), and a collection of nine radio episodes featuring Price.

A classic Gothic-style mystery filled with an excellent cast and properly macabre aesthetic, The Bat is a wicked winner that deserves a place in you creepy classics collection!