Back From The Ashes!: Game Review Of ‘Shadowgate’(Remake)

Gather around and I’ll tell you the tale of a legendary game that rose from the graveyard of game lore to make a triumphant return! Gamers worth their weight in hours of gameplay tell tales of an old adventure point-and-click game on PC in 1987 where you venture into a castle to vanquish an old warlock after traversing through the maze of a castle. This game is called Shadowgate. It spawned two sequels, Beyond Shadowgate that came out in 1987 too, and Shadowgate 64: Trials of the Four Towers that came out in 1999 for the Nintendo 64. 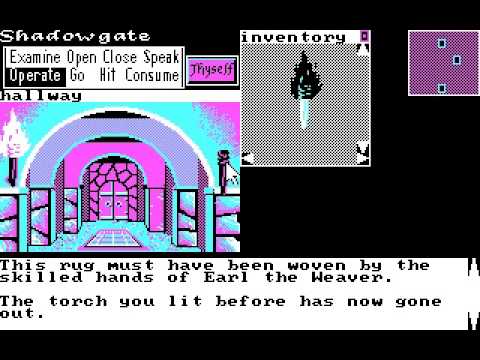 Now in the present time, Zojoi and Abstraction brought the legendary game back with a complete and epic update, and they were kind enough to allow me to try it out. I present to you fellow adventurers, the remake of Shadowgate.

In this first-person point-and-click game, you play as a young warrior who was summoned by the wizard Lakmir who is the last of the twelve guardian wizards who can right the wrong done by the evil warlock that he and the others imprisoned but has now escaped. You must now travel through the “living castle” to vanquish this ancient threat, with the help of a talking skull named Yorick.

One of the coolest things about this remake is that it allows you to have the option to have the text be in the retro style of the old game, even allowing you the option of having the original NES chip tunes done by Hiroyuki Masuno!

The controls are pretty basic if you’re familiar with point-and-click games but there’s a twist to it as this is on console but don’t worry, instructions are always just a button press away.

The best way I can describe the graphics is, “living art”. The artwork is amazing and with animation, it keeps the atmosphere alive, literally!

The soundtrack is epic and fits the narrative BUT it can be repetitive after while also another thing that gets old quick is the constant back and forth between rooms and puzzles but then again, that’s what videogames were like back then.

Speaking of puzzles, some are tricky, some are not, but this leads to my favorite character in the game, Yorick! Yorick is a talking skull who acts as your backseat gamer (someone who tells you what to do as you play the game), though his dialogue is only through text, he says some funny things as he clearly is easily annoyed by you.

The written dialogue gives the feel that you’re reading a fantasy novel, or having the narrative given to you by a dungeon master. There is spoken parts in cut scenes but be prepared to do a lot of reading.

I never really got into these type of games but slowly I’m starting to become more and more fascinated with the genre and Shadowgate is one of those games that newcomers to the fantasy exploring games should look into. The story is the stuff of any good story in the genre, the imagery is Louvre worthy, the soundtrack is spot on, and most importantly the dedication to not straining too far off from the original gives hope that there’s such thing as a good remake. It should be no surprise that out of my scale of 5 stars, it’s a fire breathing 5!

← Prev: Producer Teases That 'The Nun 2' Is Already In The Works Next: Feel The Blood And Gore Of Hellboy With New 4XD Experience →