Dyeing For Honor, Game Review Of ‘Story Of A Gladiator’

Indie game developer Brain Seal Entertainment gave me the opportunity to prove myself to the gods by entering the fighting arenas of ancient Rome to show myself worthy! Or at least virtually with the help of their game Story of a Gladiator. This 2D beat ‘em up tells the story of a man of humble beginnings fighting his way to the top for glory as a gladiator with the hopes of competing at the Coliseum.

Players can pick three different characters at the beginning of the game where each individual has their own perks, a Greek, a Carthaginian (North African), or Egyptian. There are three areas that you fight in, Capua in Greece, Neapolis in Carthage, and the Coliseum in the heart of the Roman Empire. In each arena has levels that are full of waves of enemies you must defeat in order to advance as well as earn coins and XP to build up your rankings and buy better gear.

Now onto Story of a Gladiator itself. This game is a Trojan horse, it comes across as very simple and easy but you learn quickly that these gladiators are playing for keeps and are not forgiving! The controls are very simple which is nice for the pace of this game, it keeps it simple and allows you to just enjoy hacking and slashing.

The art of the game is perfect and the animations are smooth and fitting for it. The voice acting in the cutscenes is top tier in my opinion. The soundtrack is pretty decent too but my only complaint about it is that it’s too loud at first (but through the options I lowered it quite a bit).

Overall the Story of a Gladiator is pretty fun to play but after a while, it becomes a bit repetitive. Personally I think because of how simple the controls are for it is actually a good thing as I can see this being one of those games where you might get bored of it but you can jump back into it at any time when you have a couple of hours to spare and you just want a mindless game to play. On my scale of five stars, it squeaked in at a 4 because of how fun it is.

Story of a Gladiator is out now for the Nintendo Switch, PlayStation 4, STEAM, and Xbox One

← Prev: Things Get Violent In The 'Fantasy Island' International Trailer Next: Discover Robert Eggers' 'The Lighthouse' This December → 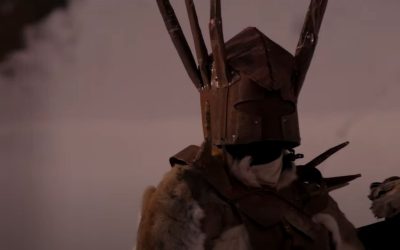 This July the thriller Endangered reminds you not trust strangers. From director Drew Walkup and starring Lizzie...