Writer/director Paddy Murphy’s The Perished is a horror film that explores the religious and social controversies in his native Ireland regarding abortion — which was illegal there until quite recently — and the stigma that it carries, but the film is easily relatable to viewers outside that country who bring their own differing viewpoints to it. It delivers as a body horror film and a monster movie with a decidedly creepy creature.

Sarah (Courtney McKeon) is a young woman who accidentally gets pregnant by her boyfriend Shane (Fiach Kunz). During the same conversation when she planned to tell him about it, he dumps her before she can break the news. Not wanting a child at this point in her life, she travels alone to England to have an abortion. Her strictly religious mother Elaine (Noelle Clarke) finds out and kicks her out of the house in an uproar for bringing shame to their family as Sarah’s meek father Richard (Conor Lambert) stands by quietly. Sarah goes with her gay friend Davet (Paul Fitzgerald) to his family vacation home in the countryside. The house is avoided by the locals because it has a history, and is built on a mass grave of unwanted babies. As things start to go bump in the day and night, Sarah finds herself haunted and hunted by something mysterious and deadly.

The Perished is full of stirring drama, as Sarah makes choices that she believes are best for her while her mother and ex-boyfriend make their selfish thoughts known all too clearly. Though hints of scare fare are in place earlier on in the film, the third act is when the creep factor and body count both rise. McKeon gives an outstanding performance as the strong-willed yet vulnerable Sarah, showing fine effort in both the dramatic and chilling scenes. She and Fitzgerald play off each other well in moments both light and heavy, and the rest of the cast members all give solid turns, too.

Murphy shows a deft hand at building both dramatic stakes and suspense. He crafts a creepy atmosphere that is all the more startling once the monster and its purpose are revealed. The creature design is impressive. Sound design also plays a big part in setting the eerie tone of The Perished, with the wailing of babies being loud to some characters and nonexistent to others.

The Perished does a fine job of blending social drama with outright horror. The film, from The Horror Collective, is now available to order on iTunes. 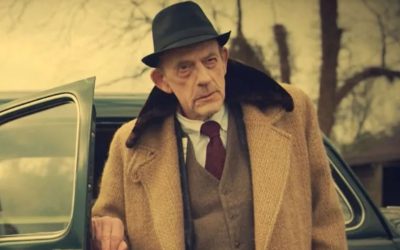 Last month we reported that a horror film based on the Spirit of Halloween stores is in the works, starring...