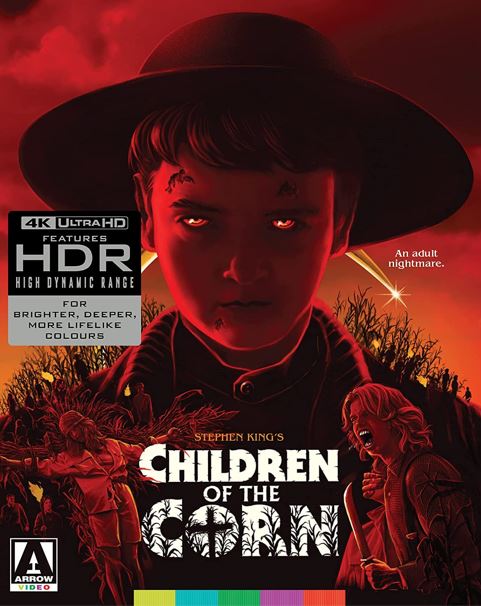 Along the way they run over a kid in Nebraska as one does, and find themselves lost in the seemingly abandoned town of Gatlin. Well, as fate, and Stephen King (yup, this is based on a short story by the monstrous maestro himself from 1977) would have it, the town’s children have murdered each and every adult in town, and are really into cornfield sacrifices to an evil deity known as “He Who Walks Behind the Rows”.

Chief among that corn-based antichrist’s arcane acolytes are the Preacher-man… err, child Issac (John Franklin) and his enforcer Malachi (Courtney Gains, he of The ‘Burbs fame), and both are hell-bent on making Burt and Vicky the latest offerings to their dark god, but unexpected help may turn the tide for our harried heroes!

A staple on HBO during my misspent youth, Children of the Corn was pitch perfect fodder for us young horror hounds back in the eerie early eighties; kid-centric, devoid of excessive gore and sex, but just scary enough to seem like forbidden freaky fruit… and since I grew up in the ass-end of nowhere, we had plenty of local cornfields to add to the overall effect of this fright flick… but that’s all warm and fuzzies… how does this hold up without the benefit of nostalgia?

Pretty damn great if you ask yours cruelly!

While a tad slow burn, this flick nevertheless contains plenty of tension among the more absurd moments that I know you lascivious lot eat up with a sinister spoon!

Where else would you get killer kids, animated demons, psychic premonitions, anti-religious rhetoric, diner-centric slaughter… not to mention solid acting from all involved (with the aforementioned Franklin and Gains playing their roles to the hilt, and creating some truly legendary horror biz performances)… nowhere but here cats n’ creeps!

It all adds up to a putrid picture that delivers both suspense and nonsense in equal measure, and that is a wicked wonder indeed!

Adding to the fun on this 4K UHD from Arrow Video (along with MVD Entertainment) are a cornocopia of bonus features, lead by two audio commentaries, the first featuring Children of the Corn historian John Sullivan and journalist (which covers the nuts and bolts of the film’s production and legacy), and the second showcasing members of the cast and crew in a lively, anecdote-packed chat, followed by an archival retrospective look at the film featuring director Fritz Kiersch joined by Franklin and Gains.

Next we get a more modern look at the locations utilized during filming (curtesy of Sullivan), a brief chat with actor Rich Kleinberg discussing his sequence that was cut from the finished picture, a storyboard gallery, and the film’s trailer.

Also included is a short film adaptation of Children of the Corn which stays a tad truer to “the King”‘s original piece… and honestly it’s pretty fuckin’ awesome we can contrast and compare these versions!

If you like your King adaptations down n’ dirty (with just a sprinkle of mainstream Feel Good Inc.), Children of the Corn is for you; it’s blasphemous, rough, and maintains that independent horror spirit through and through!