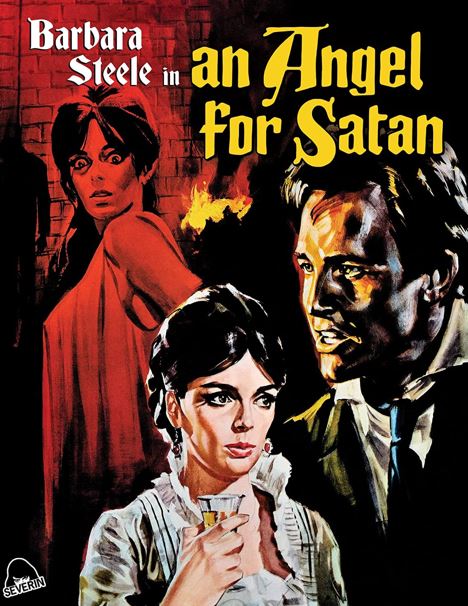 The Count of Montebruno (Claudio Gora), is gettin’ his palatial pad, located in a tiny Italian lakeside village, all nice n’ tidy because his gorgeous niece Harriet (Euro-horror mainstay Barbara Steele) is a-comin’ to town!

While getting his Mister Clean on, the count discovers a forgotten antique statue… a statue that just so happens to look exactly like Harriet. Speaking of ol’ H; she begins holding sway with the other inhabitants of the household, all while the bodies keep piling up around town… which the inhabitants are sure are related to a curse associated with that arcane artwork.

What secret does that seemingly idle idol possess and how does it relate to Harriet?

Directed and co-written by Camillo Mastrocinque (along with Giuseppe Mangione), An Angel for Satan is a Gothic thriller absolutely packed with everything that makes that genre so damn spellbinding!

We get the old, dark mansion located in secluded environs, a fair young woman in residence… walking among those deep shadows while an ancient family secret and hints of the supernatural swirl about… and all of this is, at it’s core, a loosey-goosey adaptation of Sheridan Le Fanu’s 1872 novel Carmilla; a tale bursting at the bodice with hearty dollops of eroticism and lesbianism (and you can bet your arcane asses those elements were retained, though the supernatural elements between the two stories differ).

While the locations and atmosphere are tight and outta sight (with Giuseppe Aquari’s beautifully chiaroscuro cinematography adding to that greatly), the real hero of this piece is Steele, who plays her role with equal parts innocence and cruelty as the narrative demands… hell, the woman out acts the rest of the cast with her eyes alone! A mesmerizing performance that’s worth the price of admission alone in my not-so-humble opinion!

Speaking of “price”, those fine fiends at Severin have included a host of special features on this Blu-ray release that make this even more of a vicious value to fans of the ghoulish Gothic genre!

First up we get a duo of audio commentaries; one from Steele herself, along with horror film historian David Del Valle (who brings his usual delightful blend of sass and knowledge… though he needs to stop pronouncing that “D” in Django… ) and the other from critic and author Kat Ellinger (who provides a bounty of information, as is her way… seriously man, this lady is the goods if you want to know about Euro-horror… and you do… you fuckin’ do… ).

Also included are the film’s trailer in standard and extended versions (the later of which was recently discovered, but is missing sound in places).

If you are looking for a flick to supplement your Corman Poe adaptations, or want more of the magic harnessed when Steele first went down Italy-way for Mario Bava’s 1960 Witchy masterpiece Black Sunday (which incidentally shares some story points with An Angel for Satan), then this is the putrid picture for you… a true hidden gem of a Gothic thriller, and is absolutely not to be missed!