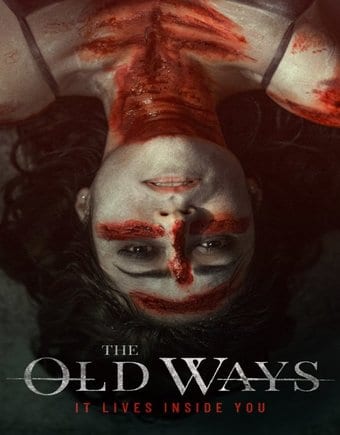 Cristina (Brigitte Kali Canales), a journalist from L.A., has returned home down Mexico way to investigate some local ruins.

There are a few snags on this workcation however, as the heroin addicted, childhood exorcism witness has been set up by her cousin who believes she is possessed. To that end she experiences the hospitality (read: her ass is chained to a bed in a dank cell and she’s forced to drink more goat milk than one would assume to be pleasurable) of an ancient bruja,,, a shaman witch if you will, named Luz (Julia Vera) and her son Javi (Sal Lopez) who go right ahead and work an exorcism on her ass right quick!

Cristina naturally she assumes this is bullshit (her own past be damned!), but before you can say no bueno, that bruja begins pulling human teeth and snakes out of her belly… just reached right on in and pulled that shit out , they did… well, the teeth… the snake got away…

That helps her believe that perhaps she may be possessed after all… well that and barfin’ up a Rapunzel-style hunk o’ hair… and she’s right, as her troubled part and even more troubled present have lead her to be easy prey for Postehki, the death god of broken things.

Director Christopher Alender (working from a screenplay by Marcos Gabriel) delivers a solid, if at times leisurely-paced, exorcism yarn with The Old Ways… a fright flick that examines the whole demonic possession bag through a different cultural point of view.

Here we get to sample the Mexican take on the classic horror trope, and this does provide plenty of different mystical methodologies (more spiritual, less stuffy-ass church-based nonsense) and devious deities to contend with, but as is always the way we get plenty of teeth gnashing, puke, and surly supernatural entities.

Along with that we get plenty of deep character work as we get to learn all of Cristina’s hopes and fears in detail, as well as getting to know at least one of her “captors” a bit… which works both for and against the picture, as Cristina really is a well-developed (and acted… seriously, Canales rocks the shit out of her role) heroine, but her life biz gets in the way of propelling the preternatural punches in a forward trajectory from time to time.

So, yeah… we get some slow burn here cats n’ creeps… except for the third act, which admittedly contains a great twist, which comes across a bit rushed.

The one performance I really wanted to single out is Vera as Luz. This woman looks cool as hell, and delivers a performance that ranges from completely terrifying, to reassuring, to even sympathetic… all with a minimum of dialog. It’s a kick-ass bit of acting and really adds to the picture immeasurably.

Another plus is the lack of flashy, CG effects work, we get brief occurrences here and there, but for the most part, the gore and other effects are practical (and well-done throughout). The film also contains a rich color palette of cold, blue stone and rich earth tones that give the film a more “natural” feel than others of it’s ilk, and a fantastic score from Ben Lovett that delivers dependable fright flick cues along with folk overtones.

While we are speaking of “additional” things, let’s take a moment and discuss the special features present on this Blu-ray release from Dark Star!

Included are: an audio commentary track featuring Alender and Gabriel, a collection of deleted scenes, a series of featurettes detailing the film’s production, a selection of storyboards, and the film’s theatrical trailer.

While a bit janky pacing-wise, The Old Ways nevertheless delivers a top-shelf demonic possession picture with enough unique elements to make it worth giving a wicked whirl!