Movie Reviews: “What Josiah Saw” and “Let the Wrong One In” (Screamfest)

One of the darkest gothic horror tales in recent memory is director Vincent Grashaw’s What Josiah Saw. Rich in ghosts, curses, premonitions, and other supernatural elements, the story is also grounded in the real-world horrors of abuse, suicide, and the lingering effects of these and other trauma-inducing incidents. Robert Patrick stars as Josiah Graham, alcoholic, abusive patriarch of a family made up of three adult children, two of whom want nothing to do with visiting the family property where they grew up — though, naturally for this plot, they eventually must. Tom (Scott Haze), the youngest of the siblings, lives at the home, still suffering abuse and wild flights of fancy from his father. Eli (Nick Stahl), the eldest, is an alcoholic loser in debt with criminals so badly that he must go on a robbery job immediately or be shot on the spot by the local crime boss. Mary (Kelli Garner), the middle child, suffers psychological problems that prevent her and her husband from adopting a child. Though the three haven’t spoken together in ages, a letter each receives forces them to visit the family home, reopening old wounds and leading to a dread-ridden third act. Each character is flawed and unreliable, and the film concludes with a sequence that will sway some viewers from their original line of thought regarding the film’s events and characters. What Josiah Saw is heavy stuff, with Grashaw doing a brilliant job at the helm, working from a screenplay by Robert Alan Dilts that pulls no punches and aided by superb cinematography from Carlos Ritter. The lead cast members put on an absolute acting clinic, with the supporting players also turning in fine work. What Josiah Saw offers rich characterizations, jolting family drama, and thoroughly gripping horrors.

Let the Wrong One In 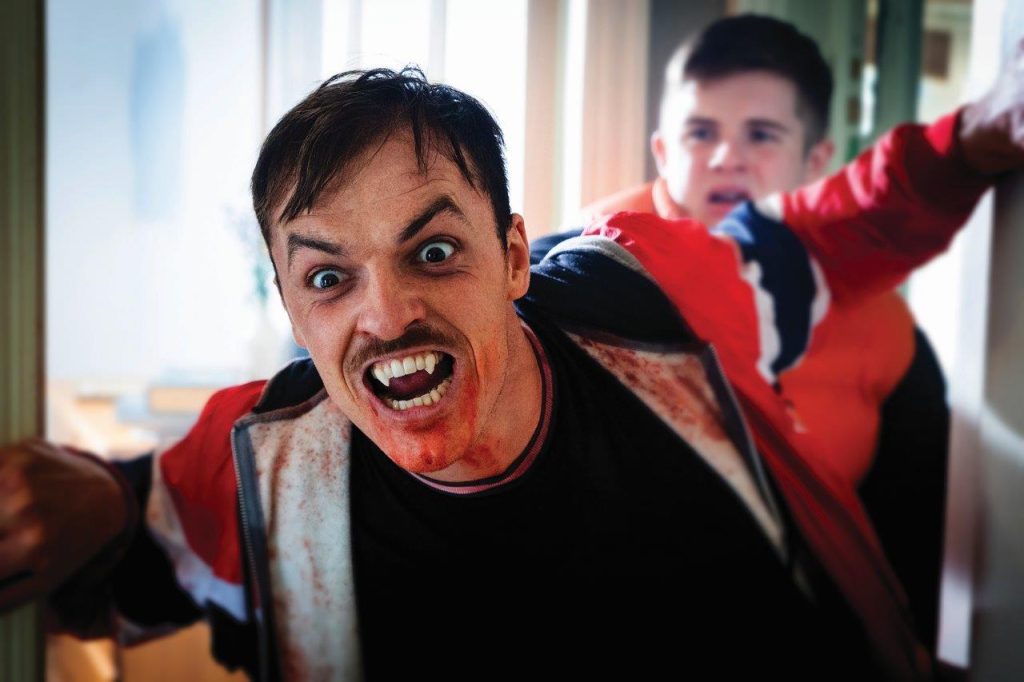 As you might guess from the title riffing on 2008’s terrific Swedish shocker Let the Right One In, director Conor McMahon’s Irish feature Let the Wrong One In is a horror comedy focusing on vampires — and a fun film it is. Skewering practically every  bloodsuckers cinema trope you can think of while also taking a lighter-than-usual look at the parallels of vampirism and substance addiction, this film finds Matt (Karl Rice) having to deal with his older brother Deco (Eoin Duffy), who has been kicked out of the house by their mother (Hilda Fay). Deco hasn’t just come home with a hangover or drug-related problem this time, he has been bitten by a vampire and become one of the undead himself. Enter Henry (Anthony Head of Buffy The Vampire Slayer fame), trainspotting enthusiast and vampire slayer, who has come to drive a stake through Deco’s heart. Henry was engaged to Sheila (Mary Murray) before she was turned into a vampire during her bachelorette party and became the leader of a plan to turn all of Dublin into the undead. Loaded with terrific-looking practical effects and some deliberately laugh-inducing CGI effects, there is plenty of splatter and gore on hand to go with the abundant amount of humor, which ranges from sly wordplay to nutty slapstick to references to classic horror films, and beyond. McMahon juggles horror and humor splendidly, and his cast members all turn in top-notch performances. Horror comedy fans should put this quality zany romp on their need-to-see lists.

What Josiah Saw and Let the Wrong One In screened as part of Screamfest, which ran October 12–21, 2021 in Los Angeles, California.