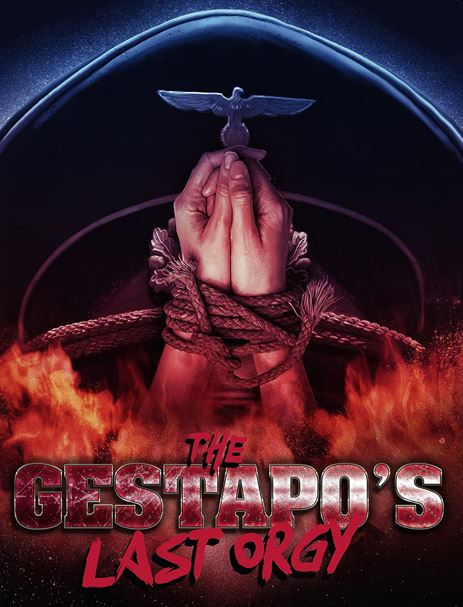 Lise (Daniela Poggi) returns to the place of her internment after the close of world War II, and begins to relive her terrifying misadventures in a concentration camp utilized as a bordello by the most Italian German officers you are ever likely to lay eerie eyeballs upon.

Anyway in the face of that debauchery, Lise stands resolute… but she’ll have more than the Commandant to contend with, as the camp is co-run by the sadistic Alma (Maristella Greco), a female SS who loves watching her pet Doberman’s eat ladies on their periods (these dogs couldn’t be less into it… so expect bored animals assing around while dramatic music blares from the speakers and fast edits ensue).

Lise maintains her poker face throughout, but will her resolve last as the atrocity scale goes off the fucking charts?

Once the grindhouse caught a glimpse of Naziploitation it seemed all common sense in regards to what should be shown to an audience was obliterated. Here were real life villains that performed horrors undreamed, so why not give them carte blanch to be evil as fuck on the big screen… and since they are so hated, any crime they commit seems reasonable and acceptable in the confines of the silver screen… and that mother fucker Caneveri really took that to new heights in this putrid picture!

Along with the craziness mentioned up yonder, ol’ C-dawg (along with Antonio Lucarella) presents sequences of our protagonists waxing philosophical before eating human stew and cooking  snaked woman alive (sounds horrible… and it is, in theory… but believe me, everything in this film is so over-the-top that is becomes as cartoony as it is sadistic), a person being skinned so that his tatoo can be displayed in a picture frame for all eternity, women being kicked down a slide into a vat of acid (some of them look bored as fuck too), and of course, vomiting on rats.

To enhance all of the above, 88 Films have provided a nice selection of special features on this Blu-ray release which begins with two audio commentaries (one featuring genre film experts Troy Howarth and Nathaniel Thomson, and the other courtesy of critic and author Samm Deighan… both absolutely excellent listens) that examine the film’s production, and it’s legacy… as well as it’s place in the Nazipolitation genre.

This all begs the question, would it be easier to swallow this if it wasn’t surrounded by the echo of real-life tragedy?

← Prev: Star Studded Trailer Premieres For Epix's Sci-Fi Horror Series 'From' Next: An Army Of Chuckys Are Unleashed In The Promo For Next Week's Season Finale →