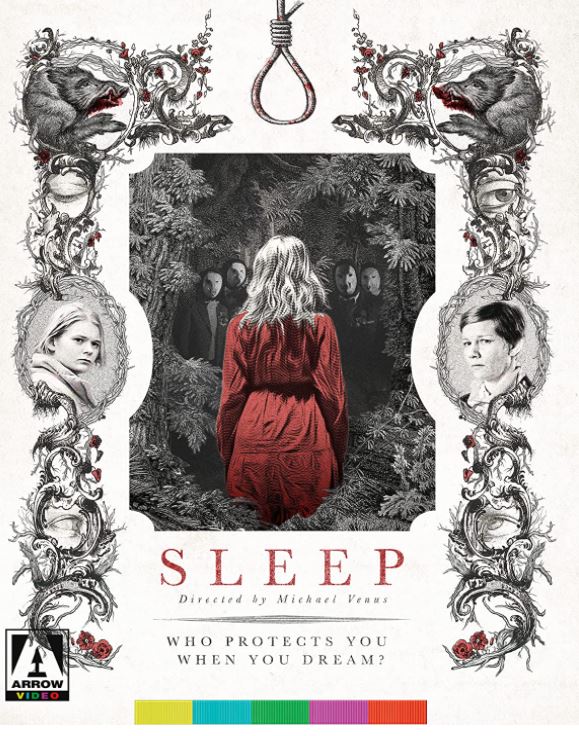 Mona (Gro Swantje Kohlhof) heads to a hotel in the remote village of Stainbach after her mother, flight attendant Marlene (Sandra Hüller), falls victim to a severe mental episode while staying at the same location… a location that has been plaguing her chronic nightmares.

Once there, Mona finds herself in a seeming fever dream filled with boars, ancient houses in the woods, and visions of suicides past that took place on those putrid premises… not to mention the hotel’s owners acting weird as all fuck… and those “sex” dreams…

Will our hero uncover the town’s dark secret and how does it relate to her family?

If there’s one thing director Michael Venus’ (who co-wrote the picture with Thomas Friedrich) Sleep is it’s dour… and weird… and a slow burn… alright, it’s a lot of fuckin’ things, including Grade-A fuckin’ excellent!

Adding to the positives here is a stellar performance from Kohlhof who travels through this surreal misadventure in a perpetual calm, she never becomes a shrinking violet, or screaming hysteria victim… she just remains steady and goes the course and that gives this fright flick a unique aura… placidity with mounting dread.

This is echoed in the methodical pace of the film which relies on the slow uncovering of information as to just what in the hell is going on rather than splashy, effects laden shock sequences… and the almost cheery rural location of the film stands in sharp contrast to the dreary biz at hand, which in turn only adds to the hallucinatory spell the film casts.

Adding to the viewing pleasure Sleep provides, Arrow Video have included a host of bonus material on this Blu-ray release including: an audio commentary by film critic and historian Kim Newman & author Sean Hogan discussing the film’s production and themes, a duo of visual essays further exploring the underlying themes of the film (courtesy of film scholar Alexandra Heller-Nicholas and film critic Anton Bitel respectively), an interview with anthropologist, dream researcher, and filmmaker Louise S. Milne (discussing the folk horror roots of the piece), an introduction to the picture by director Venus and star Kohlhof (as well as an interview with the same), a compilation of festival intros, a behind-the-scenes featurette, deleted scenes, a look at artist Christoph Vieweg’s dream journal sketches utilized to illustrate Marlene’s nightmares in the film (my favorite of the special features assembled here if your keeping score at home), a trailer, and an image gallery.

All of the above comes wrapped up in a reversible sleeve featuring art by Oink Creative which also contains an illustrated collector’s booklet featuring an interview with Venus, the Brothers Grimm fairy tale “Frau Trude” (an inspiration for the film), & more, and a double sided fold-out poster.

A true modern fairy tale turned fever dream, Sleep is a journey into terror that is unforgettable, unsettling, and well worth the trip!