All 44 Episodes Of “Freddy’s Nightmares” Coming To Screambox 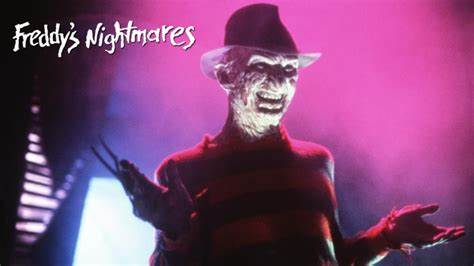 Just when you thought it was safe to go back to sleep, Screambox is releasing all 44 episodes of the iconic horror series “Freddy’s Nightmares”.

“Based on one of horror’s most storied franchises, “Freddy’s Nightmares” is an anthology series starring the original Freddy Krueger, Robert Englund. Airing from 1988 to 1990, each episode tells a different story of a dark rooted and grim nature that takes place in this fictitious town on Elm Street; the same setting as the A Nightmare on Elm Street films. The series picks up with where the films left off, with Krueger terrorizing the citizens of his hometown and taking his revenge out through their dream.”

The producers of the series not only retained Englund for “Freddy’s Nightmares” but also cast a slew of unknown names who later became very notable actors including Brad Pitt, Lori Petty, John Cameron Mitchell, and Mariska Hargitay.

Long considered a favorite villain among horror fans, Englund’s Krueger has been frightening and delighting audiences for the past four decades from the first terrifying nights on Elm Street to battling Jason on the shores of Crystal Lake. Englund will next be seen in the upcoming fourth season of “Stranger Things.” He will also star alongside Asa Butterfield (The Wolfman) in Choose or Die, formerly titled CURS>R, set to premiere on Netflix on April 15.

It will mark the first time the show has been available to stream on a subscription service. In addition, Screambox will debut Knightriders in March, the 80s film written by George A. Romero and starring Ed Harris (Westworld, Apollo 13) and Tom Savini (From Dusk Till Dawn, Dawn of the Dead). Also streaming is all 44 episodes of “Masters of Horror” and “13 Nights of Elvira.”