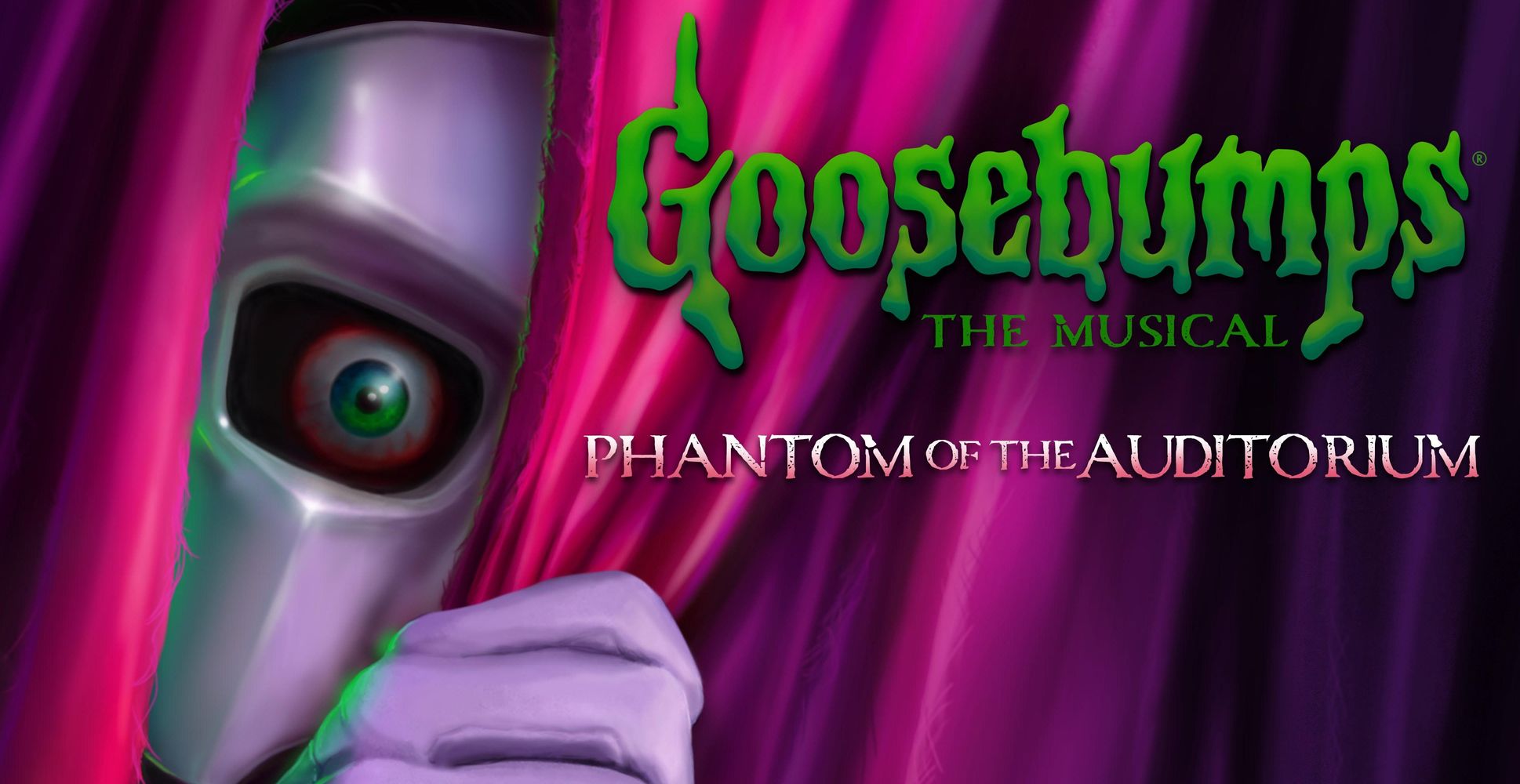 I don’t know about you, but a good musical always gives me “goosebumps.” Speaking of musicals and goosebumps, “Goosebumps the Musical: Phantom of the Auditorium” has just hit #1 on the “Hot New Releases” chart on Amazon, and soon, the new collectible album, based on the books by R.L. Stine, can be yous yours to own.

The CD release marks the first time the album will be available in physical format, following the success of the album’s digital release by Ghostlight Records. Since the release, the album’s viral hit song, “The Story of The Phantom,” has garnered millions of streams across TikTok, YouTube, Spotify, and other platforms and spawned hundreds of fan-made cover videos. Just in time for the Goosebumps® series’ 30th anniversary in July, the collectible CD edition features a full-color 32-page booklet including the lyrics, synopsis, and never-before-seen photos of the cast from the recording sessions, as well as the cover art by legendary Goosebumps illustrator Tim Jacobus.

“Some of my favorite memories include flipping the pages of a new Goosebumps book or the CD booklet of a new musical cast album, so it’s a huge thrill to be releasing this combination of both,” says composer/lyricist Danny Abosch. “In this increasingly digital era when CDs are all but disappearing, I think having that physical connection with the music is more special than ever. And I’m so excited that at long last, Goosebumps fans (myself included) will finally be able to add a new stunning Tim Jacobus cover to their collections.”

In “Goosebumps The Musical: Phantom of the Auditorium,” Brooke and Zeke are thrilled to be starring in a mysterious show called “The Phantom” and aren’t the least bit frightened by the old legend that the play is cursed. But when strange, creepy messages start appearing, and a masked menace starts disrupting rehearsals, they begin to wonder: what if there is a ghost haunting their school, determined to stop the show?! Prepare to get goosebumps as they race to solve the mystery in this thrilling—and chilling—a new musical based on the classic series by R.L. Stine.

The album’s all-star cast includes Krystina Alabado (Mean Girls, “Better Nate Than Ever”), Alex Brightman (Tony Award® nominee for Beetlejuice), Noah Galvin (Dear Evan Hansen, “The Real O’Neals”), Sheryl Lee Ralph (Tony nominee for Dreamgirls, “Abbott Elementary”), Will Roland (Dear Evan Hansen, Be More Chill), and Stephanie Styles (Kiss Me Kate, “Zoey’s Extraordinary Playlist,” “Loot”), in addition to a special appearance from R.L. Stine himself. The music and lyrics are by Danny Abosch, and the book and lyrics are by John Maclay. The album cover is a new work by Tim Jacobus, illustrator of the iconic original Goosebumps art.

The production premiered in October 2016 at the Todd Wehr Theater in Milwaukee, WI, and at the Newmark Theatre in Portland, OR. The show went on to major productions at The Walnut Street Theatre in Philadelphia, PA, The Coterie Theatre in Kansas City, MO, Main Street Theater in Houston, TX, and more. It was originally commissioned by Oregon Children’s Theatre and Milwaukee’s First Stage. The Original Studio Cast Recording was released on October 29, 2021, by Ghostlight Records in digital and streaming formats.

GOOSEBUMPS® is one of the best-selling book series of all time, with more than 400 million English-language books in print, plus international editions in 32 languages. Published by Scholastic Inc., the smash-hit books became a global mega-brand and a $2 billion consumer products program at retail and continue to be a success with the current Goosebumps SlappyWorld series. The hit live-action Goosebumps TV series was rated #1 for five consecutive seasons in the 1990s. The property also spawned two hugely successful motion pictures starring Jack Black, released in 2015 and 2018, which together grossed more than $250 million. A new live-action TV series was announced for Disney Plus in February 2022. The Goosebumps series made R.L. Stine a worldwide publishing celebrity (and Jeopardy answer), and Goosebumps was named the world’s bestselling book series of all time in the 2003 Guinness Book of World Records. July marks the 30th anniversary of the beloved series.

R.L. STINE, called “perhaps the best-selling children’s author of the 20th century” by Stephen King, is the creator of the bestselling Goosebumps series, which has more than 400 million copies in print worldwide and will celebrate thirty years in 2022. Goosebumps is one of the best-selling series of all time and inspired a popular television show, as well as a feature film starring Jack Black that opened at #1 at the box office. The recent film adaptation of his Fear Street series was ranked the #1 movie on Netflix in July 2021.

DANNY ABOSCH is a composer/lyricist whose musicals include Fancy Nancy The Musical (Off-Broadway 2012-2014, National Tour 2013-2015, over 100 productions worldwide), Off the Wall (First Prize winner of NMI’s 2014 Search for New Musicals, 2015 workshop, and concert in Los Angeles), Placebo (winner of the 2012 PMTP Development Award, workshop at the Pasadena Playhouse directed by Ryan Scott Oliver), and Miles & Me (2014 workshop at the Musical Theatre Factory). Danny’s original songs were featured in The Way We Dance by playwright Kathleen Clark, directed by Marsha Mason. Danny is a graduate of the University of Michigan and of NYU’s M.F.A. Graduate Musical Theatre Writing Program. Danny studied musical theatre writing in the Johnny Mercer Songwriters Project at Northwestern University, where he worked closely with Lin-Manuel Miranda and Craig Carnelia. Danny’s songs have been chosen by William Finn for his concert series “Songs By Ridiculously Talented Composers and Lyricists You Probably Don’t Know, But Should” and by Ahrens and Flaherty to feature at the Dramatists Guild National Conference. He has also been selected as a finalist for the Jonathan Larson Grant and the Kleban Prize in Musical Theatre. Danny’s music has been featured on TV shows such as “Dance Moms” and “Last Call with Carson Daly” as well as in the films Waiting in the Wings and Missed Connections.

JOHN MACLAY is a playwright and lyricist with over a dozen professionally produced titles. In addition to Goosebumps The Musical: Phantom of the Auditorium, he has written The Legend of Rock Paper Scissors (with Eric Nordin), Geronimo Stilton: Mouse in Space, Little Piglet Gets a Sister (with Brett Ryback), Just a Little Critter Musical (with Brett Ryback), Nancy Drew and Her Biggest Case Ever (with Jeff Frank), Anatole (with Lee Becker and James Valcq), The Revolting Teens of Sherwood (with Joe Foust), Nate the Great (with Brett Ryback), Hopper, and Apollo and the Trials of Hercules (with Joe Foust). This fall, his newest show Arthur and Friends Make a Musical (with Brett Ryback), based on the Marc Brown book and PBS Kids series, “Arthur,” will premiere at First Stage in Milwaukee, WI, where John serves as a resident playwright. John’s work as an actor or director has also been seen at myriad theaters, including the Utah Shakespeare Festival, Chicago Shakespeare Theater, Milwaukee Shakespeare Company, Defiant Theatre, Bunny Gumbo, Bialystock and Bloom, Skylight Opera Theatre, and more.

Get your copy of “Goosebumps the Musical: Phantom of the Auditorium” from Amazon on June 24, 2022.

“GOOSEBUMPS THE MUSICAL: PHANTOM OF THE AUDITORIUM” TRACKLIST

6. The Story of The Phantom

9. Is Somebody Down There? 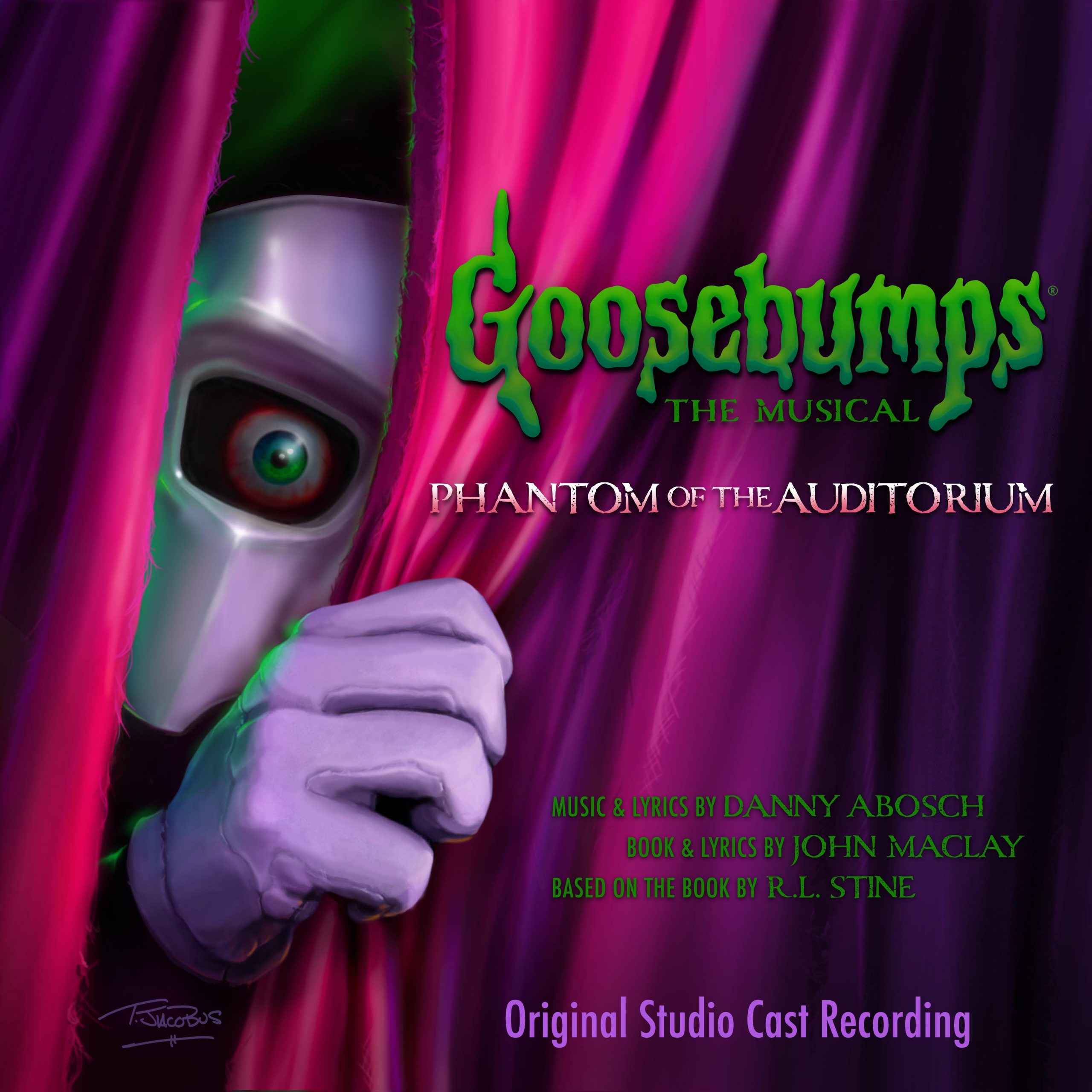