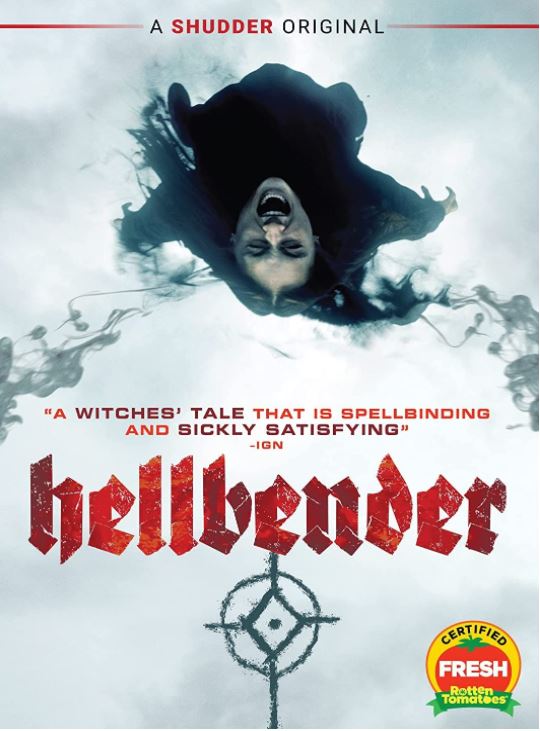 Izzy (Zelda Adams) lives a reclusive life deep within the woods in a mountain top house she shares with her mother (played by her real life mother Toby Poser… but more on all that in a bit my fiends) where the two of them get up to all manner of mother/daughter biz primarily consisting of creating some sweet-ass tunes with their two woman band, Hellbender, while glammed up in their home rehearsal space and eating pinecones, roots, and other assorted plant-based crunchy bits.

Things are all art and river swimmin’ for Izzy, so life is pretty damn good except for one thing… she’s sick and cannot leave her property or interact with others. That of course goes to hell in a handbasket when Izzy learns that a girl her age lives just opposite her and it isn’t long before Izzy befriends said girl, Amber (LuLu Adams) by name, and soon that ol’ hoary chestnut “teen drinking” eventually leads our heroine to consume a worm from a bottle of tequila which causes her to go ape-shit to put it mildly.

Of course there is nothing that would be considered “normal” by society’s standards in either Izzy and her mother, but the truth of what they truly are is darker than anyone could imagine!

Let me just say; “(Un)Holy Hell Hellbender, you are the absolute shit!!!”

Kicking off the positives (expect plenty of those shits, cats n’ creeps), Zelda Adams and Toby Poser (who also wrote and directed the film along with Zelda’s father/Toby’s husband John Adams.. who in turn has a small role in the film as well) are pitch perfect in their respective roles, and given they are actually mother and daughter the authenticity of their relationship grounds the piece, no matter how bizarre the proceedings get… and boy do they, which is a wickedly wonderful thing indeed!

Speaking of which, this fright flick (though it’s much more than that… just bear with me) Hellbender is a pitch perfect blend of psychotronic cinema and folk horror, replete with witchy rituals that seem authentic, mind-melting visuals, and downright strangeness at every turn. It’s a real trip of a journey that goes from earthy spells and blood rituals to hallucinogenic mind fucks to compelling coming of age story and back again with ease and skill!

And yes, no matter how off-kilter and arcanely awesome the mythology and world building in this picture are, at it’s core it is a poignant “coming of age” yarn that is perfect for every teen that has felt like the outsider, but thankfully this particular story has our heroine lean even further into her strangeness and embrace it which gives her a real power over anyone that stands against her. In short, this is the type of story monster-kids (of a certain age) will find empowering in a way that most conventional stories of this nature usually always fail to do.

Adding to all of the above is the lush, green forests of upstate New York (stomping grounds yours cruelly is infinitely familiar with) that add the perfect, near fairy tale setting to the proceedings that only enhances the material at hand!

On the subject of enhancements, This DVD release from Shudder and RLJE Films features some enticing glimpses behind the creepy curtain of how this fright flick came to be! Included are pieces on the films rock-solid visual effects, bloopers, and behind-the-scenes footage, along with four Hellbender videos (all as visually striking as the feature presentation) and a brief Tik Tok short from Zelda Adams.

Bottom line, Hellbender is preternatural perfection; it’s outsider cinema with it’s terrifying toes buried deep in the rich soil of ancient magic and bloodshed, but it never forgets that at it’s core it’s an emotional journey of a young woman coming into her own!

← Prev: Sinister Fishing Adventure ‘DREDGE’ Launches in 2023 Next: Thriller 'Girl At The Window' Slashes Its Way Onto Digital This September (Trailer) →