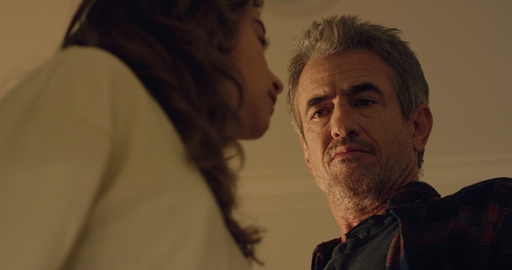 The film centers on “Tara (Odessa A’zion) who is like any other teenage girl, just surviving high school yet her father Ben (Dermot Mulroney), and mother Emily (Leslie Bibb) seem strangely distant. Amidst a nearby spree of gruesome axe murders, Tara has sightings of terrifying entities, forcing her to question her own sanity and shocking ancestry. After a visit to her aunt in a mental asylum and a night in Lizzie Borden’s actual home, Tara realizes she is inextricably tied to the horrifying curse that has plagued her bloodline for almost a century. As victims pile up and the police close in, Tara is left with no choice but to face her own demons.”

Gravitas will release The Inhabitant in over 100 theaters on October 7, 2022. Leading Los Angeles-based sales company Highland Film Group is handling international rights with sales being launched at the Toronto International Film Festival.

“An extraordinary cast and passionate filmmakers came together for Kevin’s chilling script and sparks flew.” said Marucci, “Then our goal was to partner with distributors who were as excited about the film as we were. We found that in Gravitas Ventures and Highland Film Group.”

“This creative team has crafted an incredible horror movie with THE INHABITANT, which is not only effective and scary, but constantly engaging and entertaining. Movies like this are the kind that stay with you long after the credits roll,” said Brett Rogalsky, Manager of Acquisitions at Gravitas Ventures.

“We are thrilled to be partnering with the outstanding team at Gravitas Ventures on The Inhabitant,” said Highland Film Group CEO Arianne Fraser. “With an overriding theme of female empowerment coupled with a thoroughly modern approach, The Inhabitant will definitely appeal to the younger generation. This is an intense horror film full of suspense and intrigue and is a great addition to our TIFF slate,” added Highland Film Group COO Delphine Perrier.

Gravitas Ventures’ Manager of Acquisitions Brett Rogalsky negotiated the deal with CAA Media Finance on behalf of the filmmakers.

← Prev: Hulu Announces "The Paloni Show! Halloween Special!" Next: Adaptation Of 'The Registration' From 'Night House' Writers Finds Its Star →