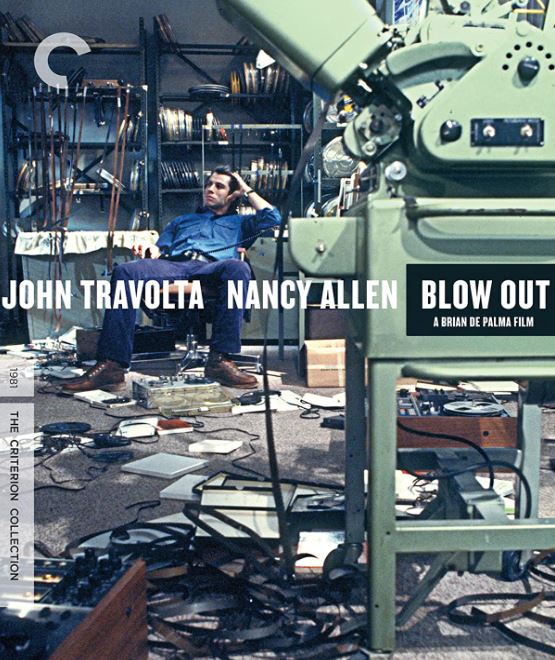 After his boss sends him out to record better sound effects for the upcoming slasher-epic Co-ed Frenzy, sound technician Jack Terry (John Travolta) heads to a local park to record where he witnesses a car careen off the road into a nearby body of water.

Being a stand-up kinda guy, Jack dives in and rescues Sally (Robocop‘s Nancy Allen) whom he quickly learns was an escort out on a fling with prominent politician Governor George McRyan, who died in the accident by the by, and the powers that be are none to happy that anyone knows about Sally and the Gov’s sexcipades.

Even though he vows to never mention Sally in public after being semi-strong armed, Jack begins investigating the incident via the audio he recorded that fateful night… audio that contains a distinct gunshot before the Governor’s tire blows out leading to the accident.

Believing an assassination attempt took place, Jack edits together stills taken from a recording filmed by Manny Karp (a scenery chewing Dennis Franz), who just so happened to be doing movie shit in the park that night as well, that shows the actual muzzle flash and smoke of the rifle Jack believed he heard.

As the mystery begins to unravel and secrets are learned, Jack and Sally may not survive to find out Whodunit!

Beginning with an accurate representation of what everyone thinks ’80s slashers were like before dovetailing into an impressive Hitchcockian Neo-noir pseudo-giallo, writer/director Brian De Palma’s Blow Out delivers a great deal of suspense and tension as it’s cat and mouse game of political assassination and high tech (for 1981 anyway) surveillance plays out for nearly two fast paced hours.

As nerve-racking as the events on screen become, their impact is heightened due to a fantastic cast featuring one of the best performances of Travolta’s career that showcases him bouncing from laid-back smart ass to absolutely tortured and increasingly (and rightfully) paranoid man on the edge with equal skill.

Adding to the mix is a fantastically amped-up performance from Franz as the impossibly sleazy photog Karp, and an absolutely chilling turn from the legendary John Lithgow as a serial killer by proxy (among other unsavory things).

Allen is good here as well, but her “ditzy moll” routine may grate on the nerves of some regardless of how appropriate it is with a film with those aforementioned noir vibes.

The aesthetics are helped immeasurably by the bleak urban locale of early ’80s Philadelphia which is a change of pace from rundown New York City, though both look equally unpleasant and the city becomes every bit as much of a character as the humans onscreen and adds layers of grit, grime, and cold detachment.

Speaking of detachment, there is a social commentary element to this piece as well as Jack desperately tries to get everyone to believe his tale only to be met with a resounding “who cares” from the people that should very much fucking care about such things as political assassinations the most!

While sound is by far the most important element at play in the story at hand, this 4K UHD straight from the Criterion Collection boasts a 4K restoration that is superior to the previous 2011 2K version featured on the included Blu-ray. The picture is noticeably sharper as our the colors, and of the two, the 4K is the “go to” choice for those that want to have the best viewing experience.

No slouch is the audio mix utilized here that provides a suitably robust and immersive experience while showcasing the sweet funk that is Pino Donaggio (The Howling) score!

As for special features, they are to be found on the aforementioned Blu-ray and include: interviews with De Palma (from 2010 and conducted by filmmaker Noah Baumbach), Allen (from 2011), and cameraman/Steadicam inventor Garrett Brown (discussing the faux slasher film that opens the picture), and a collection of on set stills captured by photographer Louis Goldman.

Also to be found here is De Palma’s 1967 experimental film Murder a la Mod, which contains similar themes to Blow Out (and footage of which can be found in the film).

Lastly we get the film’s theatrical trailer.

Taut, tense, and full of style and atmosphere, De Palma’s Blow Out is one hell of a gripping thriller… and this latest release makes it look better than ever!