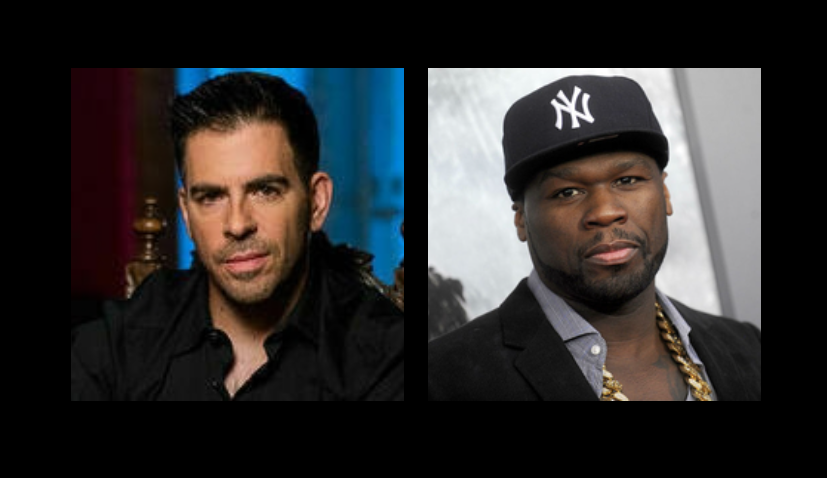 Horror maestro Eli Roth and rapper Curtis “50 Cent” Jackson have teamed up for a three-picture deal with 3BlackDot, Deadline reports. And the films, The Gun, Trackmaster, and Creature House are all horror movies!

Deadine gives a breakdown of the movies:

“The Gun comes from Kirkland Morris. When a young man with a bright future seeks to get revenge for his father’s murder, he finds a gun that is haunted by an evil force.”

“Trackmaster is written by Justin Calen-Chenn. A burgeoning rap duo uses a beat of mysterious origins in their new single and accidentally unleashes an ancient spirit that brutally murders anyone who hears it. After the young rappers make this discovery, the race is on to stop the song’s release.”

“Creature House is from Dallas Jackson and Kevin Grevioux. After the untimely death of a legendary make-up and visual effects guru, a group of his friends and foes gather at his studio, only to find themselves trapped in the artist’s horror movie museum as the exhibition creatures supernaturally come to life.”

“I’m a huge fan of 50 as an artist and producer and am so excited to bring these stories to life. The whole team has put together an exciting trio of films which will terrify and thrill audiences globally,” Roth told Deadline.

There is no word yet when we’ll see the movies released, but we will keep you posted as news comes. You can catch Roth this October on his two new series and his Halloween special on discovery+.