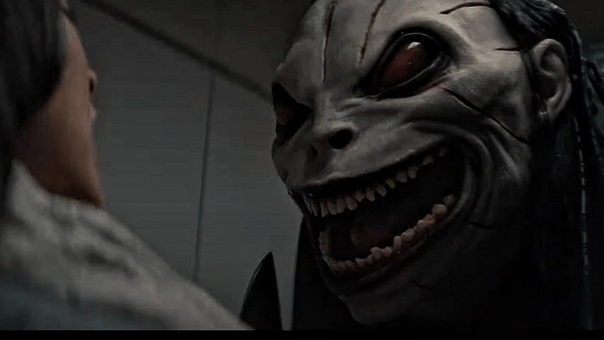 While scrolling through Hulu’s “Huluween” section I stumbled across a movie titled Grimmcutty. The art caught my attention so I decided to give it a try. Here’s what I thought. Warning, there maybe a few spoilers.

First, let me fill you in on what the movie is about. Written and directed by John Ross, Grimmcuttry centers on a teen and her little brother who must find a way to stop a monster brought to life by the hysteria of their parents. After the kids’ parents find out about Grimcutty, which they believe is a social media challenge, they go into overdrive and believe the answer is taking away the kids’ devices. The more concerned the parents get the angrier they become, which drives Grimcutty to attack.

The movie speaks to two points. The first is the world’s obsession with social media challenges and how dangerous they can be, remember the Tide Pod Challenge? The second is the lack of trust between parents and children and the anger that parents can develop as a result.

The cast, which includes Shannyn Sossamon, Sara Wolfkind, Usman Ally, Callac Farris, and Tate Moore, did a decent job, especially Wolfkind who leads the cast. However some of the main characters, like the mother, come across dull.

The monster, played by Joel Ezra Hebner, is a tall freaky thing with a huge head, red eyes and a giant grin filled with large sharp teeth. From a distance, it looks pretty good and is something we haven’t seen before, but unfortunately, up close it looks cartoonish, goofy, and incredibly fake. If the monster would have looked better it would have made the movie better.
Don’t get me wrong, Grimcutty is not a terrible movie. It has it’s good points, like a lead that really puts her heart into her role, and there’s a decent amount of action. It’s not the worse horror film you’ll watch this Halloween season, but it is also far from the best.  If you still feel like giving Grimcutty a watch you can find it now on Hulu.