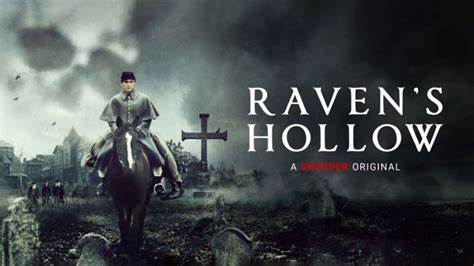 When I found out that there was a movie, Raven’s Hollow, coming out that featured Edgar Allen Poe as the main character I was excited. I’m a big fan of Poe’s works. It has now landed on Shudder and I thought I’d give it a try. Warning, there are spoilers ahead.

The movie begins with a group of West Point cadets traveling down a road. They stop when they see a man, tortured, hanging on a rack, and mortally wounded. After some debate, Poe decides that must find his people. They travel to a dying town to find the dead man’s home, only to learn of a creature (demon?) that is killing the villagers. The cadets, led by Poe, set out to discover the mystery, as well as to find and destroy the creature.

There’s a decent amount of action and a ton of gore in Raven’s Hollow. But the movie’s ending ruins it all. I actually caught myself saying, ‘WTF?” out loud in the movie’s final moments. The ending is strange and contradicts what we’ve been shown about the characters throughout the movie. It just makes no sense.

As for the special effects, they were hit-and-miss. The gore was well done, but when the raven is finally revealed and takes flight, well, it’s just ugly and not in a good way. It lacks detail and just looks weird. It’s like they ran short on funds when it came time to put the CGI monster in the movie.

Even with all the action, the movie lags and suffers from bad acting from much of the cast. It felt like they didn’t want to be there and were just going through the motions. The dialogue is flat and often labored.

The movie did do one thing that I found interesting, it connects back to one of Poe’s most famous tales, The Raven, implying that it is actually about the creature. That was a nice touch.

Raven’s Hollow is a movie you may want to scroll past. It lacks heart, emotion, and a decent monster. If you still want to watch it, you can find it ou now on Shudder.

← Prev: Supernatural Horror 'Prey For The Devil' Possesses A Release Date This Week Next: 'The Sleep Experiment' Will Give You Nightmares This November (Trailer) →