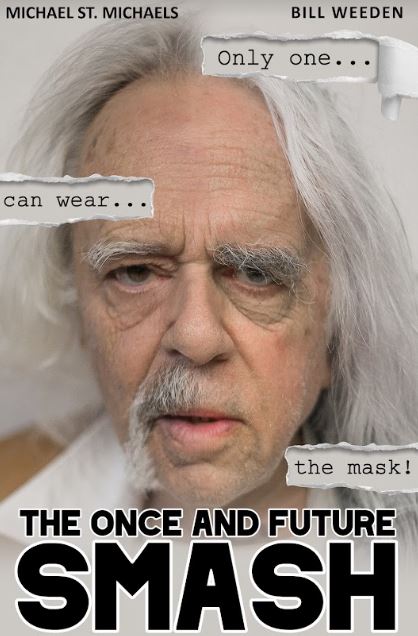 The Once and Future Smash transports us to a universe where a series of fright flicks, the End Zone series by name, was the trendsetter of all mother fuckin’ trendsetters when it comes to our beloved stalk n’ slay slasher genre… right down to the series villain, cannibal football player Smash-Mouth (more on that dude in a second), being the supposed inspiration for The Texas Chainsaw Massacre’s Leatherface, and the film’s twist being lifted wholesale by the original Friday the 13th!

Speaking of Smash-Mouth, two actors had the distinction of playing the sinister sportsman, The egotistical Mikey Smash (The greasy strangler himself, Michael St. Michaels) who portrayed Smash-Mouth for the first hour of End Zone 2 and William Mouth (Sgt. Kabukiman N.Y.P.D.’s Bill Weeden) who took over the role once Mikey was fired for reasons of being an asshole, and created the character’s catch-phrase “Touchdown!”… not that anyone has ever heard it as the last thirty minutes of End Zone 2 have been forever lost to time.

Long story short, the two rivals meet up at a horror convention where they are accidentally placed at the same table to promote an upcoming reboot of the End Zone series… which absolutely no one demands, and soon the announcement of who will bring Smash-mouth to lurid life once again… but will it be Mikey or Billy… or,???

Have you ever wanted to see horror get the absolute Spinal Tap treatment… and have it done so pitch perfectly that the filmmakers even created the first 60 minutes of End Zone 2 so it can exist independently of the mockumentary??! You bet your arcane ass you have, and let me tell ya cats n’ creeps writer/directors Sophia Cacciola and Michael J. Epstein (Magnetic, Blood of the Tribades, Clickbait) truly deliver the ghoulish goods here!

And how do they go about just that? Why by layering mythology and world-building on about one million layers deep, and they get a host of legendary horror icons to offer up their convincing memories of the End Zone series. This is a literally who’s who of the slasher genre and is jaw dropping-ly impressive… hell they even got the legendary maestro Claudio Fragasso and his partner/screenwriter Rossella Drudi (Troll 2) to chime in on the Italian sequel they created (itself merely a re-titled, unlicensed rip-off of the source material… I’m tellin’ you, these folks go fuckin’ deep… ).

Of course the cast on display are top-notch as well with St. Michaels offering up another classic ass-hole performance, and Weeden coming off as completely lovable and endearing… but special mention must be made of A.J. Cutler, who’s eponymous character must be the long-suffering assistant to Smash-Mouth (or whoever played him) thanks to a death bed request from his father who acted in End Zone 2… this dude provides the heart of the picture (along with Weeden) and his role is immediately sympathetic and completely hilarious.

With The Once and Future Smash, Cacciola and Epstein deliver a thoughtful deconstruction of both the slasher genre and the horror fan culture in one deft swoop and the end result is equal parts over-the-top and completely believable… not mention irresistibly fun!