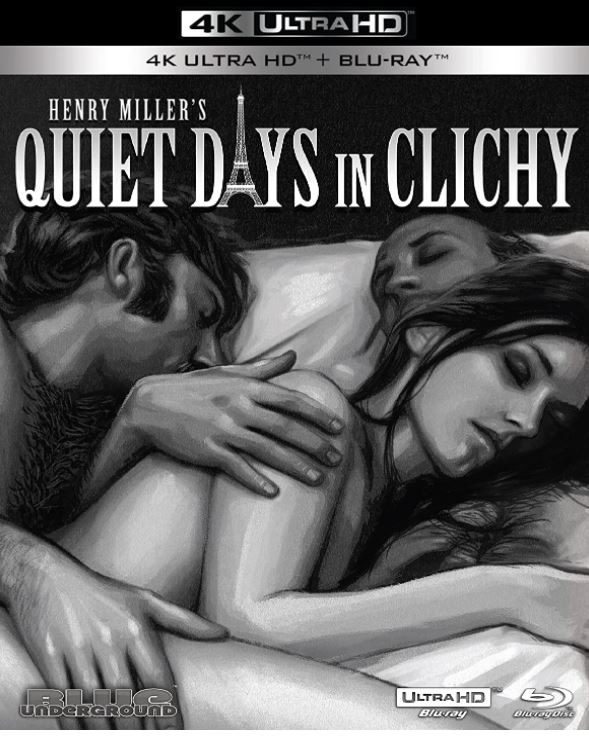 If there’s one thing about  Jens Jørgen Thorsen’s 1970 adaptation of author Henry Miller’s 1956 semi-autobiographical novel Quiet Days in Clichy it’s that it’s light on plot… like lighter than a feather from a rather tiny bird light… and that is very light y’all, dig?

By changing the setting from the 1930’s of the novel to the recently emerged sexual revolution of late 1960’s era Paris it becomes  a natural for presenting the story without as much coherent narrative as one would expect (though the novel itself was no slouch in that department), Thorsen gives us a gloriously offensive whirlwind of absolute carnal madness that definitely sets a tone, if not presenting a strong story.

It’s the gross and obscene presented as art and satire, and when taken as such rather than a straight forward story, the film succeeds greatly.

As for special features present on this release, things kick off with a deleted scene and the film’s theatrical trailer… which brings us to Disc 2!

On the second disc we are presented with a Blu-ray edition of Quiet Days in Clichy and additional extras in the form of interviews with Country Joe McDonald (an admittedly baffling choice of composer for this film), and a duo of interviews with Miller’s editor/publisher Barney Rossett.

Also included are two image galleries (one for posters & stills, and the other for book covers), and a collection of court documents because you can bet your arcane asses that this picture stirred up a whole mess of legal trouble upon it’s initial release!

Well, I’m spent… so in conclusion; Quiet Days in Clichy is a stream-of-conscious, tone poem of a film, filled with a giddy sense of the then-new sexual revolution and this 4K UHD release brings the carnality to life in striking detail!