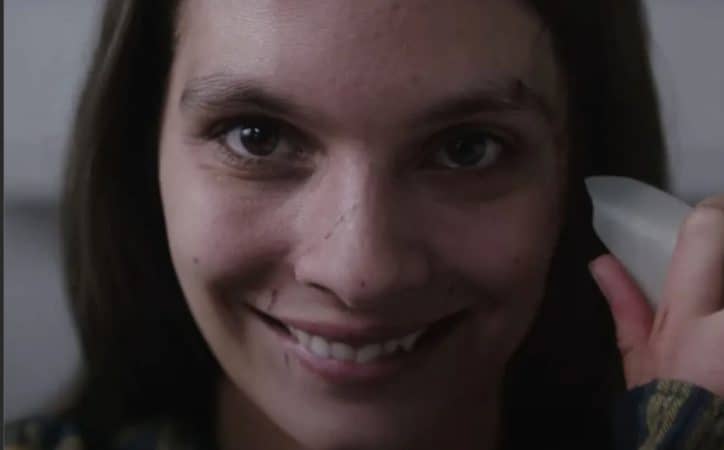 The film centers on a psychologist who, after witnessing the suicide of a patient claiming to be hunted by an entity that shows itself as a loved one and stranger with a big grin, realizes she’s its next victim. Doctor Rose Cotter, played by Sosie Bacon, sets out to discover the entity’s origins, track its victims to find a survivor, and learn how to escape her fate.

If you are a fan of gore, you’re going to like this one. And let me tell you, the scene where the entity is finally revealed is killer! This thing is nasty! Instead of showing the entity throughout the movie, writer-director Parker Finn went with the more impactful horrors, the tension built with subtle signals, the unnerving thought of what if you were treated like you were insane and that no one could save you? In my opinion, it was a great decision. You see, the more we see a monster, the less scary it becomes; however, spending over an hour tense, scared, and left thinking about the story sticks with you much longer. Finn made the right choice.

As for the story itself, it’s interesting, emotional, and twisted. It flows well and has great timing. As for the leading lady, Sosie Bacon, she is fantastic. The way she emoted, especially fear, made her character feel authentic. I have to give props to the director’s choice to play Dr. Cotter’s boss. I am a massive fan of Kal Penn. Kyle Gallner did well as Joel, the doctor’s ex, to whom she turns. Gallner has never disappointed me.

Next up, special effects. There is a lot of blood spilled in the film. Some scenes feature CGI blood, and sadly, it’s obvious. It’s also evident that the evil entity is CGI. This thing is only featured in one scene; it would have been nice for at least some of it to be practical. But hey, that’s just my opinion. I will give them this; it was an excellent concept.

All in all, Smile is a good flick with plenty of action, drama, and some scares. I would definitely recommend it. There may have been a few issues (CGI), but overall, it’s one of the best we’ve gotten this year. Luckily, you don’t have to wait long to see it, you can get your copy on 4K Ultra, Blu-ray, or DVD on December 13th, 2022, and you should. I should also mention that the movie comes with some killer bonus features, which you will find listed below, including the award-winning short film from the director that inspired the feature film.