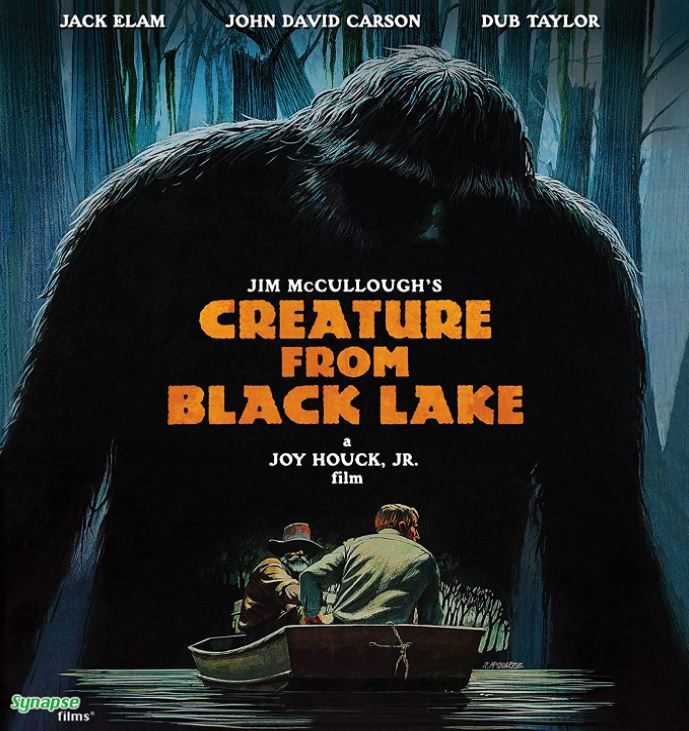 These things dovetail when trappers fall victim to a Bigfoot attack while simultaneously a college professor talks about how said creature has never attacked a human. Speaking of said Cryp-TED Talk, two students from that class, Pahoo (House of 1,000 Corpses‘ Dennis Fimple) and Rives (John David Carson, who would go on to appear in 1977’s nature-run-amok via giant insect shocker, Empire of the Ants) by name, head down to the Louisiana-Arkansas border from their Windy City home to investigate multiple reports of creature sightings over a stretch of decades.

Once there, our heroes discover everyone in town has a bad case of “Shut-the-fuck-up-itis” and info is hard to come by until they meet Orville Bridges (Jim McCullough Jr., who also wrote and produced the film), a local who’s family had a run-in with the creature when he was a baby.

After pissing of the remainder of the Bridges family with their damn jive creature talk, they try makin’ it with some local gals, but end up in jail after encountering Bigfoot… I mean their incarceration had zero to do with monsters, and everything to do with the fact that one of those lovely ladies is the daughter of the town’s sheriff.

Will Pahoo and Rives ever prove the creatures existence, or will the beast remain hidden in the swamp?

The first thing you’ll notice when sittin’ down to watch director Joy N. Houck Jr.’s (Night of Bloody Horror, The Night of the Strangler) Creature From Black Lake, is that the film plays out much like a buddy comedy with Fimple and Carson displaying a believable friendship and comradery that makes the flick both charming (bet you didn’t see that one coming, eh cats n’ creeps?!!) and extremely watchable as the go about their breezy investigation.

The co-stars of the film are no slouch either, and feature some great performances from both Jack Elam (1981’s The Cannonball Run and it’s sequel, as well as roughly 4,234 westerns) as one of the aforementioned trappers, and The Wild Bunch‘s Dub Taylor as Orville’s “Grandpaw”… not to mention ex-footballer Roy Tatum who was inside of the simple but effective Bigfoot costume, because that cat was energetic as fuck.

The good news is all of this is presented in one hell of a transfer from Synapse, which boasts crystal clarity and detail, rich colors, and deep blacks that make all of the flora and fauna of the swamp to come to vivid life and makes Cundey’s excellent photography truly shine!

Adding to the experience are some bonus features which include an interview with Cundey (who reveals he helped design the eponymous beastie as well), as well as the film’s theatrical trailer, and a radio spot.

Also included is an audio commentary from Fangoria/Rue Morgue’s Michael Gingold and film historian Chris Poggiali that presents a dearth of information on the film’s production.

Nearly the pinnacle in 1970’s cryptid-crazed creature features, Creature From Black Lake is fun as unholy hell, and is always worth a wicked watch, but this release from Synapse Films makes it shine like it never has before!

← Prev: 'Scream VI' Gets A Killer New Poster! Next: There Is No Escape From The House From Hell For 'The Caregiver' (Trailer) →