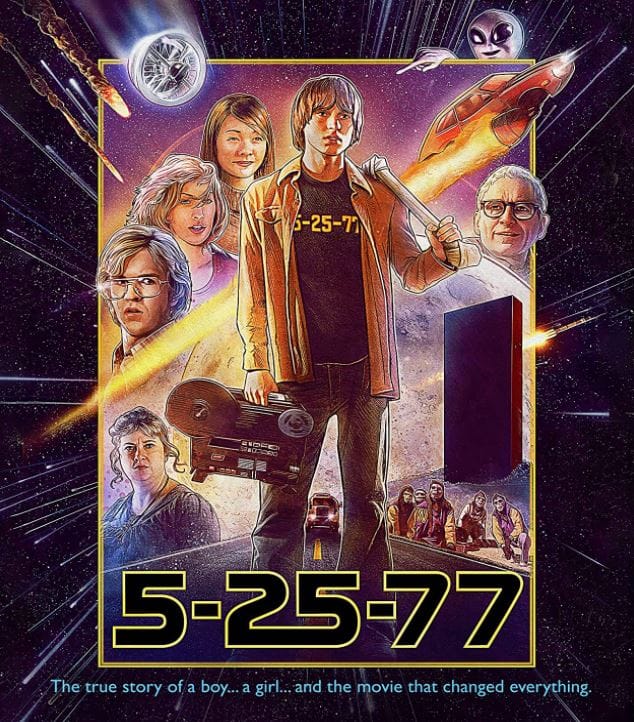 To that end he drags his friends into participating in all manner of ambitious backyard Super-8 sequels to some of his fav flicks including the likes of Jaws and Planet of the Apes… but his head definitely lies in the Hollywood hills… and thanks to a call from his well-meaning, and thankfully pushy mom he gets a chance to visit the studio where Trumball is working on the effects for Spielberg’s follow up to Jaws; 1977’s Close Encounters of the Third Kind!

As fate would have it, Trumbull is not “in the office” that day… but our hero does get to talk to Spielberg himself, and eventually gets to see a work-print of an upcoming low budget studio film named Star Wars.

With  5-25-77, writer/director Patrick Read Johnson delivers a bittersweet treatise to a life lived full of sweet cinematic nostalgia…  and primarily that, which of course leads to the detriment of our hero functioning even half-way “normal” in the eyes of his high school peers.

It’s that blind love of movie magic that’ll resonate with those this film is truly meant for; the real-life Pat’s in the audience. Johnson created this film to explore his youth and what lead him to a life dedicated to special effects flicks and becoming a filmmaker, and his journey is one that anyone with a desire to create movie magic will appreciate and relate to.

And let’s be honest; if you look at this film’s title and immediately recognize those numerals you are in safe hands with this one cats n’ creeps!

As fate would have it, the journey 5-25-77 took to get to the screen is just as passion-filled as the film’s narrative, and the entire process is explored in the bonus material present on this Blu-ray release from MVD Entertainment via an audio commentary with Johnson (moderated by Seth Gaven, founder of the A.V. Squad and editor of the film Spaced Invaders… which Johnson wrote by the by) and a Q&A from the 2013 Fantasia Film Festival (also with Johnson).

Also included are a trio of photo galleries, as well as a collection of trailers for the film.

Simply put; 5-25-77 is a wonderful, heartfelt underdog story presented with a galaxy of sweet, sweet nostalgia and absolutely shouldn’t be missed by anyone bitten by the filmmaking bug!