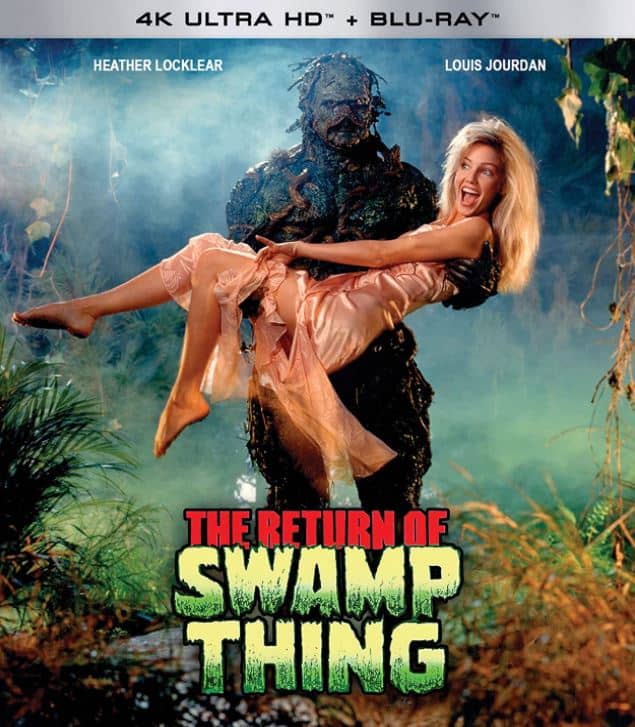 Something bizarre is going down in the bayou; there seems to be strange creatures stalking the swamps…and by strange I mean even weirder than our moss encrusted walking vegetable of a leading man; namely Swamp Thing his own damn self (once again played with heart and conviction by the late great Dick Durock)!

Naturally the monsters are the result of the machinations of Swampy’s old nemesis, the mad doctor Anton Arcane (Louis Jourdan…reprising his role from the first film even thought he turned into a hedgehog beast and was destroyed at the end of the previous picture…1982’s Wes Craven helmed opus Swamp Thing), who is none to pleased our evergreen hero is still walking around handing out ass beatings to whatever mutant he comes across.

Adding to the dynamics is the arrival of Anton’s beautiful step-daughter Abigail (Heather Locklear); a new age type that is really into plants (and by the end of the picture you can guarantee she wants plants to be into her as well) and is rescued by Big Green after she is incarcerated by her crazed relation, as well as two kids Omar (RonReaco Lee) and Darryl (Daniel Emery Taylor) who run afoul of Arcane’s creations and befriend ol’ S.T. in the process.

Will Swampy be able to save the day and end Arcane’s reign of terror and rescue the comely Abigail?

While I am a huge fan of Craven’s opus, Director Jim Wynorski (Chopping Mall, Deathstalker II…to name a few) delivers a superior picture with The Return of Swamp Thing. While the source material was never played for laughs, it nevertheless was filled wall to wall with outrageous concepts and visuals…but under Wynorski’s supervision the story of Swamp Thing takes on an element of camp that actually works incredibly well while never taking a shit on the character or underlying concepts.

For nearly ninety minutes we are bombarded with tons of monsters, beautiful girls, comedy, and tons of action…and it’s completely glorious! I simply can not imagine anyone watching this film and not having a shit eatin’ grin plastered across their face a mile wide! I also feel the need to mention that like the first film, this entry also features child actors that actually entertain rather than annoy; Lee and Taylor have amazing chemistry and comic timing and are great fun to watch.

All of the above is featured in crystal clarity on the latest release of the film on 4K courtesy of MVD Entertainment. Working from the original interpositive, this version features a crystal-clear image boasting excellent detail, rich colors, and warm flesh-tones… which is to say, this is the best the film has ever looked… and I first viewed it on VHS, so I’ve seen my share of releases of this one my cats n’ creeps!

As much fun as there is to be had with the feature, MVD have included a monster sized collection of beastly bonus features as well (spread out over 2 discs). First up are two archival feature length commentaries; one includes Director Wynorski, Composer Chuck Cirino, Editor Leslie Rosenthal, and Lightyear Entertainment Executive Arnie Holland… and the other (an archival recording from 2003) features Wynorski flying solo. Both listens are extremely enjoyable (even though some information is repeated as would be expected) as hearing Wynorski describe the production warts and all is fascinating (and way more honest than you normally hear on these things).

Also included are a new interview with series producer Michael E. Uslan in which he reminisces on the film’s production, and a Swamp Thing related music video from the Rifftrax crew.

Moving to Disc 2 we get a Blu-ray version of the feature, as well as the previously mentioned commentaries and a bayou of bonuses not found on Disc 1!

First up comes archival interviews with Wynorski, Holland, Cirino, and Rosenthal that expand on the anecdotes present in the crew commentary.

Bringing up the rear we get a “behind-the-scenes” slideshow, 2 environmental themed P.S.A.s featuring Swampy (as well as Omar and Darryl), two TV Spots, six promotional TV Clips, a promo reel, and the film’s theatrical trailer.

If you are looking for a fantastic monster mash that also features a heaping helpin’ of laughs, action, and beautiful babes feast your eerie eyeballs on The Return of Swamp Thing post freakin’ haste; a finer fun-filled fright flick fracas you will be hard pressed to find!