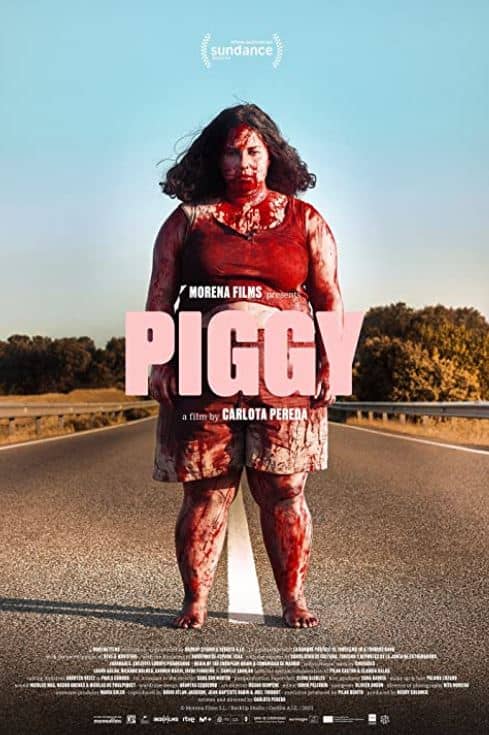 Heavy-set teen Sara (Laura Galán) spends her days toiling away in her parents butcher shop when she isn’t being bullied by the beautiful (on the outside) popular kids (one of whom was a former friend) who give her the nickname “Piggy”.

So things basically suck, and after another round of harassment, this time poolside, Sara begins the long walk home with only the swim-suit on her back. Of course she’s hounded once again by the town idiots, but things are going to change quite quickly in that department…

You see, our heroine has caught the attention of the local serial killer (Richard Holmes), who has kidnapped the girls that have been hassling our heroine… and Sara bears witness to the crime, and proceeds to clam right the fuck up about the whole affair, even as the town is sent into a frenzy that a madman is on the loose.

Speaking of that madman, after some amateur sleuthing, Sara catches up to the sinister psycho… but as the body count rises will Sara become a victim, or something else entirely?

Holy hell does writer/director Carlota Pereda hit a horror home-run with Piggy (which just so happens to be based on the director’s 2018 short film Cerdita)!

Containing the expected stalk n’ slay elements to a degree, Piggy is a surprisingly heartfelt examination of a sweet girl done wrong, and the consequences… often unexpected in nature that ripple out before becoming a veritable tidal wave.

Bringing all of that to life is no easy task, but thankfully lead-actress Galán is more than up to the job, delivering a bravura and very physical performance filled with emotion, terror, and good ol’ teen angst n’ sexual frustration. It’s a hell of a range and she absolutely soars through it!

On the opposite, though no less impressive, end of the spectrum we have our unnamed killer played by Holmes, who manages to gives a performance both menacing and at times sympathetic… with just a handful of lines of dialog. It’s an impressive display of nearly pure physical acting.

Also well worth mentioning is the sense of doom that hangs over this picture… a palpable dread that mounts and crawls deep under your skin as things go from shitty to really fuckin’ shitty for our heroine.

Bottom line; Piggy is an absolute must see of a fright flick… often unnerving but always enthralling. I dare say you won’t be able to peel your putrid peepers off this one my cats n’ creeps!

Piggy is available now on digital and Blu-ray from Magnolia Home Entertainment.

← Prev: Movie Review: The Return of Swamp Thing (1989) Next: Spoiler Free Review: You Should Be Watching "The Rig" →