A Picture is Worth A Thousand Reviews

The picture above is a series of stills from the ending of “Jaws The Revenge.” People rip on Ed Wood’s hubcaps and pie tin flying saucer’s in his “Plan 9 From Outer Space.” However, Wood had about 200 bucks for his effects budget. “Jaws The Revenge” had about six million and you get what’s in that picture?

Cynema: The cynical contempt for an audience in the making of product that is devoid of creativity, passion, production value or respect while having the financial and creative means to do better.

This Time It’s Ridiculous…Imagine you are sitting in an office at Universal Studios. You approve film projects pitched to you.  Here’s the challenge. Without any knowledge of the previous Jaws films, someone pitches you the plot for a fourth installment to the famous shark series. Would you or wouldn’t you give 20 million dollars to make this movie?

“We get Lorraine Gary to return to the Jaws series as a widowed Mrs. Brody. She loses her son on Christmas Eve to another Great White Shark. The shark is psychic and is hunting down the Brody family for revenge. A grief stricken Mrs. Brody flies to the Bahamas to be with her surviving older son. The shark follows her for vengeance. She meets and falls in love with Michael Caine. The shark attacks her other son (a diver) who, along with a “Jamaican” buddy, is a marine biologist.

The shark attacks Mrs. Brody’s grand daughter who narrowly escapes. Mrs. Brody steals her son’s boat to confront the shark. Mrs. Brody and the shark square off at sea and the film climaxes with Mrs. Brody steering the boat on a collision course for the rampaging shark. She impales it with the bowsprit through the head (which explodes).”

That is the plot for Jaws the Revenge. There was no pitch for this film. It was conceived from cynicism. It was a vehicle for a payday and a few vacations. The late comedian Richard Jeni summed this movie up best in one of his stand up acts:

The premise is bad, the script is bad, the acting is bad, the directing, the effects…the shark ROARS at the end. There are such errors in continuity and visual mistakes it is obvious no one involved CARED enough to give the slightest attention or concern to them.

Mario Van Peebles with his bad Jamaican accent found fans with Europeans. His Jake character died in the original 1987 US release. Universal re shot the ending allowing Jake to live (after massive blood loss and clearly being bitten to death by the shark) . Michael Caine was a bit more upbeat.

[Jaws the Revenge] will go down in my memory as the time when I won an Oscar, paid for a house and had a great holiday. Not bad for a flop movie.  — Michael Caine

The final insult is in the end credits: The filmmakers consulted a scientist for the making of this movie.

This consultation resulted in the following scenes:

It’s also safe to say that sharks are probably lacking in extrasensory powers to track down individual human beings like homicidal bio-GPS asassins. The original 1987 US theatrical release showed the roaring shark impaled through the head by the boat’s bowsprit. It breaks off and the dying shark sinks to the bottom of the sea.

What I can’t believe is that the director, Joseph Sargent, would film this final climactic scene so incompetently that there is not even an establishing shot, so we have to figure out what happened on the basis of empirical evidence. – Roger Ebert, 1987

Since Van Peeble’s character Jake was resurrected for the European release, the filmmakers decided to change the ending while they were at it. In the re cut the shark is once again impaled but for some inexplicable reason, explodes.

One review from Jabootu’s Bad Movie Dimension  simply posted a still of the shark’s death (click here) followed by the following text:

Upon viewing this assembly of stills from the climax (one of them, anyway) of Jaws: The Revenge, my esteemed colleague…noted, “C’mon, Ken – you don’t really need any text to support that, do you?  I mean, that’s the whole review, right?” He’s correct, of course.  How could my humble efforts mock the film more effectively than the evidence provided?

The following items are issues from the film that translate into contempt for ticket buyers:

After the shark sinks Michael Caine’s plane, he swims a good 200 yards and climbs up onto the rescue boat bone dry, his clothes not even damp from the ordeal.

Mrs. Brody flashbacks to events she was never witness to: the death of her son and her husband blowing up the shark from the original Jaws.

The robotic arm that holds the mechanical shark to its platform and a variety of cables and hoses are clearly seen in several shots, not even bothered to be covered up or at the least cropped out of the picture. (click here )

The scene between Roy Scheider and his son Sean at the dinner table copying each other is copied in this film, reminding us of just how much better the original film was.

The shark managed to swim over 3000 miles in less than 2 days from New England to the Bahamas without explanation. It also knew Mrs. Brody would be going to the Bahamas.

A sign of a weak film is the “it was all a dream” scene. Jaws the Revenge gives us two of these.

If we accept the idea that the shark is psychic and wants revenge against the Brody family then the following script issues have to be examined: Is this a new shark? Is it the same shark from the first film or related to it and if it was blown up how could it be back unless it’s a ghost? We are told that Chief Brody died of a heart attack from the fear of this shark. This is never addressed and we are to accept it.

If the shark is psychic we must accept that somehow it knew Brody’s son Sean became a deputy Amity cop. It would have to know Sean’s work schedule because we have to believe the shark pushed a chunk of wood into the channel and as a result, Sean would be summoned to free it up, setting him up for murder.

The shark would also have to know that Chief Lenny Hendricks (we assume) was sent on a call to check out “cow tipping” and therefore deputy Brody would respond to the wood pile in the harbor.

A Tale of Two Pollys

Ms. Polly, secretary to the chief of police was already in her late 60’s or early 70’s in 1975. She is mentioned but not seen in Jaws 2 almost four years later. So being conservative and saying Polly was 65 in 1975, she would be almost 80 by the time of the events in Jaws the Revenge. The woman portraying Polly in the opening might be 70, so if the shark is psychic, Polly doesn’t age. 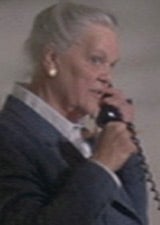 These are basic script issues that should be addressed in early story discussions and should not make it past a first draft. The filmmakers, including the screenwriter did not care. No one cared in post production either. The continuity and outright technical errors were ignored. This is what defines Cynema. Why make the this at all?

There is no way anything made by Ed Wood is worse than this. Wood was maligned by Michael Medved and deserves an apology.

[The character of Ellen Brody] had much more depth and texture than either of the other films was able to explore. The promise of further developing this multi-dimensional woman under the extraordinary circumstances. Press release for Jaws the Revenge

Studios don’t have the money to take chances on smaller, independent scripts and films, but they’ll blow almost 30 million on something like this. They released this thing with a straight face and marketing campaign. Did anyone sitting in the screening room after this was completed think they had a winner? Did they look at each other, nodding with satisfaction and say “This is good”? No. There was likely no advance screening for the cast let alone the press.

There’s nothing about movies like Jaws the Revenge that aims to entertain. They are made to fleece the wallet. Jaws the Revenge was a dishonest movie. The studio knew they had the brand name of Jaws to get people into the theaters.

The law of percentages said they would get a certain percentage of Jaws fans no matter what. They duped audiences into thinking this had some kind of return to the quality of the first Jaws film by using Lorraine Gary as Mrs. Brody. In reality, the president of Universal’s  wife (Gary) got a nice paid vacation. Michael Caine got a new house and a ticket out of California for the winter. They didn’t bother to release the soundtrack.

I’m not sure who green lighted this thing, but I’d bet they’re not working in the film industry anymore. Simply put, the script is awful—my seven-year-old daughter makes up better stories than this when she’s trying to avoid getting in trouble. – Mike Bracken, Culturedose.com

With a “hit and run” August release and no previews for the critics, Jaws 3D, made back its budget and turned a profit. From the top brass at Universal to director Joe Sargent, Lorraine Gary and Michael Caine, everyone involved knew they were making a turkey. Down to the media press kit, they insisted it was going to be good. It was shot, slapped together and tossed out to the public as damaged goods.

The sad part is, this is someone’s favorite movie for the wrong reason. Jaws the Revenge is pure Cynema.

← Prev: The Past Comes Back To Haunt A 'Girl In The Woods' Next: 'Ouija 2' Has Found It's Director And It's Star →