The True Stories Behind Some Of Our Favorite Horror Movies

In the opening scenes of many horror movies we’ve seen “Based on True Story” and it always seems to make the movies even more creepy.  The Conjuring, Annabelle, Wolf Creek and An American Haunting are just a few examples. There are many other movies influenced by true stories, but here are a few of my favorites.

This summer horror classic was inspired by a series of shark attacks that took place over twelve days along the Jersey Shore in 1916. Five people were attacked, only one survived. In July of that summer a seven foot Great White was caught. When the fisherman cut it up the middle body parts fell out of it’s stomach. The attacks stopped after the Great White was killed.

A Nightmare On Elm Street

Wes Craven has stated that he was inspired to write ‘A Nightmare On Elm Street’ by a series of articles in the LA Times in 1984 about two men from South East Asia who died during severe nightmares. Soon after, another man in his early 20’s and the son of a doctor, died while fighting sleep. The young man began to avoid sleeping. His father prescribed sleeping pills but he still would not sleep. He told his family that he feared that if he went to sleep something in his dreams would kill him. After seven days the man fell asleep on the couch. His family carried him to his room and put him to bed. After a few hours the family awoke to horrible screams. Before they could make it to his room he was dead. The autopsy could not determine the cause of death. After the funeral his father opened his closet to find a coffee maker and a hidden stash of the sleeping pills they attempted to make him take.

The movie ‘Child’s Play’ tells the story of  a killer who uses a Voodoo ritual to possess a Good Guy doll. The true story that help create this horror classic begins with a doll. As a child writer and painter Robert Eugene Otto was under the care of a Jamaican nurse who practiced Voodoo. In 1904 the nurse gave the young man a doll. Many years later the nurse, who still worked for the family, cursed the doll. The family would find things missing and moved through out the house and would hear movement coming form the vacant room where the doll was kept along with hearing screams. The family later moved from the house and left the doll behind. The next family to move into the house found the doll and began experiencing the same phenomena.

The Serpent And The Rainbow

‘The Serpent and the Rainbow’ follows an Anthropologist, played by Bill Pullman, who hears of a drug used by Voodoo priests to turn people into zombies. The movie is an adaption of a book written by Wade Davis, a Canadian scientist, of his real accounts of his time in Haiti spent with Voodoo practitioners and the drug they used to put their victims into a death-like state, to later be raised in a trance. The victims are often those who have been raised believing in the Voodoo priest’s ability to truly turn people into mindless zombies.

The Exorcism Of Emily Rose

In the 2005 film ‘The Exorcism of Emily Rose’ a priest is on trial for the death of a young woman he had given exorcisms repeatedly over a long period of time. We witness her torment through the priest’s flashbacks. Believe it or not, the movie is based on true events. Anneliese Michel, a sixteen year old German girl, began displaying signs of demonic possession. Anneliese suffered through periods of visions, self-harm, paralysis and involuntary body contortions. She suffered with no relief for several years. In 1975 two priests began the first of her exorcisms. She had repeatedly exorcised for a total of ten months,before dying of starvation in June of 1976. The two priests stood trial and were convicted of manslaughter. They each served six months in jail.

This brutal horror movie is based on the true life events of serial killer Ed Gein. Gein not only butchered his victims but made things from their body parts, including lampshades, covered furniture with their skin, made masks out of their faces and a belt out made of nipples. He also enjoyed digging up bodies from the local graveyard and bringing them home. It was never determined if he also cannibalized his victim.  He was convicted of murdering two women, grave robbing and other charges. Did I mention he had a secret room where he kept his mummified mother? Gein’s story also inspired the movie Psycho.

The Hills Have Eyes

Wes Craven based some of  the 1977 horror film on the life of Sawney Bean and his family. Sawney Bean took to living in the costal caves of  Scotland with his wife and fourteen children in the 16th century. The family would ambush passerby’s, murder and eat them. After body parts began to wash up and the number of missing people sky rocketed, the near by town began to suspect the family. Eventually the entire family was rounded up and brought before the court to stand trial.  The family then numbered at forty eight total members (mostly connected by incest). All 48 were convicted of the murder and cannibalism of over a thousand people and the entire family executed.

Bertino’s inspiration behind the movie came from the true events known as the “Keddie Cabin Murders”. The murders took place on April 11,1981 in Keddie California, a small resort community. The Cabins, where the murders took place, were rented to low income families. On the night of the murder a mother, her daughter, oldest son and his girlfriend  were savagely attacked along with the woman’s younger son and a friend. The family was bound and gagged. The mother, oldest son, and his girlfriend were killed by being hit repeatedly with a hammer then stabbed. The two younger boys survived but their sister was kidnapped. There was no sign of forced entry and there were few clues. Three years later the daughter’s skull was found by campers. The case remains open.

A Haunting In Connecticut

A Haunting In Connecticut revolves around a teenage boy with cancer. The family rents a house so that he will be closer to the hospital where he receives treatments. The house includes a basement where a locked door hides a secret, that the house was once a funeral home. Soon the boy begins getting visions of séances performed by the previous owner who also carved spells into the bodies of the people the funeral home was supposed to care for. The movie ends with the boy discovering bodies hidden in the walls of the home. He frees the spirits by burning down the home. His cancer mysteriously disappeared. The movie is based on the experiences of the Snedeker family, whose experiences are very close to the events in the movie. After the night of the fire he was mysteriously cured.

The Exorcist is one of the most important films in horror history. It’s only fitting that the film is based on a real event in history. In the movie Regan makes the mistake of playing with a Ouija board and is soon possessed by a demon. Two priests set out to exorcise the girl’s demons. The movie is based on a 13 year old boy named Robbie, who experienced possession in 1948. Detailed notes were kept daily by the boy’s father and the events witnessed by over 25 people. Robbie’s family experienced knocking, furniture moving. Witnesses saw the bed shake and levitate. People were thrown from chairs. Scratch marks would appear on boy’s body. The boy’s demons were eventually exorcised and he went on to work  for NASA.

The True story begins with the murder of the six members of the DeFeo family on November 13, 1974. The murderer, Ronald “Butch” DeFeo Jr. the oldest son of the family. Butch tried an insanity plea claiming he heard voices that told him to murder his family. He was convicted and sentenced to six life terms. The next people to move into the house at 112 Ocean Avenue Amityville, New York was the Lutz family. The family reported supernatural experiences but have stated the events were not as nearly as severe as the ones seen in the movie.

← Prev: Xander Berkeley Joins The Walking Dead For Season 6 Next: The Mist Being Made Into A TV Series → 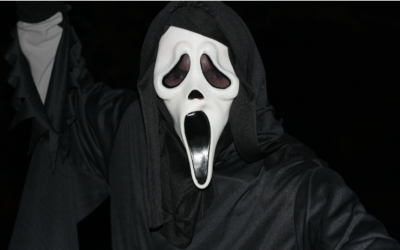 Best Horror Movies to Watch in 2022

The year brought us new scary horror movies. No one wants to come across a boring and typical movie so we want to...