Guillermo del Toro’s next project, a still untitled supernatural romance, has found its villain. Boardwalk Empire’s Michael Shannon has boarded the film, which is set in 1963.

In the film a mute laboratory worker, played by Sally Hawkins (Godzilla), falls in love with an amphibious man who’s being held captive and studied.

Richard Jenkins, Michael Stuhlbarg and Octavia Spencer will co-star along side Shannon and Hawkins. Del Toro will direct, with Callum Green producing, according to Variety. Green and del Toro have worked together before, on Pacific Rim and Crimson Peak. Rumor is, the upcoming film’s title will be The Shape of Water, but that has not been confirmed. 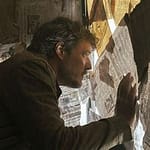 ← Prev: This 10 Minute Clip From Pride & Prejudice & Zombies Will Leave You Hungry For More Next: The Asylum Presents Independent's Day ? →