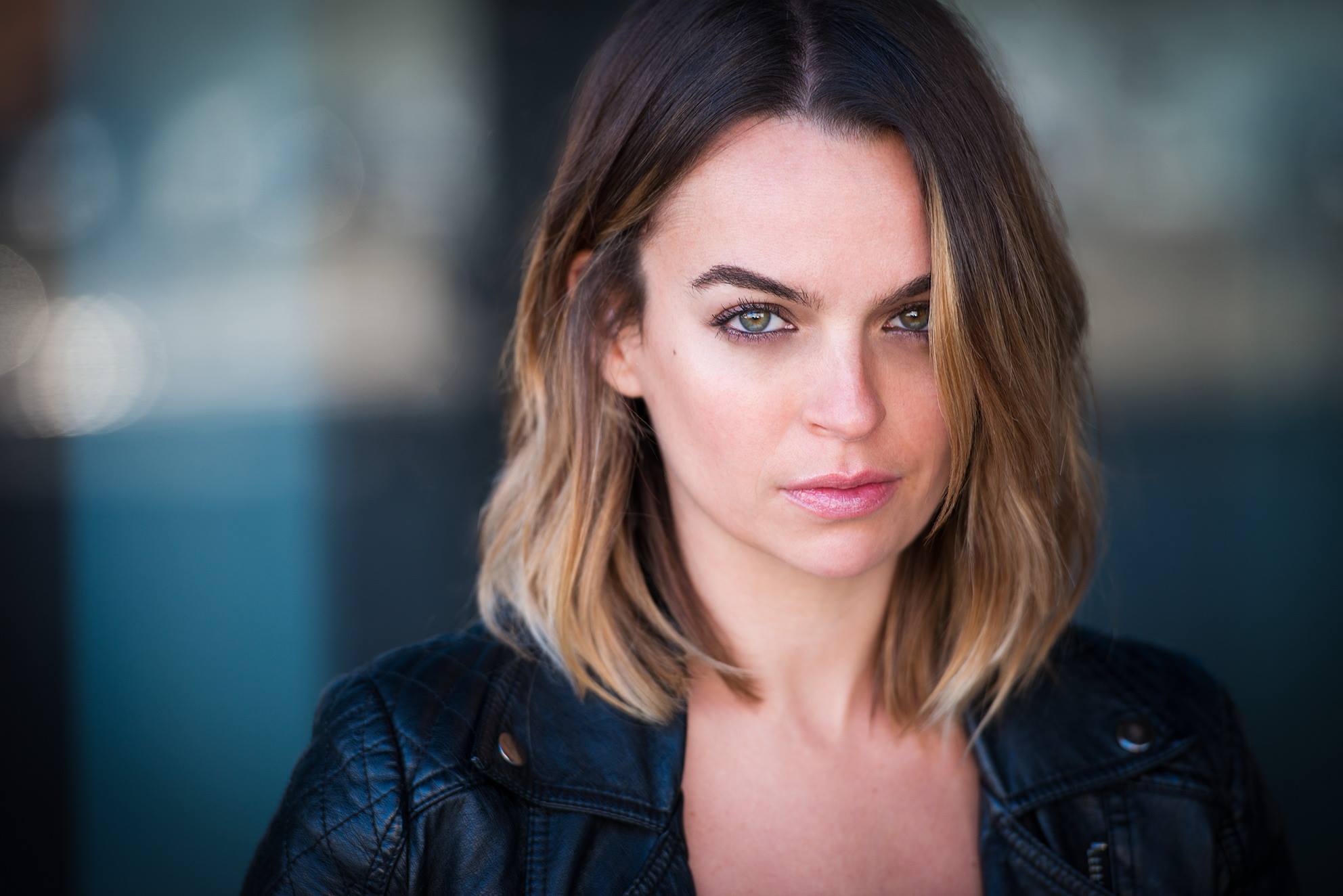 Today, I caught up with Australian actress Bianca Bradey star the indie zombie hit ‘Wyrmwood: Road of the Dead‘, who I first interviewed back in 2014.

In ‘Wyrmwood: Road of the Dead’, after a comet breaks up above Earth, much of the world’s population quickly becomes affected by a strange illness, turning them into zombies with an intense hunger for human flesh. A group of survivors has banned together. Barry (Jay Gallagher) and his group are on a mission, his sister, Brooke (Bianca Bradley), has been kidnapped by a twisted doctor who carries out strange experiments. Barry and the rest of the group head out to rescue Brooke, not knowing that the experiments have given her a new power.

A new series, ‘Wyrmwood TV‘, linked to the film, has just been announced. Bradey was willing to answer a few of my questions and filled us in on the upcoming series. We also discussed what she has been up to since ‘Wyrmood’ was released.

Horror Fuel: “The last time we talked was right when ‘Wyrmwood: Road of the Dead was coming out.”

BB: “Yeah, that was what, two years ago? We are very proud of our little indie film. We are all kind of amazed at the response we’ve had. It makes us so freaking happy. Zombies actually scare the crap out of me. It has become a weird fascination. I love anything to do with them, but they are also my biggest fear in life.”

Horror Fuel: “You’re in pre-production for the Wyrmwood series, right? I’ve seen some of the images. They are fantastic.”

BB: “Yeah, so far we’ve shot a teaser for that which the boys are doing post-production on now. It’s a seven-part series. It’s going to be very hard-hitting. They are going for sort of The Walking Dead meets True detective style. It’s going to be gritty and edgy. It’s got a lot of supernatural twists to it. They are turning the zombie genre on its head again. The concept is completely original. They are really mixing the genres. It’s going to be zombie-sci-fi.”

Horror Fuel: “Is it a continuation of the film?”

BB: “It is. It is a continuation. It picks up several months down the track. They are fighting the good fight against the oppressive soldiers. It stretched through the Australian outback as they try to get the world back. ”

Horror Fuel: “Will any of the other cast members from the film be joining you?”

BB: “Jay Gallagher who plays Barry will definitely be back. At this time I don’t even know who else the other characters will be or who is going to be involved. So far, me and Jay have been announced and confirmed. And the rest is still under wraps.”

Horror Fuel: “Will it be filmed in Australia like the movie?”

BB: “Yeah. I think the landscape in Australia is almost like another character in the Wyrmwoodverse. It has to be set in the Australian bushland. It’s very Mad Max and apocalyptic. It adds to the story.”

Horror Fuel: “Is it going to be available here in the US?”

BB: All that stuff  I’m not sure about either. They are still making deals with streaming platforms and distribution. It’s such a changing landscape nowadays. It’s amazing how things are distributed to the world and how things are shown. I think all the conventional ways we used to view TV and film are adapting and changing every single day. I have no idea how they will do it, but it will be available worldwide, I would say.

Streaming services are so important these days. I have to stay up to date on directors and films and series. I think part of my job is to set in bed 12 hours a day and binge watch things like Game of Thrones. It would be a dream to be on Game of Thrones or some Viking show.”

Horror Fuel: “I would love to see you on Game of Thrones or Vikings. You would make one hell of a Shield Maiden on Vikings.”

BB: “That would be a dream. I would love to be in that world, filled with dragons and swords and the fighting. It’s so cool. I love that type of fantasy show is in right now. I love it. I just binged watched all of Game of Thrones. It’s very hard to get in Australia so I had to watch it while I was here. It was the first thing I did when I got here [California]. It’s hard and you really have to have all of the streaming services these days to stay up to date.”

Horror Fuel: “If you ever get a chance, please audition for Ash vs Evil Dead. It’s one of the best shows on TV and you would fit right in.”

BB: “I will get my management on it. I love it. I’m pretty sure that is some of the boys from Wrymwood TV’s inspiration. They are definitely horror genre fans from back in the ’80s so, I think he might be one of their heroes.”

Horror Fuel: “Can you tell us about your upcoming film Violent Starr?”

BB: “We are in pre-production on that. That will be shot in Germany this summer, around May. It’s sci-fi. I’m going to be playing a space pirate. She is the title character. Her name is Violet Starr and she has a ship she sails through space in. She’s like a bounty hunter. They are going to be doing a lot of practical effects, like little green screen as possible. It’s going to be a throw-back to the old school which I think is very awesome. People want to see the old 80’s style where things actually get blown up and blood actually gets splattered. The monster and the ships they are creating just look amazing. You can follow them on Twitter and Facebook. The special effects and model makers are insane.”

“I’ve also been cast in Nancy in Hell, an adaptation of a Spanish graphic novel. They are going to be doing a lot of practical effects as well. She’s a chainsaw-wielding, wise-cracking, chick that gets sent to Hell and she’s fighting demons and Lucifer and the undead. It’s an R-rated graphic novel and it’s unbelievable. It’s the role of a lifetime. She is my dream character and I can’t wait to get started. I mean, she’s wielding a chainsaw, what more do you want in life? [Laughter]

Horror Fuel: ” Can you tell us about Laura and the Furrow?”

BB: “So, we are developing that, me and Jesse Haaja. He’s the director of the Finish superhero Rendel which will be released in September of this year. That’s his next feature film project that he is developing with Raven Banner. I’m signed on to play the lead in Laura in the Furrow. It is based on a Finish fable about a farm girl and the hordes that are trying to destroy her village. She ends up fighting them and they are sort of undead. That’s as much as I know about it. It is still in development and the script is still being written.

At the moment they’re concentrating on Rendel. It will be coming out later this year. I play Stacey, an assassin. She is part of a crew that is sent to kill Rendel, the title character. He’s like a Punisher-type vigilante. It’s set in Finland and it is shot amazingly. It’s stunning. The cinematography is beautiful and I think the story has a lot of twists and turns. It’s predominantly in Finish, but several characters speak English.  My character is more like a Black Widow-type assassin. She is fun to play with. That one was really fun. It is one of my favorite shoots actually. I got to work with the stunt coordinators really closely. We choreographed all the fight sequences. And got to see what I could do. I also got to do all my own stunts which were amazing. I’m really super excited about that one coming out. It’s getting a huge online following. I think that’s one to watch and the director is going to be the next big thing out of Scandinavia.”

Horror Fuel: “Are there any other projects?”

BB: “Yeah. I’ve got another one coming out this year actually, it’s called Osiris Child. It’s by an Australian director, Shane Abbess. He directed Gabriel and Infini previously. It’s also starring Kellen Lutz, Daniel MacPherson, Isabel Lucas, Luke Ford, and Rachel Griffith. It’s an all-star Australian cast. It’s more of an ensemble. It is set in the distant future and is a sci-fi/space adventure and told through chapters. In that one, I play a bar owner. She’s on a contraband planet in the middle of nowhere. She sort of rules the riff-raff. That film premiered at Fantastic Fest last year and that’s going to be released worldwide coming up very shortly, April I think.

Horror Fuel: “You have been a busy woman.”

BB: “Yeah. I have, but it’s good to get to work on really exciting and fun projects. I love that I have fallen into the sci-fi and horror and actions genres. I’m getting to play really strong female, fighter-type roles. It’s a dream. I never thought that I would get cast in those roles. It blows my mind. I love those characters. I love finding the strength in the characters. I’m all about female voices and telling stories from a female point of view, playing not necessarily a love story, but stories about women that don’t necessarily involve finding love or settling down and getting married. I love showing how they can be their own woman. I think you need strong role models.”

Horror Fuel: “It sounds like you are working all the time, but what do you do in your off time?”

BB: “I’m researching films. Right now, I’m getting into writing. I’m starting to write my own films and produce them. Other than that, I like doing things, being active. I’ve started boxing. And I like going for hikes, and anything random adventure. It’s a very new thing for me actually. I used to be a completely different person. I was a bookworm growing up. I was pretty antisocial and hated doing anything physical or activity of any kind. So, this is very different for me. Now, I want to go make my life count.”

Check out our review of ‘Wyrmwood: Road of the Dead’. If you haven’t seen it, I recommend that you do so immediately!  Hopefully, we will see the teaser soon for ‘Wyrmwood TV’. We will keep you updated!