Gary Wallace (Tom Hulce) is all hot and bothered to prove that nomadic psychic medium Martha (Rosanna Arquette) and her professional alcoholic manager (and father) Walter (Jason Robards) are nothing but first class bullshit artists… although the shit they sling does make the audience feel better that their tits up relatives are havin’ a swingin’ time behind those ol’ Pearly Gates, ya dig?

About all that; Wallace is half right as Martha has indeed been faking that shit for years… but as of late her predictions have been actual paranormal events… events that spell doom for those who’s deaths she predicts…  you know, now that I think of it, that will be really shitty for creating return customers…

Personally I had never heard of this flick until it arrived across my dread doorstep for a revoltin’ review, and now that I have I simply can’t believe it!

Directed by Mike Hodges (who directed one of my all-time fav flick’s, 1980’s Flash Gordon) this is one hell of a thriller… and my dude Mike gets double the credit as he wrote this picture as well! The narrative jumps effortlessly between a small-town con job, and a palpable eeriness as our heroine begins to develop those uncanny psychic powers… and her “visions” of picturesque afterlife vistas turns into dark, diseased hellscape where no one is gonna have a happily ever afterlife… and kudos to Arquette for making us believe every second of her character’s journey!

If there’s a negative here it’s that there is a sub-plot about a businessman and an assassin (yest these plots dovetail eventually) that isn’t given as much love as perhaps it should have so it comes off a bit underdone.

While the quality of the film is worth your dough on it’s own, Arrow Video and MVD Entertainment have included some bonus content on this Blu-ray release to give ya bit more bang for your buck!

Kicking things off we have two audio commentaries; one a new conversation with film historians Kat Ellinger and Samm Deighan (who provide their usual super informative, personable observations), and an archival track from Hodges. Both are well worth a listen, but my money is on Ellinger and Deighan’s as the better of the two.

Following those we get an archival “making of” piece, archival interviews with Robards, Arquette, and Hulce, a collection of four archival featurettes, and the film’s trailer.

All of this comes in a package featuring newly commissioned artwork by Nathanael Marsh, and a collectible booklet featuring writing from author Alexandra Heller-Nicholas, Mike Hodges and more!

Black Rainbow is pound for pound one of, if not the best, films about precog abilities out there… and the talent behind and in front of the camera make it a damn fine film indeed! 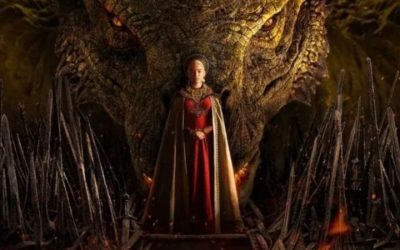 The highly anticipated prequel to "Game of Thrones," HBO's "House of the Dragon," is finally here, premiering this...