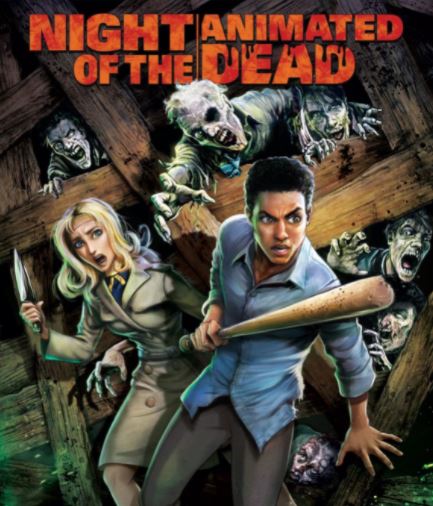 “Warner Bros. Home Entertainment provided me with a free copy of the DVD I reviewed in this Blog Post. The opinions I share are my own”

Night of the Animated Dead is, and get this, an animated version of Night of the Living Dead. Yeah, I have no idea why either…

The story of this flick is exactly the same as the George Romero directed, John Russo scripted 1968 masterpiece that made zombies into the iconic move monsters they are today:

Barbra (the Ginger Snaps‘ series Katharine Isabelle) retreats to a nearby deserted farmhouse after a ghoul attacks and kills her brother at a cemetery on the outskirts of Pittsburgh. Once there she encounters Ben (Psych’s Dulé Hill) and a handful of other survivors of what is revealed to be a full-on zombie apocalypse (quite fresh in ’68, not so much now… ).

The small band tries to keep their shit together while trying to survive the night without being eaten alive and joining the ranks of the undead themselves!

Outside of showing a few things the actual film doesn’t (Ben’s story of how he came to the farmhouse is showcased here), the story is nearly identical… and here we stumble on to this film’s greatest stumbling block; why does it even exist?

One could argue that a fully animated NotLD could be pretty damn sweet if it contained elements of the story not able to be presented by the original source materials shoe-string budget, or was presented in a stylistic manner unique to the animator’s vision.. but this film doesn’t do any of that really.

The animation is flat as hell and absolutely boring, nothing is really added to the established mythos… some of the backgrounds are pleasant, so there’s that. It’s also surreal to see the familiar events in color, rather than the moody black and white photography of the original.

Also, arguably the most iconic figure the film presented was the first ghoul Barbra and her brother encounter in the rural graveyard, played in the ’68 version by Bill Hinzman (and spun-off into a sort of unofficial sequel of his own in the form of 1988’s FleshEater), is just replaced by what looks like one of those hobo clown figurines and he’s bald… WHYYYYY?!!

There is a ten-minute behind-the-scenes featurette here that doesn’t really add much to the “Why does this exist?” debate, and serves as this Blu-ray releases sole bonus feature.

Worth it for hardcore fans only as a curio piece, Night of the Animated Dead is as useless as a salad bar would be to the gut-munchers that populate the film.