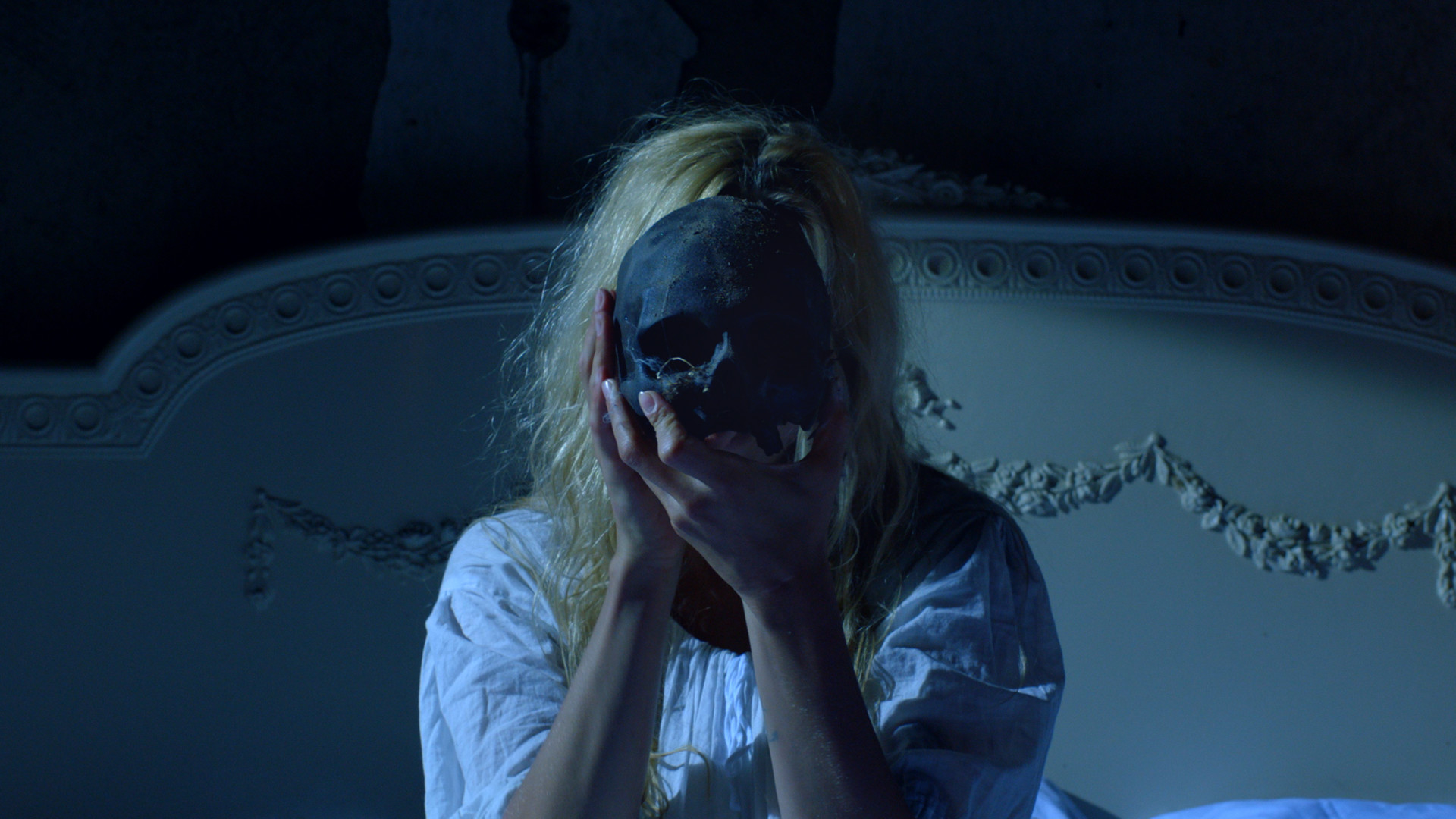 Dawn Breaks Behind the Eyes

Similar to how films like The Strange Color of Your Body’s Tears and Berberian Sound Studio have evoked giallo, director Kevin Kopacka’s Dawn Breaks Behind the Eyes (Germany, 2021) draws its inspiration from European arthouse films, of the horror genre and otherwise. It’s best to go into this outing cold, so I will only give a brief, spoiler-free set-up regarding its plot: Margot (Luisa Taraz) and her husband Deiter (Frederik von Lüttichau) have inherited a remote castle — with Bava influences in more than just lighting — and as the tension between the couple rises, gothic-horror madness sets in. Try learning nothing more than that for maximum surprise from the film. Kopacka, who cowrote the screenplay with Lili Villányi, has crafted a mind-bender of a movie that fairly drips eerie atmosphere, with scenes that range from the tried-and-true method of having off-screen occurrences for viewers to fill in with their imagination, to a graphic gore scene guaranteed to make male viewers squirm. The mise en scène is stunning, wonderfully captured by cinematographer Lukas Dolgner. The cast is terrific, including Anna Platen, Jeff Wilbusch, and Elena Gomez Alvarez in roles that I won’t describe here so as to avoid spoilers, Aficionados of arthouse fear fare should get a real kick out of Dawn Breaks Behind the Eyes.

Director Pierre Tsigardis delivers witch horror of the baby-eating, curse-casting kind in Two Witches (U.S., 2021), a feature inspired by 1970s Italian horror that serves up a few Easter eggs but doesn’t fall into slavish pastiche. The film is presented in two parts and an epilogue, the first of which, “The Boogeywoman,” finds pregnant Sarah (Belle Adams) being given the evil eye by a strange elderly woman at a restaurant. She feels emotional and physical effects after the incident but her partner Simon (Ian Michaels) chalks it up to her pregnancy. They visit Simon’s friend Dustin (Tim Fox) and Melissa (Dina Silva), both of whom are into different areas of the occult. Somehow none of the foursome seem to have ever watched a horror movie before, because they pull out a ouija board and try to contact whatever spirit may be bothering Sarah. Astute readers might surmise that this will not end well for any of those four characters, and they would be right. The second chapter, “Masha,” features a terrific, all-in performance from Rebekah Kennedy as Masha, a strange young woman who we meet attempting to strangle the man she is having sex with before freaking out her roommate Rachel (Kristina Klebe), first by telling her that she (Masha, to be clear) will become a witch after a relative of hers dies, and then by pulling a trick out of the Single White Female-style bag at Rachel’s place of employment. The latter makes Rachel kick Masha out of the house, with shudder-inducing consequences, but not before Masha goes full-on psycho-witch mode at a party, where the two stories begin to become connected. The epilogue reveals the bigger picture that Tsigardis has in mind for the world of Two Witches. Kennedy and Adams give standout performances, the former with her gleefully creepy take on her character that stops short of going into scenery-chewing territory, and the latter starting off with perhaps the most grounded performance before getting the opportunity to take her character in another direction. The practical effects are plentiful and well-realized, from gory physical attacks to chilling make-up work. Tsigardis presents a solid blend of suspense, eeriness, and jolts, and another installment in his unsettling witches universe would be most welcomed.

Dawn Breaks Behind the Eyes and Two Witches are both nominated for Best Feature Film at FilmQuest, which runs October 29–November 6, 2021 in Provo, Utah, with a virtual version from October 29–November 14. For more information, visit http://www.filmquestfest.com/.

← Prev: Shudder Moves Up Premiere Of French Horror Film ‘The Advent Calander’ Next: A ‘Puppet Killer’ Is On The Loose This November →