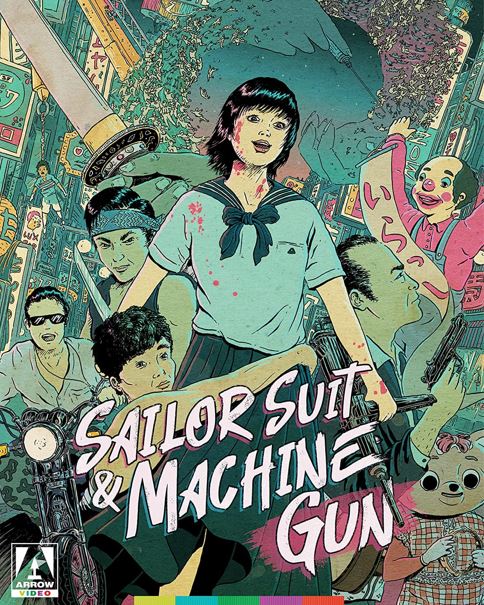 Since the head honcho of a local Yakuza family just shook hands with the ol’ Grim Reaper, the next in line to take the reigns is none other than his estranged daughter… spunky, goofy, pretty fuckin’ ridiculous in every respect, high school student Izumi Hoshi (idol singer Hiroko Yakushimaru)!

Izumi is more than ready to become a delinquent, and immediately abandons school (though the sailor suit remains… and yes, she weilds a rather angry machine gun as well at times)… though at first she isn’t sure that livin’ in a gangsta paradise is for her… but soon she actually takes to the role and ,along with a quartet of henchmen, begins to become a presence in the underworld… but will she manage to keep ahead of the game, or be swallowed by it?

I have to tell you, reading that above synopsis I wouldn’t blame you for expecting a wall-to-wall, live-action anime style romp chock-full of arterial spray, wirework, and maybe a yo-yo weapon of some sort… I wouldn’t blame you, but man would you be wrong.

Here’s where I’m of two minds on Sailor Suit & Machine Gun… on one hand it’s a real gritty, street-level, punk rock type of an affair, which appeals to me greatly; we get a bizarre firecracker of a heroine caught up in the world of organized crime, and assisted by not the greatest of gangsters, who deals with the whole mess that is adolescence while becoming a surrogate mother to her late father’s troops. It’s cool stuff through and through, and the handheld camerawork, odd framing and lens choices, and surreal (yet real… let that sink in) locations make it a visual knock-out.

On the other, the film’s janky-as-all-fuck pacing really works against it.

The narrative takes it’s sweet-ass time going… well everywhere, and the lack of action on screen for long stretches of time makes this feel like it’s just one p.h. away from being one for the ages (and in Japan I know this spawned TV shows, more movies, etc,) and that’s kind of a bummer.

As for extra features on this Blu-ray release from Arrow Video, we get a nearly hour-long documentary featuring actor Akira Emoto, film scholar Chika Kinoshita, Somai biographer Tatsuya Kimura and Sailor Suit assistant director Koji Enokido exploring the film’s production and legacy, as well as the career of it’s director, a collection of trailers and TV spots, and an image gallery.

Despite it’s pace, director Shinji Sōmai (working from a script by Yōzō Tanaka… itself based on a novel from Jirō Akagawa) delivers an enjoyable Yakuza flick with a great heroine in the one-of-a-kind Yakushimaru (who also provides the film’s snappy theme song), and that makes Sailor Suit & Machine Gun well worth a watch!

← Prev: 'Martha Is Dead' Gets February Release Date Next: Blu-ray Release: Dark Shadows and Beyond: the Jonathan Frid Story (2021) →