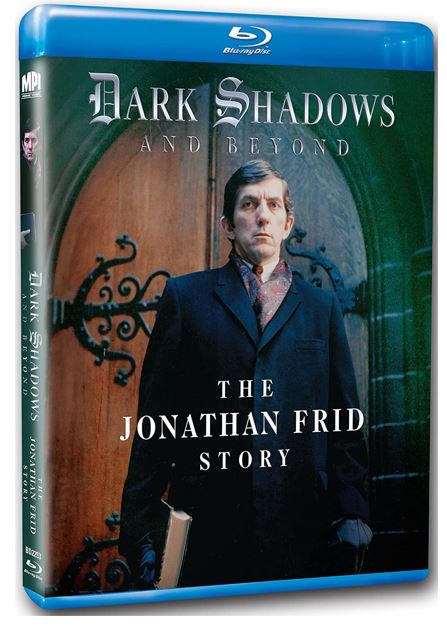 You lot know I love me some Dark Shadows; Dan Curtis’ ground-breaking 1960’s soap opera filled to the brim with Gothic atmosphere, witches, werewolves, and of course vampires, and it’s with that last denizen of the creature feature that the series featured it’s most enduring icon, the undead Lord of Collinwood, Barnabas Collins… played by to suave perfection by Jonathan Frid… speaking of which…

Dark Shadows and Beyond: the Jonathan Frid Story, the new Blu-ray documentary release from MPI Pictures will either delight you with tales of showbiz and theater, or aggravate you if you want to know the man himself.

What this film does right is explores in great detail the entire breadth of Frid’s work, from stage, to television, to movies, and back again; the man was an impressive actor with dozens of memorable performances under his belt before he even slipped in those enamel canines and set about putting the bite on Collinsport, Maine.

Of course much time is spent with Barnabas and his dark journeys through both television and film (and onward to become a heavily merchandised commodity), as well as the theater work Frid participated in once the doors to Collinwood slammed shut (only to be opened in the 90’s for a rather swell TV update, as well as in the 2010’s courtesy of Tim Burton’s campy take on the material).

As mentioned previously, what isn’t covered in depth is an examination of Frid the man. We get some hits and references to his sexuality (which as best as I could figure hovered between asexual and homosexual), as well as the off-beat company he once kept, and the often odd professional choices he made… and that’s about the lion’s share of that.

What doesn’t disappoint however are the bonus features included on this release!

Included are PBS material featuring Frid, a performance of Part 1 of Henry IV, Frid’s reading of the Washington Irving classic; The Legend of Sleepy Hollow​, a letter to Dark Shadows from the actor, an archival Dark Shadows TV promo , a photo gallery, a collection of choice Barnabas-centric moments, and the documentary’s trailer.

If you want a fantastic overview of Frid’s career, this will be just what the witch doctor ordered… just don’t expect to sink your fangs into any details of the man behind those oversized chompers…