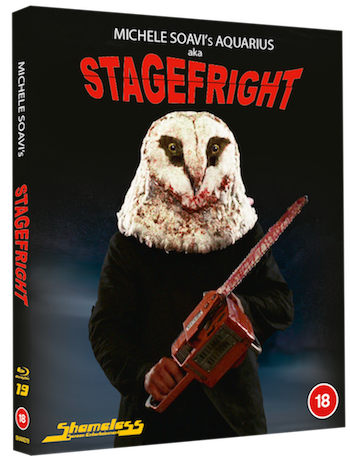 Director and master of Italian horror, Michele Soavi‘s (The Sect, The Church) 1987 horror Stagefright is being unleashed on 4K Ultra.

In the film, “when a masked killer infiltrates a group of actors rehearsing overnight in an isolated theatre, the stage is set for carnage! Featuring an abundance of over-the-top kills and spills, shot with Soavi’s typical style, marvel at the mayhem as the iconic chainsaw-wielding ‘Owl Man’, delivers a blood-soaked performance for the ages.”
Stagefright is at the pinnacle of 80s slashers. Michele Soavi was schooled by Dario Argento and Terry Gilliam and his beloved first feature can now finally be seen as intended, with this edition further benefiting from the director’s color grading and framing indications given during a candid interview filmed exclusively for this release.
SPECIAL FEATURES
– New 4K restoration
– ‘Staging the Fright’ – Interview with director Michele Soavi
– ‘The Theatre of Blood’ – Interview with actor Giovanni Lombardo Radice
– ‘The Last Performance’ – Interview with actor David Brandon
– New subtitles
– Hard-of-Hearing Closed Captions
Shameless Films presents Stagefright on 4K, UK Blu-ray, Digital, and On Demand on December 27, 2021.

← Prev: Nicolas Cage Is Dracula In New Universal Movie 'Renfield' Next: Scientists Make A Terrifying Discovery This January In 'The Superdeep' - Inspired By Real Events →