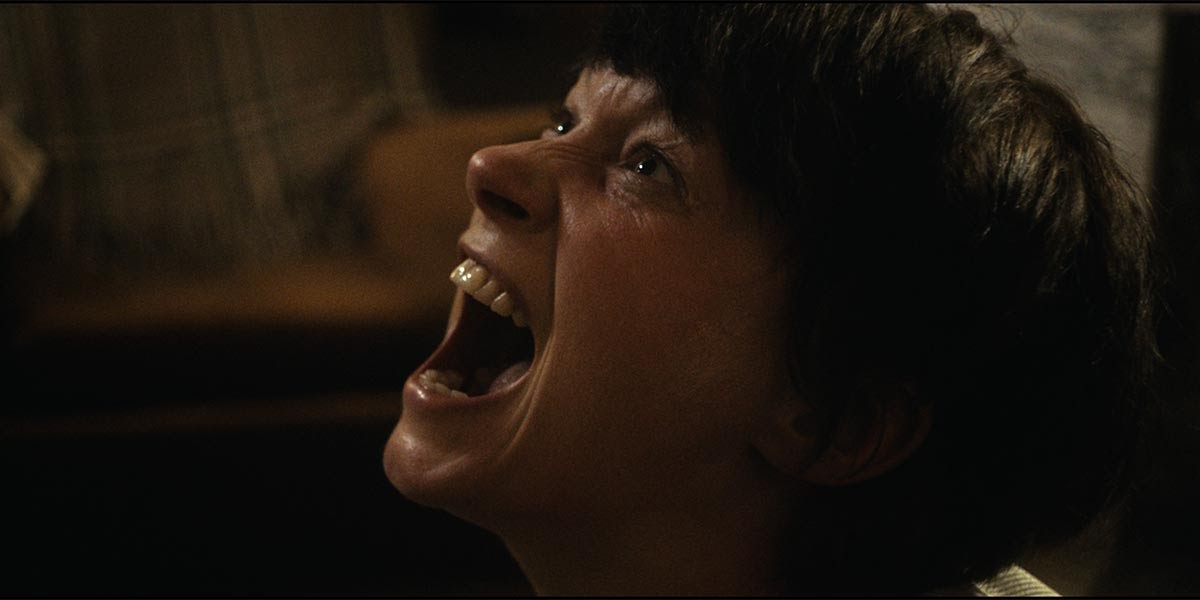 The Final Girls Berlin Film Festival hosts a bevy of superb fright fare for its 7th edition, which runs February 3-6, 2022 on the big screen and in person, with a worldwide online presentation of most of its scheduled short films. In addition to its slate of 7 fine feature films, the fest also has 8 blocks of shorts — Social Ills, Wrath, Medical Horror, Envy, Queer Horror, Midnight, Gluttony, and  Menacing Presences — on tap, along with a variety of talks and workshops. Following is the official press information.

The Final Girls Berlin Film Festival (FGBFF) is thrilled to convene once again in the flesh in Berlin for their 7th edition, running  February 3 – 6th, 2022. The festival is Berlin’s premier showcase of horror films made by women* and non-binary filmmakers and will return to City Kino Wedding for their full program of feature films, short blocks, talks by international horror specialists, and a retro screening. In addition to the live line-up, FGBFF will offer most of their short film programs online for worldwide on-demand access during the festival.

WE ARE ALL GOING TO THE WORLD’S FAIR – Berlin Premiere

A mother and daughter live in the middle of nowhere, relying only on each other. Teenager Izzy spends most of her time in nature and her home studio rocking out with her mom. Her mother doesn‘t want Izzy to go near anyone else – for fear of disaster. Is this maternal overprotectiveness, or is there something supernatural at play? This witchy coming-of-age film directed by the Adams family (mother Toby Poser, daughter Zelda Adams, and husband/father John Adams) is a thrilling and emotional ride exploring family dynamics, the changeability of identity and notions of power.

When a new family moves in next door, their young daughter, Megan, quickly captivates Laura (played to paranoid perfection by Andrea Riseborough), stirring up painful memories of her own daughter who died several years previously. Before long, Laura’s memories turn to obsession as Megan’s unsettling behaviour begins to convince her of something supernatural. As Laura’s determination to get to the bottom of it becomes all-consuming, her family begins to fracture and the line between the extraordinary and the real becomes ever more obscured in this haunting story about a mother’s love.

YOU ARE NOT MY MOTHER – German Premiere

It’s the week before Halloween and Char’s mother, Angela, has inexplicably disappeared. All that remains is her abandoned car. When she returns home without explanation the following evening, it becomes clear to Char and her grandmother, Rita, that something is amiss. She might look and sound the same but Angela’s behaviour has become increasingly frightening, as if she has been replaced by a malevolent force. When Halloween arrives, a night steeped in ancient myth and legend, Char realises that she is the only one who can save her, even if it means potentially losing her forever.

Molly, a woman who has just experienced a traumatic incident, is unnerved by a haunting knocking sound from upstairs in her new apartment building. As the noises become more desperate and increasingly sound like cries for help, she confronts her neighbours, but seems to be the only one that can hear them. In an unsettling quest for truth, Molly soon realises that no one believes her and begins to question if she even believes herself – a realisation that is perhaps even more chilling.

Tsidi, a single mother, is forced to move in with her estranged mother Mavis, a live-in domestic worker caring obsessively for her catatonic white ‘Madam’. As Tsidi tries to heal her family however, a sinister spectre begins to stir.

Sandra is attracted to primary post-mortem. Death is something she wants to get close to. In her quest, Sandra lands a job at the local funeral parlor. So begins her initiation into the funeral industry and the hidden world of undertaking. While studying embalming, she meets Matt (Peter Outerbridge), a lonely intense medical student.  Faced with Matt’s mounting obsession and conventional notions of love, sex, and death, Sara finds that sometimes there is a way of crossing over.

Lecture by May Santiago, adjunct professor at George Mason University

In “Queer Authorship, Spectatorship, Gaze, & Sensibility in Horror,” May Santiago examines the use of queer bodies in horror films, specifically in how horror films differ in context when the author (director and/or writer) is queer or non-queer. She will also track how the use of queer bodies and queerness has been used in horror films — from The Old Dark House (1932) to Knife+Heart (2017). Finally, she will propose the idea of a queer sensibility, where queer authors in the horror genre infuse their films that star non-queer leads with a certain brand of queerness.

HOW TO MAKE YOUR OWN HORROR FANZINE

In this 90-minute workshop, we will use the DIY format of zines to explore the alternative subcultures and obsessions of the horror community through “Top 5” horror-related prompts. There will be a brief history of zines and how historically they’ve been used to communicate alternative perspectives in horror and feminism. You will make your own 8-page zine using paper and collage-making techniques. All materials will be provided, and everyone is welcome. Witches too.

Originating from the Old Norse ‘ugglig’, meaning ‘to be feared or dreaded’, the term ‘ugly’ is now mostly used as an antonym for ‘beautiful’. Imagining the horror genre without elements of ‘the ugly’ seems almost impossible, as ugliness, often perceived as something disgusting and repulsive, forms the aesthetical basis for the horrors of the genre. In this talk, we are going to explore how ‘the ugly’ is represented in the horror genre by applying an intersectional feminist perspective. We will examine how sexism, racism, ableism, and classism still provide continuities within the idea of the ugly and, thus, in the horror genre itself.

Join us for the European launch of Bloody Women! Women Directors of Horror, a new book dedicated to women who have played an integral part of horror cinema, as creators, consumers, and critics, from the very start – shaping and supporting what horror cinema is. This launch will include a discussion about the original and timely content of the new book; a screening of an award-winning short horror film written and directed by one of the authors; and a Q&A with McCollum and Clarke on the subject of ‘Bloody Women’.

In this lecture, Adia Cullors will discuss the unique and overlooked role of Black final girls in

horror history. With their origins in 1970’s Blaxploitation, Black final girls are often depicted as being highly sexual, strong, matriarchial, and altruistic. Over the past fifty years, these women have evolved to become mainstays of high-profile Black horror films. So long as Black women have been survivors in horror they have also been targets for biting critique and controversy surrounding who should control the role of Black womanhood on screen. Using archival film reviews and opinions pieces this talk will discuss not only how Black women have evolved on the horror screen but also how, over the past fifty years, that evolution has been shaped, challenged, and embraced by Black audiences and critics.

MOTHERS, LOVERS, AND OTHERS: AN EXAMINATION OF BLACK FEMALE CHARACTERS IN HORROR FILMS

This lecture is an interdisciplinary examination of varying depictions of Black women in horror films through the lenses of gender, film, and cultural studies. The analysis is rooted in the oppositional gaze as introduced by Bell Hooks and the male gaze coined by Laura Mulvey and will explore how many experiences of Black women in film are horrific and nuanced.

Lecture by Tira Adams, host of the Mistress of the Imaginarium show

This talk will take us on tour through history, from the blues lyrics where The Conjure Woman first shows up to films like SCREAM, BLACULA, SCREAM (1974), THE SERPENT AND THE RAINBOW (1988), EVE’S BAYOU (1997), and LEMONADE (2016), ending with television shows like TRUE BLOOD (2008 – 2014), and AMERICAN GODS in order to highlight how these women evolved from only occupying the space of the feared communal outcast to being embraced for their feminist ideals, all the while taking viewers on an emotional journey that often ends in self-fulfillment.

For more information about the festival, please visit finalgirlsberlin.com 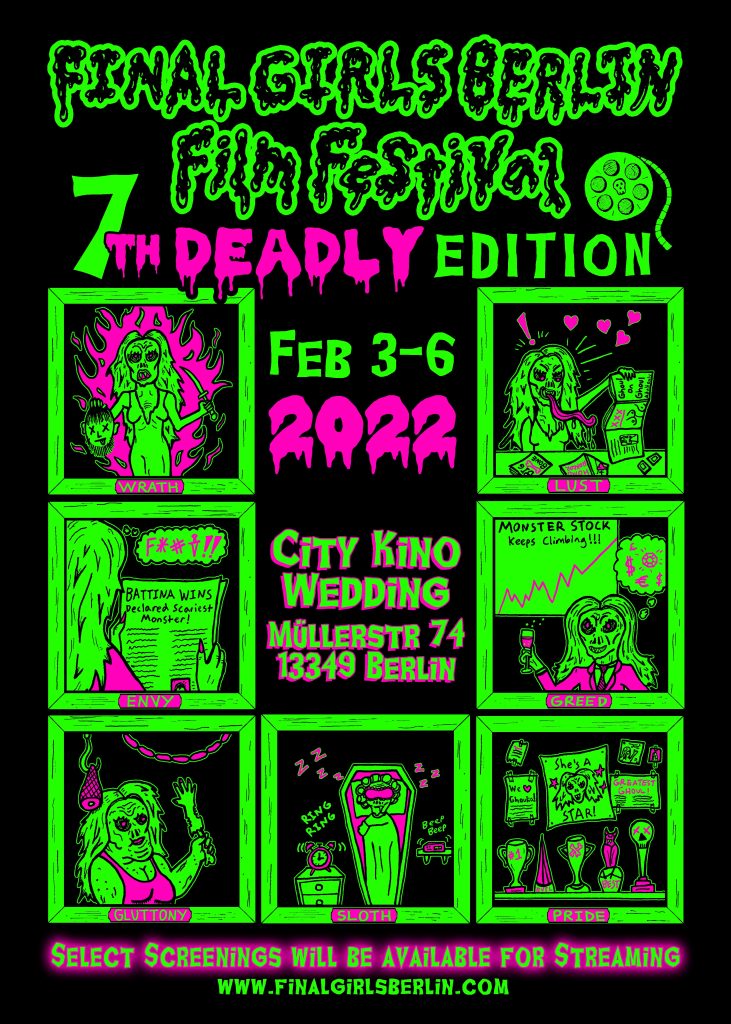