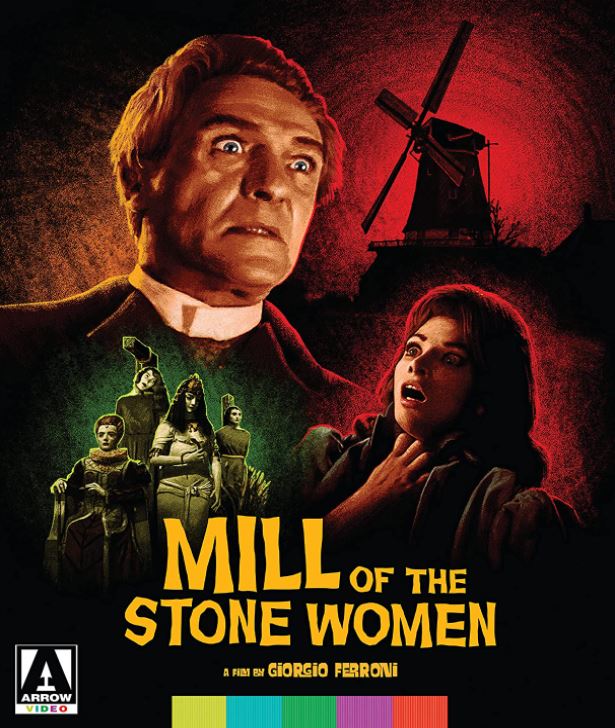 Writer-type Hans van Arnhim (Pierre Brice) sets out down Holland way to visit the eccentric Professor Gregorius Wahl (Herbert A.E. Böhme) who lives in an old windmill which contains a carousel of female statues, which Hans has been sent to research. Just seems like some shit you’d find at the Playboy Mansion during it’s heyday to me…

Any-fuckin’-how, push comes to shove, and Hans kinda/sorta murders Elfie… as one does… but she probably wasn’t long for this world as she suffers from some sort of hereditary illness or other… needless to say this sends Hans off his fuckin’ rocker quicker than you can say “Hans, you’re off your fuckin’ rocker… “!

Perhaps things may not be all they appear to be… but one thing’s for sure; our philandering hero is up to his ding-dong in terror!

Enough can’t be said of the painterly lighting and color palette chosen to bring this preternatural picture to leering life as they give the proceedings a dream-like quality that is perfectly suited to the material at hand… and the transfer utilized in this Arrow Video Blu-ray release is absolutely, jaw-droppingly beautiful, featuring some of the richest color presentation I can remember seeing in a damn sight.

Speaking of “sights”, wait until you lascivious lot set eyes upon the miniature utilized to bring that eponymous mill to life in some sequences… it looks like complete dogshit and isn’t helped by the preposterously small scale it was built at coupled with the flat way it was shot (with next to nothing to mask it’s artificiality such as that fog we talked about earlier for instance… there’s like some weak-ass cigarette smoke blowing lazily by, but c’mon! ), but I absolutely love it for all it’s tacky charm!

Equally charming are the bonus features contained on this release… okay, maybe they’re not “charming” but they’re damn awesome!

First up we get no fewer than four cuts of Mill of the Stone Women; the 95 minute Italian and English language export versions, the 90 minute French cut (which contains more character interactions not contained in the other versions), and the 95-minute US version (containing alternate dubbing from the export version, and a different order for some scenes).

Next comes a fantastic audio commentary courtesy of author Tim Lucas that takes us on a lively journey through the film’s production, followed by a new visual essay covering those stone-cold (literally) ladies of Gothic horror by author and critic Kat Ellinger and a newly edited featurette containing archival interviews with actress Liana Orfei and film historian Fabio Melelli.

Also included are an archival interview with actor Wolfgang Preiss, opening titles from the UK (titled Drops of Blood) and German releases (the print of which has seen way better days) of the film, and US & German theatrical trailers, and a series of image galleries (which include some gorgeous hand-tinted lobby cards).

The extras continue on to the packaging for the film as we also get a reversible sleeve featuring new artwork by Adam Rabalais, an illustrated collector’s booklet (featuring new writing on the film by essayist Roberto Curti, an in-depth comparison of the different versions of the picture courtesy of Brad Stevens, and a selection of contemporary reviews), a fold-out double-sided poster, and six double-sided, postcard-sized lobby card reproductions.

Mill of the Stone Women is a masterpiece of tone and atmosphere with enough ornate sets, eye-poppin’ color, and Gothic goings-on to have horror hounds droolin’ for days!